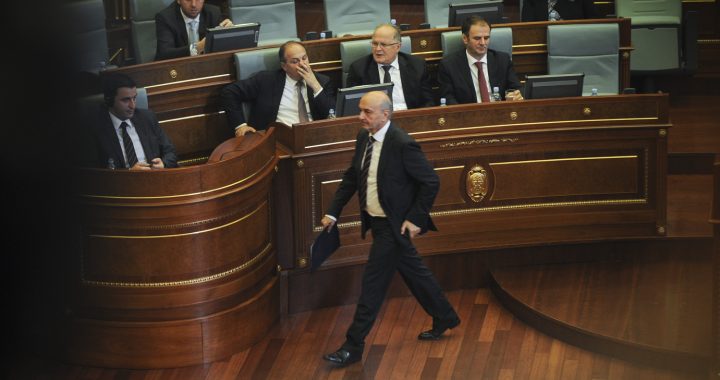 The Kosovo Assembly votes to dismiss the government

With 78 votes for and 34 votes against, the Kosovo Assembly passes no-confidence motion against the Mustafa government.

After a day of heated debate amongst governing coalition MPs, the Kosovo Assembly voted for a motion of no-confidence against the Mustafa-led government, paving the way for early elections. The motion was passed with 78 votes for, 34 against, and three abstentions.

The motion was initiated by the Initiative for Kosovo, NISMA, last Friday when the opposition party managed to gather 42 signatures. Opposition parties have been protesting the border demarcation agreement with Montenegro and the establishment of the Association of Serb-majority Municipalities in and out of parliament for almost two years. Since October 2015, opposition MPs have used whistles, water and tear gas to disrupt Assembly sessions.

“Today the sovereign decided, the MPs finally decided, and this government is finished. This government will be remembered for not taking any decisios. We will go to elections,” said Pal Lekaj, the head of the parliamentary group Alliance for the Future of Kosovo, AAK. Lekaj’s party has been opposing the demarcation deal with Montenegro, claiming Kosovo would lose 8,000 hectares of land.

The bill was temporarily pulled back by PM Isa Mustafa in September.

“We did not know until the final moments whether or not the [no-confidence] motion would pass, but we said it would be good to vote on it,” declared Glauk Konjufca, Vetevendosje MP. “There are many reasons [for the vote] but one of those would be the last opinion polls. Isa Mustafa cannot be a governing partner.”

Zenun Pajaziti, head of the PDK parliamentary group, said that each of the PDK MPs should vote in line with the will of the people.

“This country has stagnated in economic development and job creation,” Pajaziti said, indicating that PDK MPs would support the opposition’s motion.

Prime Minister Mustafa took the floor to criticize the motion, calling it a “political pamphlet.”

“This motion is aiming to destabilize the country and is hiding the addresses of those who cost the country millions of euros in damages,” said Mustafa, who also criticized the legislature’s performance.

“The MPs spend more time in the buffet than in the room. No meeting of this Assembly has ever started on time,” said Mustafa, who added that his government had no corruption affairs. In 2015, however, BIRN wrote about Mustafa’s own sons winning a government tender.

“This government is so miserable that there is no need to oust it; it is ready to oust itself,” said a visibly amused Glauk Konjufca, Vetevendosje MP, as Mustafa left the room.

For hours LDK and PDK MPs blamed each other for the failures of the government.

“LDK needs to go back to its roots, to its real power,” declared LDK MP Vjosa Osmani, saying that a new coalition with PDK would be unimaginable since “criminality is in PDK’s genes.”

The Kosovo Central Election Committee declared that it was prepared to organize snap elections, which need to be called by the Kosovo President in the next five days. General elections would then be held no sooner than 30 days and no later than 45 days.