Kosovo has stepped up exhumations of suspected graves of people who disappeared during the 1998-99 war, amid suggestions from officials that a deal could be reached with Serbia to help find the remaining missing persons.

Kosovo’s Institute of Forensic Medicine began a new exhumation of a suspected war grave this week in the mountain village of Koshare/Kosare in the west of the country as the authorities stepped up efforts to find around the remaining missing persons from the 1998-99 war.

Exhumations at six other locations have recently been completed, but the remains of only one person were found, the head of Kosovo’s Missing Persons Commission, Andin Hoti, told BIRN.

“For June and July, some exhumations in different cities are planned, but because of the emotional burden on the families of missing persons I cannot mention all the locations,” said Hoti, whose father was one of those who disappeared during the war.

The one recent exhumation that did yield results was at a graveyard in the village of Leshan/Lesan in the Suhareka/Suvareka municipality. The EU rule-of-law mission in Kosovo, EULEX, told BIRN that the search was launched after “a person saw the remains on the surface while opening a new grave at the cemetery”. The remains of the body that was found have now been sent for DNA analysis and identification.

As well as the newly-launched exhumation in Koshare/Kosare, a village nestled in a hard terrain between Kosovo and Albania, orders from Kosovo’s Special Prosecution Office are still pending for searches of terrain in the villages of Has in the Prizren municipality, Javor in the Malisheva/Malishevo municipality, and Llapushnik in the Drenas/Glogovac municipality.

There has been speculation that prosecutors at the Kosovo Specialist Chambers in The Hague, which is prosecuting former Kosovo Liberation Army guerrillas for wartime crimes, want to conduct searches for bodies at some of these locations.

The Specialist Chambers are highly controversial in Kosovo, where they are seen as an attempt to defame the KLA’s wartime struggle for liberation from repressive Serbian rule.

One Kosovo forensic expert told BIRN on condition of anonymity that the suspected war grave locations in the villages of Javor and Llapushnik are “the most sensitive cases”.

“It’s most likely that in these locations for which court orders are still pending, the Specialist Chambers will conduct searches independently,” BIRN’s source said.

Based on Kosovo’s Law on the Specialist Chambers, cooperation with the Hague court’s officials is mandatory, as is compliance with any request for assistance, order or decision issued by the court or its prosecutors. This includes crime scene investigations and the exhumation of grave sites.

Hoti said that the Kosovo Government doesn’t have any information about any exhumation done by forensic experts from the Specialist Chambers.

BIRN contacted the Specialist Prosecutor’s Office in The Hague but it declined to comment about any potential exhumation in Kosovo. 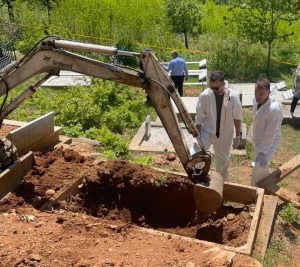 A recent exhumation in the city of Mitrovica. Photo: Institute of Forensic Medicine.

While Kosovo’s forensic investigators have stepped up their activities, there is currently no ongoing exhumation in Serbia, where the bodies of many ethnic Albanians who were killed by Yugoslav troops and Serbian police and paramilitaries during the war were reburied in a massive cover-up attempt.

Last month, Serbia’s Commission for Missing Persons announced that an exhumation had been halted at the Stavalj mine near Sjenica in south-west Serbia, where Kosovo Albanian victims of the Kosovo war are suspected to have been buried, because there were no indications of any potential human remains at the site.

Veljko Odalovic, the head of Serbia’s Commission for Missing Persons, said that “more than 7,000 cubic metres of loose earth were removed from the site and every square metre that was suspected to be a potential grave was searched”.

Kosovo responded by accusing the Serbian authorities of non-cooperation and saying that more satellite images of the suspected mass grave site are needed to determine the search should continue. Kosovo is convinced that Serbia is not doing all it can to find the remaining mass graves in a continuation of a cover-up to hide its crimes dating back to Slobodan Milosevic’s rule.

But Odalovic insisted Serbia “has not been obstructing Pristina’s requests in any way”, arguing that this was proved by the exhumations of the bodies of 914 Kosovo Albanians at Batajnica, Petrovo Selo, Lake Perucac, Rudnica and Kizevak, as well various other exhumations that did not yield any human remains. He promised that Serbia is ready “to check any information that could indicate and point to the discovery of individual and mass graves” and insisted that “there is no place for politicisation in that process”.

Officials on both sides have made hints that there could be progress towards a deal aimed at helping to locate the remaining missing persons, but nothing concrete has been announced so far. During the ongoing EU-facilitated dialogue between Belgrade and Pristina aimed at normalising relations, one of Pristina’s negotiating team said in 2020 there had been a draft agreement to set up a joint committee with Serbia aimed at finding the remaining people who disappeared as a result of the war, but no more details have been made public since then.

Serbia’s President Aleksandar Vucic also hinted last week, after meeting German Chancellor Olaf Scholz in Belgrade, that “we are close to fully completing an agreement on missing persons”. However, Vucic did not reveal any more about what might be in the agreement.

Meanwhile, Serbia and Kosovo have repeatedly asked each other to open up wartime military archives in an attempt to shed light on concealed burial sites, but no steps have yet been taken to do this, serious disagreements remain between Pristina and Belgrade over the issue of wartime archives, and significant progress on this currently appears unlikely.

When the 1998-99 Kosovo war ended, a total of 6,044 people were registered as missing. Just over 23 years later, more than 1,600 of them, mostly ethnic Albanians but also Serbs and Roma people, still haven’t been found.