Kosovo gets into rugby with its first all-female team

Come July, Prishtina’s R.K. Qikat will be on their way to the sunny beaches of Bulgaria, but the team are not there to relax – mouthguards in hand, not swim gear, Kosovo’s only women’s rugby team will embark on their first regional tournament since the club’s inception in November 2017.

The women of R.K. Qikat have embraced rugby in a way not even its founder, Bronwyn Jones, could have hoped for. After only a few months of existence, the team are responsible for setting in motion Kosovo’s recognition by both the World Rugby organization and the International Olympic Committee.

Paving the way not just for themselves, but also other future Kosovar athletes, the team have launched a program for children under 12 to introduce them to the sport and foster youth support for a growing community of Kosovo rugby players in cooperation with the men’s team, the Kosovo Roosters.

For Jones, rugby, and the values and traditions associated with it, transform in Kosovo in comparison to other countries.

“Here, rugby really stops being a men’s sport. It becomes ours, kind of like playing soccer in the United States,” said Jones. “Women like the idea of a sport with values, you have to support each other, show respect, treat everyone equally no matter who they are.” 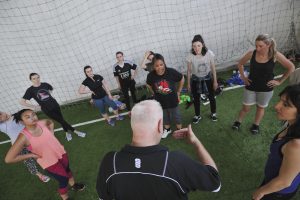 Since 2013, the popularity of women’s rugby has grown between 15 and 20 per cent in Balkan countries including Romania, Bulgaria, Croatia, Serbia and Bosnia. The sport has also grown worldwide with registered women players reaching over two million, according to reports by leading women’s rugby website ScrumQueens and World Rugby.

Despite this growth, women in rugby continue to face discrimination, even in countries with solid rugby traditions. In March, a directive from Tonga’s Minister of Education banned schoolgirls from playing rugby and boxing, stating in the directive that such sports are contrary to their cultural attitude towards the dignity of women.

A study on social barriers to women’s rugby reveals the often exclusionary nature of the sport, rooted in the perceived skills you enjoy as a rugby player – strength, aggression and physical skill. According to the report, ‘social logic’ places women outside the sport and distances them from these positive attributes of masculinity.

In the Balkans, rugby has the opportunity to develop in ways that it never will in traditional rugby playing countries. According to the study, in most places where the sport is popular, rugby continues to be a male-dominated space. It gained popularity in the United Kingdom in the 19th century as a sport played in upper-middle class all-boys schools, spreading globally as the British Empire expanded its colonial reach.

Although it is reported that 25 per cent of all players are now women, rugby still has a hard time throwing off its reputation as ‘the Gentleman’s sport.’

In Kosovo, however, this was not the problem Jones faced in finding a team. Spreading the word about rugby training in a country where only a handful of people had held a rugby ball before, never mind seen a match, proved challenging.

“For a while there was just four of us,” Jones said laughing. “We never knew whether or not it was going to fall apart, or if anyone was even going to turn up.” 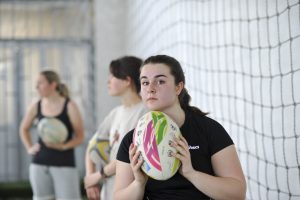 A few months and a Facebook post or 20 later, Qikat had a solid core of women to start training for real. “I think I told everyone I knew, and they laughed at me for trying,” said Jones. “But the girls started telling their friends about it and dragging them along, and we just kept growing from there.”

A gentleman’s sport no longer, Jones explained that during her social media campaigns to get players for the team, she received a message asking if the sport was only for women.

Qikat player Mimoza Dilli thinks that rugby will help to break down some of the barriers that girls face in Kosovo.

“I really like it because rugby makes you feel more powerful,” she said. “When people say that you can’t do something or they don’t believe you can do it, it just makes you want to do it even more. When my brother heard I was going to continue playing, he just laughed at me. I could hear him still laughing as I walked out the door this morning, still going to training!”

Nita Pallaska had never watched a rugby game before she started training. She explained that while she is really excited to be trying a sport a little out of the ordinary, the people around her are less inclined to join in.

“I’ve encouraged them to come along, but they’re too sceptical,” she said. “There’s a mentality here that you have to be prepared, come from a family that are totally into the sport, whereas I am fine starting without knowing anything about it at all.” 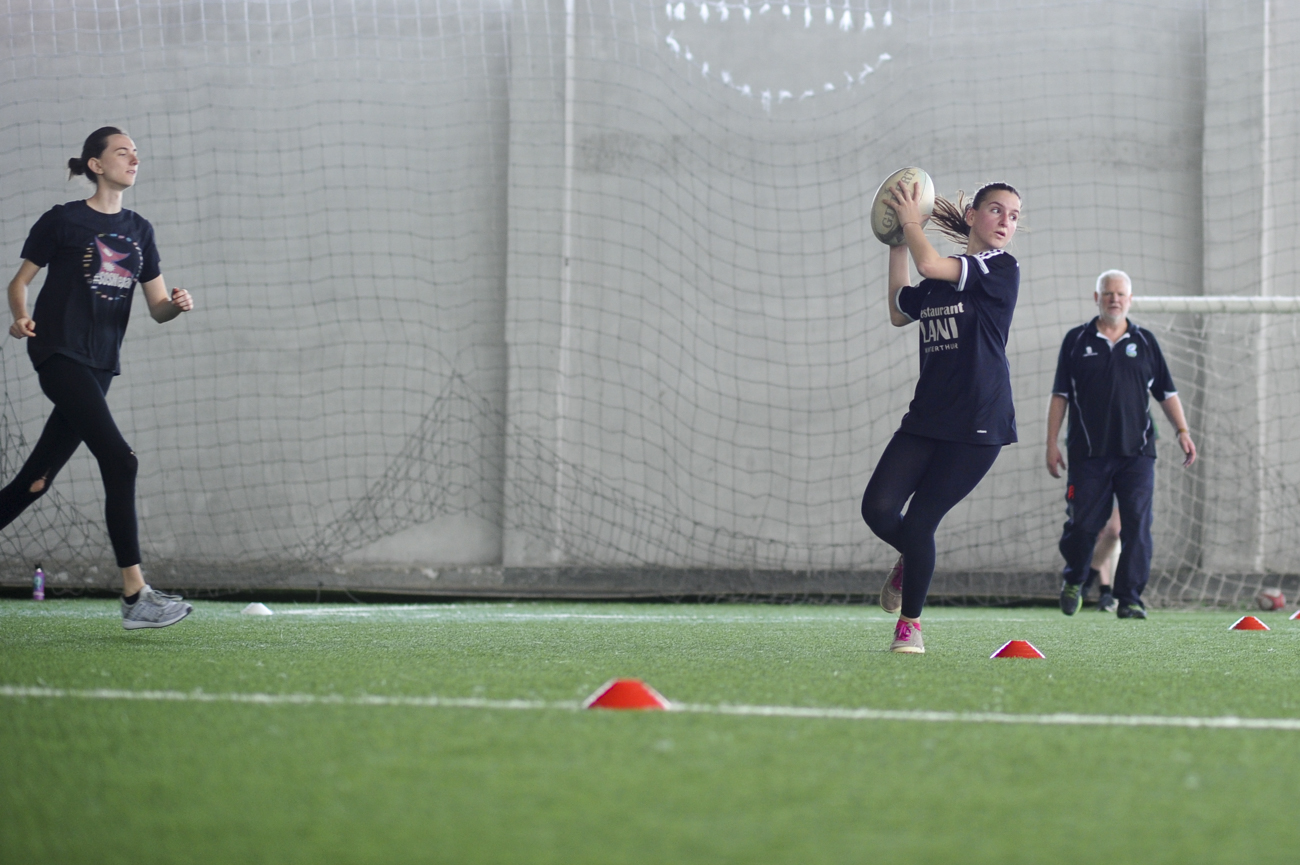 Qikat will be embarking on their first tournament this summer, as the Bulgarian women’s team are hosting a competition on the beach in July, a chance to meet other women’s teams from the region.

With leaders like Jones and Barrett, the team get to seize the opportunity to see other countries in the Balkans. The team are hoping that Bosnia will be their next destination, notoriously a country impossible for Kosovars to travel to despite its close proximity due to visa restrictions.

“The Bosnian team are relatively new as well, but they’re no joke,” Jones said. “They’re really good, they actually play in the European Championships, they’re recognized and serious about the sport.”

Bosnia and Herzegovina have fielded a women’s national team since 2005, almost ten years after the country was recognized by World Rugby for the men’s team in 1996.

On the other hand, in Kosovo, it is the women’s team that are responsible for Kosovo’s place on the map for World Rugby.

Once Kosovo has a rugby union, which requires five or more teams in different regions in the country, Kosovo can be recognised by both World Rugby, their regional association Rugby Europe and the International Olympic Committee, which would allow the players to represent Kosovo in regional and international tournaments, as well as the Olympics. 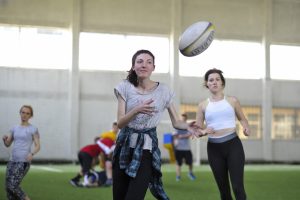 Since Rugby Sevens was officially recognized as an Olympic sport and became a competing discipline from the Rio 2016 Games in Brazil, the sport has seen a surge in popularity, explained the coach of Kosovo’s team, Mark Barrett.

“Wherever you go, there’s a bond with rugby players that is different from any other sport,” says Barrett, coach and long-time player. “I can show up in a country and if there’s any rugby at all, even one team, you automatically find yourself with a network of people and friends.”

Barrett has travelled all round the Balkans, playing and coaching in Croatia, Bulgaria, Romania and many more countries.

The team’s founders are already planning ahead. With support from the UK ambassador to Kosovo Ruari O’Connell, Jones and Barrett have also launched rugby training for children under 12 to play every Saturday morning.

“We’re having boys and girls playing the sport together, this is great for their age range and it puts the message in kids heads that ‘yes, I can play with girls and boys just the same,’” explained Jones. “The kids coming are boys who feel like they’re excluded from football for some reason, or girls that have never been given the chance to play. I think it’s really important for them.”

With Barrett’s help, World Rugby’s international program to promote the sport worldwide, “Get Into Rugby,” will be coming to Kosovo this summer, introducing rugby to kids in Kosovo and providing training certifications for teachers to continue coaching the sport.

“The next challenge is to get an under 18s team going as well, this would be something that could lead Kosovo to actually fielding a team for the Olympics one day,” said Jones.