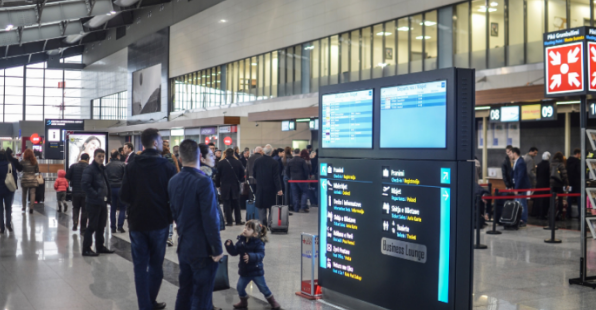 A Kosovo Government decision has placed restrictions on foreign citizens entering Kosovo based on the ‘official ECDC list,’ but the European Centre for Disease Control has told BIRN that “no list or similar exists.”

On Friday, the Kosovo Government approved measures proposed by the Ministry of Health to combat the spread of COVID-19, which included new restrictions on foreign citizens entering Kosovo.

Point 1 of the government decision states that “all foreign citizens entering the Republic of Kosovo from high risk countries, according to the official ECDC list (which is updated every two weeks), must prove through the RT-PCR in Sars COV-2 that they are not infected with COVID-19, based on the principle of reciprocity.”

The measure also applied to foreign citizens with a permanent or temporary residence permit in Kosovo, stating that residents without a negative RT-PCR test less than 72 hours old would be obliged to self-isolate for seven days.

BIRN contacted the European Centre for Disease Control, ECDC, to enquire about the “official list” referred to in the government decision. However, the ECDC press team told BIRN that no such list exists.

“Our recommendations for self-isolation and quarantine concerns just special groups such as probable and possible cases, contacts and travellers. See table on page 12 of our latest Risk Assessment on this,” the press team told BIRN. “It applies to both low and high prevalence settings, so therefore there is no list or similar that we keep for this.”

Who do restrictions apply to?

On the Ministry of Health’s announcement of the new measures, it is stated that entrance to Kosovo will “be conducted according to the risk of the state classified by the ECDC.” There is also a link to a Word Document which presents a table of data regarding COVID-19 for the European Economic Area and the United Kingdom.

Above the table it is stated that countries highlighted in red are at “high risk, so in this situation they must have a PCR test for entry into the RKS.” Spain, France, Belgium, Netherlands, Czechia, Denmark, Hungary, Luxembourg and Iceland are all highlighted in red.

However, BIRN understands that this policy is not being applied at Prishtina International Airport or Kosovo’s land borders.

Samit Krasniqi, the Coordinator for Kosovo’s National Centre for Border Management told BIRN on Wednesday morning that no change of border policy has been implemented since Friday. Krasniqi added that no list of high risk states has been received from either the Ministry of the Interior or the Ministry of Health.

Seeking clarification over the new restrictions, BIRN contacted Faik Hoti, Spokesperson for the Ministry of Health, who advised referring to the Government Decision.