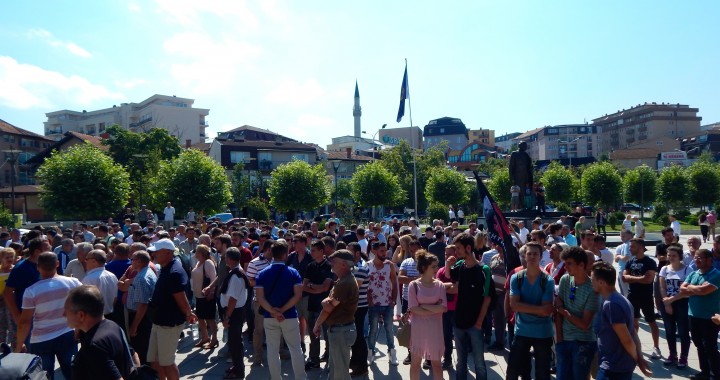 Kosovo government adopted the draft law on the hotly debated demarcation agreement with Montenegro despite continued protest from the opposition and various experts.

A heated, 12 hour-long debate took place at the Kosovo Assembly on Wednesday. Kosovo parliamentary group representatives, NGOs, and various experts presented disparate arguments on Kosovo’s demarcation agreement with Montenegro. The opposition holds out that the current deal causes Kosovo to lose 8,000 hectares of land. Yet the Kosovo government adopted the agreement and submitted it to the Assembly Thursday morning for ratification.

A government press release from Wednesday night stated that after hours of constructive debate, the agreement was deemed legally sound.

“The government of Kosovo considers that the argument confirming that the border demarcation between Kosovo and Montenegro was done in accordance with the constitution and laws of Kosovo,” the press release stated.

Border talks between the two governments opened in 2012 and both parties signed the current agreement on August 15, 2015 in Vienna. Though Montenegro ratified last year and has urged Kosovo to follow, the agreement has been a major source of contention within Kosovo parliament. The border deal has been one reason that opposition parties Alliance for the Future of Kosovo, AAK, Initiative for Kosovo, Nisma, and Vetevendosje cite when obstructing Assembly sessions, at times by releasing tear gas in Parliament.

Last year, former Kosovo president Atifete Jahjaga established an ad hoc commission for reviewing the border deal; in March this year, the commission declared that the border demarcation line is in line with international standards, the 1974 Yugoslav constitution, the 2007 Ahtisaari Plan, and the 2008 Kosovo Constitution.

The international community in Kosovo has called the agreement pivotal to EU integration.

But at the debate on Wednesday, Democratic League of Kosovo, LDK, member and professor of geography Shpejtim Bulliqi argued that the state commission, headed by Murat Meha, made major errors, and that MPs will have to consider the various arguments when voting on ratification.

“We know that the Commission did their work, but we notice that the divergences are relatively large. The MPs shall evaluate the work of the experts and the Commission,” Bulliqi said.

In his closing remarks at the debate, member of the State Commission Besim Kajtazi said that the commission did not change the borderline.

As the debate closed late Wednesday night, opposition group Vetevendosje called upon citizens to protest outside of the assembly on Thursday morning.

Dardan Sejdiu, a Vetevendosje member and current Deputy Mayor of Pristina, addressed the protesters as they shouted “down with [Hashim] Thaci, down with [Isa] Mustafa, the deal shall not pass!”

“We are not against the demarcation with Montenegro, we are against giving away land,” Sejdiu said.

At Thursday’s protest, Dukagjin Gorani, a former advisor to Hashim Thaci and current member of Vetevendosje, argued that the international community supports the current agreement because it requires less work than continued discussion and negotiation would entail.

“‘It’s just a demarcation, don’t take it too seriously’—this is the attitude of the international community in Kosovo, which seeks simple solutions and is fascinated with political groups which promise that they can deliver them,” Gorani said.

In a statement on Thursday, Vetevendosje MP Albin Kurti said that the demarcation deal would deprive Kosovo of its borders and statehood.

“There has been a war in the mountains of Rugova these past years, and I know that you have not heard of it. This deal is a deal of capitulation… the Assembly of Kosovo is being invited to legitimize this treason. Yesterday’s debate proved that the citizens and the opposition were right in general,” Kurti said.

Kurti was referring to the Kosovo highlanders living around the disputed territory between Rozaje (Montenegro) and Kulla (Kosovo). Despite the deal not having been ratified yet, highlanders have asserted that Montenegrin police have already been patrolling the area.

In his concluding statement at Wednesday’s debate, US Ambassador to Kosovo Greg Delawie disagreed that the rights and well-being of borderland residents will be abused if the agreement is ratified.

“Whoever lives there, grazes their cattle or walks in the mountainous areas will be just as free to do the same thing even after the ratification of the deal,” Delawie said.
Once a vote is scheduled to take place in parliament, ratification will require a two thirds majority vote in favor.