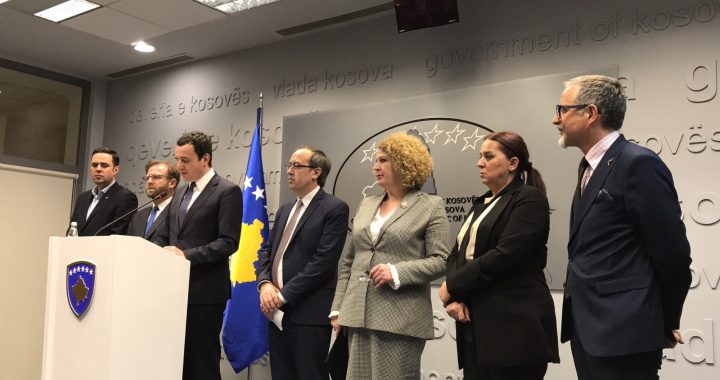 Public transport and airline services are set to be suspended as Kosovo closes its borders to foreign citizens under new measures put in place by the government to prevent the spread of coronavirus, following two confirmed cases.

Following a meeting of the Kosovo Government on Friday evening, a number of additional measures to contain the spread of coronavirus were approved after two people tested positive for the virus during the day.

The measures include the suspension of public transport and the closure of cafes, bars and restaurants, while all flights other than those organised by the military or carrying aid supplies will be suspended from 00:00 on March 16.

Kosovo’s land borders will also be closed to all non-Kosovar citizens, with returning Kosovars subject to medical checks and instructions to self-quarantine for 15 days after arrival. Entry and exit from the towns of Klina and Viti has also been banned after residents from the two municipalities tested positive for coronavirus on Friday afternoon.

A 77-year-old man from the village of Stubell near Viti, who is reported to have entered Kosovo from Italy on March 5, is one of the two confirmed cases.

BIRN was informed by the Director of Health at the Municipality of Viti, Basri Aliu, that 17 members of staff from the Family Medicine Centre in the town have gone into isolation, while the entire village of Stubell is reported to have been put into quarantine.

The other confirmed case is an Italian citizen who reportedly started working in a humanitarian centre in the village of Leskovc near Klina within the last week. The Director of Health at the Municipality of Klina, Hekuran Sejdiu, told BIRN that the centre had been closed, while all other workers have been encouraged to self-isolate.

The decisions taken by the Kosovo Government are as follows:

1. A ban on entry and exit from the town of Klina

2. A ban on entry and exit from the town of Viti

3. An immediate suspension of public transport, as well as organised international transport

4. The borders of Kosovo are closed to all foreign citizens. Returning Kosovars will be subject to detailed medical checks with the instruction to self-quarantine for the next 15 days following entry.

5. From March 16 at 00:00, all airline services are suspended with the exception of military and aid services.

6. The closure of all cafeterias, bars and restaurants

7. The closure of livestock and automobile markets

8. A reduction in the work of all public institutions besides the security and health sectors

9. All private sector employees are obliged to work from home

10. Suspension of all cultural and sports events

11. The closure of shopping malls and most retail outlets, excluding pharmacies and supermarkets.