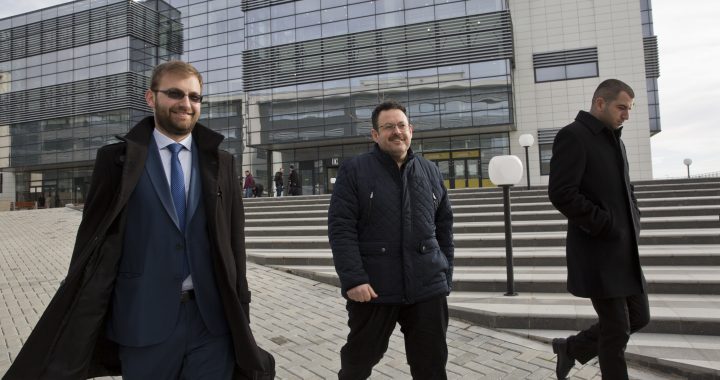 Turkish teacher Ugur Toksoy, center, walks outside the Justice Palace in Kosovo's capital PrisHtina on Thursday, Dec. 14, 2017. A Kosovo court has acquitted Toksoy of terror charges and will not extradite him to Turkey after Turkish authorities offered no evidence for terror charges against him, prosecutor Ali Rexha told The Associated Press on Thursday. | Photo: AP Photo/Visar Kryeziu, BETA.

Turkish citizen Ugur Toksoy has been granted asylum in Kosovo, following an extradition request to Turkey for alleged ties to the Gulen movement.

About five months after submitting a request for asylum, Ugur Toksoy, a Turkish national whose  extradition procedures to Turkey were terminated by the State Prosecution in December last year, was granted refugee status in Kosovo.

In October last year, Toksoy, a teacher working in the Hasan Nahi school in Prizren, was arrested by the Kosovo Police on a Turkish warrant, suspected of having ties to the so-called terrorist Feto organization, led by the cleric Fethullah Gulen.

Thousands of Turkish nationals affiliated with the cleric who lives in exile in the US have fled Turkey after the failed coup in August 2016. Turkish President Recep Tayyip Erdogan claims the coup was plotted by Gulen and his followers.

In his request, Toksoy claimed that he was politically persecuted in his country of origin and if he returned, he would suffer serious damage for political reasons.

The move comes a week after Kosovo deported six Turkish nationals in an operation involving Kosovo Police, Kosovo Intelligence Agency, AKI, and the Turkish intelligence. The six deportees, who were legal residents in Kosovo, were deported because they were  “a national security threat,” Kosovo authorities maintain.

Kosovo Prime Minister Haradinaj condemned the operation, claiming ignorance. As a result, Haradinaj dismissed both the Minister of Internal Affairs Flamur Sefaj and AKI director Driton Gashi. The latter failed to appear and report in front of the Assembly Commision for AKI on Wednesday, and has not submitted his letter of resignation yet. Both the Kosovo PM and President need to sign his dismissal. It is unclear whether President Thaci will do so.