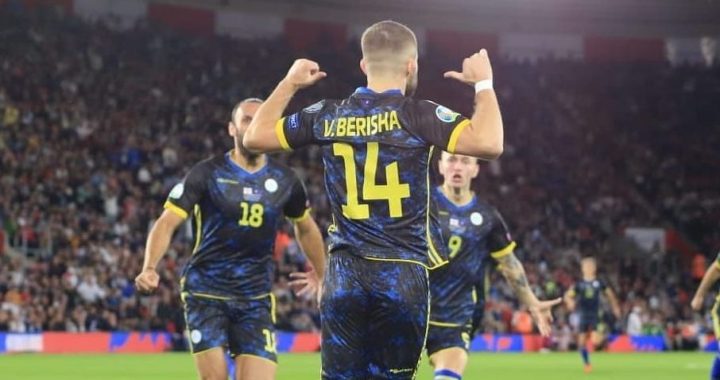 National team’s long unbeaten run comes to a crashing end in England but Kosovo show fight and resilience in 5-3 loss.

Eventually, Kosovo’s more than 700-day unbeaten run came to a conclusion with a 5-3 defeat at the St Mary’s stadium in Southampton on Tuesday night, but for more than 30 minutes Kosovo went toe-to-toe with former world cup winners England.

The first 30 seconds had been a dream for Kosovo. A mistake from England defender Michael Keane let Vedat Muriqi poach the ball just outside the penalty area, and the striker unselfishly passed to Valon Berisha, who scored an almost unimaginable opening goal, releasing a tide of Kosovar joy from all corners of the stadium.

But before 20 minutes of the match had passed, Kosovo’s illustrious opponents were leading. Keane compensated for his mistake to win a towering header from an 8th minute corner, which was then redirected by Raheem Sterling for a swift England equaliser.

Sterling, who at times played like he had the ball attached to his boot on a piece of string, tormented Kosovo throughout the first half. Ten minutes after his opening goal, he slipped away from Amir Rrahmani, who had broken defensive lines in an attempt to stop the England number 7. Sterling broke in to the space left behind and found his partner in attack Harry Kane. A few touches of Kane’s boot on the ball later it was 2-1.

Still Kosovo went forward, just seconds after conceding the second goal the visitors committed eight men to an attack, and only an unfortunate spin of the ball stopped Muriqi from having a glorious opportunity to make it 2-2 just a few yards from goal.

In the period that followed Muriqi implored his midfield to join him further up the pitch to press the England defenders, and Kosovo even enjoyed a sustained spell of possession, playing like the home team in the backyard of their opponents ranked 100 places above them in the FIFA world rankings.

For a brief moment, they were a side exuding the confidence only nearly two years without a defeat can provide, but that famous run came to a crashing end in ten brutal minutes at the end of the first half.

On 38 minutes, Kosovo’s Fidan Aliti and England’s Trent Alexander-Arnold collided near the halfway line. Aliti stayed on the turf from the impact of the collision, and many Kosovo players seemed to pause as Kane continued England’s attack.

Kane played the ball through to Jadon Sancho, whose cross was turned into his own net by Mergim Vojvoda. Head coach Bernard Challandes was incensed on the touchline, complaining his way into a yellow card from the officials.

Shaken by the goal, the gaps in Kosovo’s midfield suddenly felt like chasms. Sterling waltzed through the empty space twice in the space of a few minutes, both times providing Sancho with unmissable chances for England’s fourth and fifth goals.

Muriqi and Berisha combined again in the 49th minute to make it 5-2, the striker scooping a beautiful cross to the Lazio midfielder, who took a considered touch to free him from the attention of Jordan Henderson and place the ball firmly in the far corner of the net.

Seven minutes later Muriqi added a third Kosovo goal from the penalty spot, after England’s Harry Maguire had left out a leg for the forward to trip over in the penalty area. The Kosovar fans in all four stands of the ground let out an electric roar of approval, and chants of ‘Duam Fitore’ (‘We want victory’) rung out at St Mary’s.

The two goals though seemed to sharpen England’s concentration, last year’s world cup semi finalists again reminded that they were in a contest despite the disparity in reputation between the two sides, as well as the half time scoreline.

But somehow the hosts’ goal tally was restricted to five.

Rrahmani brought a pulsating run from England’s Ross Barkley to a clumsy end on the edge of the penalty to give the home side a spot-kick after 63 minutes, but Harry Kane, who’s penalty taking record has been almost spotless over the last year, saw his penalty saved by Arijanet Muric.

Sterling had multiple chances to add more to his, and England’s goal haul for the night, at one point inexplicably hitting the post when it seemed easier to find the back of the net.

Kosovo also made forays into the England half in search of a fourth goal, but only really came close when a Bersant Celina shot from the edge of the area whistled past the post. As the clock ticked into injury time, chants of “Edhe nje!” (“One more!”) echoed around the stadium, the Kosovo fans settling for one more goal rather than the victory they’d dreamt for after Muriqi’s goal.

But none materialised, the referee’s final whistle bringing to an end a breathless, sometimes absurd game. It also brought to an end a nearly two year unbeaten run for Kosovo, while the Czech Republic’s victory in Montenegro pushes them back into 3rd place in the group and out of the automatic qualification spaces.

But even in defeat, it was the Kosovo fans who applauded their team off the field more vociferously. At 2 goals this was England’s smallest margin of victory yet in Group A, and Kosovo know that matches against Czech Republic in Prague in November and Montenegro in Prishtina next month will be more important for sealing qualification to Euro 2020.

Man of the match Sterling praised his opponents after the match, telling those left in the stadium after the final whistle that Kosovo “came to fight.”

Challandes also expressed pride in his players for their spirit after trailing 5-1 at half time, jokingly asking who the last team to beat England 2-0 in a single half was. He also promised that, regardless of the circumstances surrounding Kosovo’s final group game with England in Prishtina in November, there would be no change of philosophy. Kosovo would continue to attack.