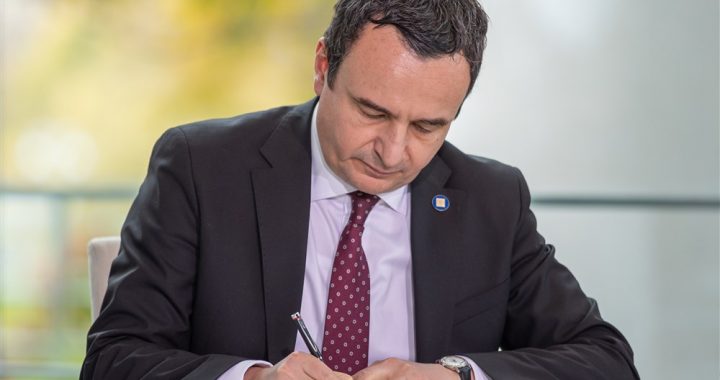 Kosovo Prime Minister Albin Kurti postponed the imposition of fines on drivers using prohibited Serbian-issued licence plates after a meeting with the Serbian president in Brussels failed to deliver a solution to the ongoing crisis.

Kosovo Prime Minister Albin Kurti on Monday evening agreed to postpone the imposition of fines for Serbian-issued Kosovo licence plates for 48 hours after a request from the US ambassador to Pristina, Jeff Hovenier.

“I thank Ambassador Hovenier for his commitment and engagement. I accept his request for a 48-hour postponement on imposition of fines for illegal ‘KM’ (and other) car plates. I am happy to work with the US and the EU to find a solution during the next two days,” Kurti wrote on Twitter.

Hovenier requested a postponement after a meeting between Kurti and Serbian President Aleksandar Vucic in Brussels on Monday failed to produce a solution to the long-running crisis over the licence plates.

Hovenier said that “the United States is concerned that the leaders of Kosovo and Serbia were unable to reach an agreement today on a solution to the current crisis in Kosovo”.

The postponement will allow “the EU and the United States to further engage the parties to find a solution”, he added.

The head of the Serbian government’s office for Kosovo Petar Petkovic said on Tuesday morning that Serbian President Vucic was “ready for compromise solutions”.

He blamed Kurti for the failure of the discussions, saying that the Kosovo premier only talked about “how he is exclusively interested in some kind of full normalisation of relations, as he said, which has mutual recognition as the centre of such an agreement”.

After returning from Brussels on Monday, Vucic said that Serbia was willing to stop issuing plates for Koosvo with the prefix ‘KM’, and would accept ‘status-neutral’ plated with the prefix ‘KS’, as were previously issued by the UN’s mission UNMIK when it was in charge of administering Kosovo.

“We do not need to have KM plates, it is sufficient to have status-neutral KS plates,” Vucic told media.

“However, the other side reacted very negatively to that, saying that UNMIK is in Kosovo’s distant past,” he added.

On Monday, EU foreign policy chief Josep Borrell said that Serbia had accepted an EU proposal to stop issuing licence plates for Serbs living in northern Kosovo but Kosovo did not agree to halt the process of re-registering vehicles with Serbian-issued licence plates which has sparked tensions in Serb-dominated northern Kosovo.

Borrell said that “there is an important responsibility [on both sides] for the failure of the talks today and for any escalation and violence that may take over on the ground in the following days”.

Kurti claimed on Monday meanwhile that Borrell was “giving up on the March 2023 deadline” in a EU proposal for a final agreement on the normalisation of relations between Kosovo and Serbia.

“Every allegation that the EU is giving up on its proposal on normalisation of relation between Kosovo and Serbia, which is supported by Germany, France and the US, is not true,” Stano said.

“The EU continues to fully support this proposal and encourages parties to agree on the text once they are ready to prove to the international community that they are ready to move towards a European solution,” he added.

“What we saw today from Mr. Borrell was blatantly biased, accommodating the aggressor and presenting a completely distorted reality. If Borrell respected the basic principles of neutrality, he would mention to Serbia at least some of the Brussels agreements that have been violated, instead of accusing Kosovo,” Osmani wrote on Facebook.

“Peace and stability cannot be achieved by accommodating those with hegemonic ambitions. But Kosovo will never give up the clear goal of long-term peace and stability as well as law and order throughout its territory,” she added.

The international community expressed concern and disappointment on Monday’s lack of agreement.

A US State Department spokesperson expressed concern about the lack of any agreement on Monday and urged Kurti to work with Borrell and the EU’s special representative for Kosovo-Serbia dialogue, Miroslav Lajcak, to reach a fair compromise.

“Both parties must refrain from undertaking any provocative steps, meet their obligations from the EU-facilitated dialogue and engage constructively in reaching a sustainable solution. The United States calls on Kosovo and Serbia to undertake immediate steps to reduce the tensions,” the spokesperson told Klan Kosova.

NATO Secretary-General Jens Stoltenberg said on Twitter that “we are disappointed that it was not possible to solve the licence plate dispute. Now is the time for responsibility and pragmatic solutions. Escalation must be avoided.”

The head of UNMIK, Caroline Ziadeh, also said that it is necessary “to avoid any escalation that could destabilise the situation on the ground, lead to unintended consequences and jeopardise the hard-won gains of the last decade.”

“We only asked them to be careful, to be calm, to preserve peace and stability, to respond to other people’s arrogance in the way decent people always respond,” Vucic said in a video on Instagram.