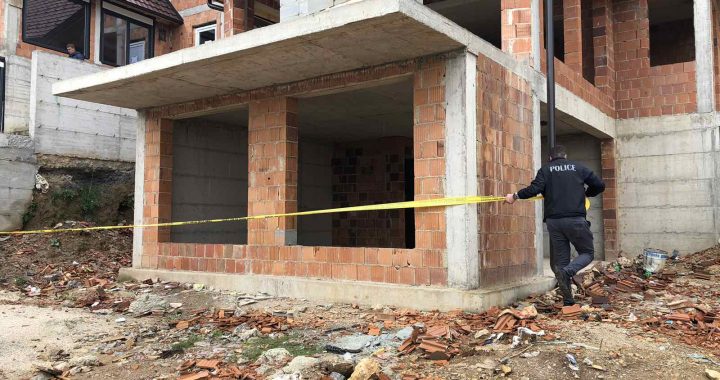 A Kosovo Police officer during the operation in Brezovica on Tuesday. Photo: BIRN

Kosovo police and prosecutors seized around 100 villas and other buildings in the mountain resort of Brezovica- the latest in a series of operations targeting illegal constructions and allegedly corrupt officials.

Kosovo police and prosecutors seized around 100 villas and other buildings in the mountain resort of Brezovica in the latest in a series of operations targeting illegal constructions and allegedly corrupt officials.

Around 100 buildings, including more than 80 villas, were taped off by police accompanied by Ferizaj/Urosevac prosecutor Rasim Maloku.

“The operation is going well. We are carrying out an identification of the villas and putting up warnings that access to them is now prohibited until a final verdict from the court,” Maloku said.

In December last year, the former mayor of the Shterpce/Strpce municipality, Bratislav Nikolic, municipal directors and heads of private companies were arrested in another raid over alleged illegal construction at the mountain resort.

In total, around 30 people have been arrested in operations related the case so far.

Maloku said he expects more charges to be raised.

“We are drafting a second indictment. I believe we will have even a third indictment by the end of the year. The investigation will continue in 2023 as well because it is a big case and we could not include everything in a single indictment,” he added.

Maloku explained that the law governing the Sharr Mountains National Park “explicitly prohibits construction of those buildings in this zone”.

In a press release on Tuesday, the Ferizaj/Urosevac Basic Prosecution said it believes that around 100 buildings have been constructed in violation of the law.

It said that their construction was enabled by abuse of public office, the issuance of construction permits in violation of the laws that regulate the national park, and the giving and receiving of bribes.

“[Through those actions] they have degraded the environment in this zone,” the prosecution said.

In the period since the Kosovo war, many villas have been built in Brezovica, some of which allegedly belong to political figures and other public officials, and some of which have unclear ownership.

BIRN has learned that villas belonging to politicians could be the target of the prosecution’s investigations in this case.