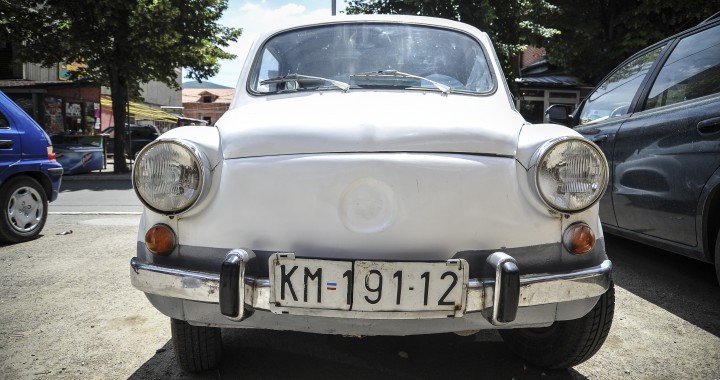 An agreement signed on September 14 will eliminate the need for drivers of Kosovo-registered cars to purchase temporary “proba” plates when traveling in Serbia.

Earlier this month, Tahiri and Marko Djuric, Serbia’s Chief Negotiator for the Dialogue, agreed to use stickers to cover license plates of cars coming from Serbia to Kosovo and vice versa. This agreement on the new sticker regime aims to finalize the Brussels-mediated agreement on freedom of movement between the two states.

In 2011, EU-facilitated negotiations between Kosovo and Serbia opened talks meant to ensure the ability of Kosovo and Serbia residents to travel freely “within or through the territory of the other.” An agreement in July of that year provided for a system of ID card and entry/exit documents. It did not address the cumbersome issue of mutual recognition of automobile insurance, which was not solved until 2015. Nor did it come up with a solution for the prickly issue of license plates.

Until Kosovo and Serbia reached the 2015 agreement on mutual insurance recognition, Kosovo plated travelers had to pay hefty fines for temporary car insurance when entering Serbia. After 12 August 2015, drivers no longer had to buy additional insurance. However, this agreement made no mention of license plates. Travelers to Serbia with Kosovo plates still needed to purchase a temporary “proba” license plate for five euros per day of travel in order to enter Serbia. Though the implementation of the agreement on freedom of movement has been a bureaucratic roller-coaster ride, by Spring of 2016, Prishtina Insight was able to cross the Kosovo-Serbia border by purchasing two months’ use of the paper registration plates for five euros.

The license plate agreement reached on 14 September says that the parties will cease the use of “proba” temporary plates by 15 November 2016. Instead, vehicles will enter Kosovo from Serbia and vice versa with “relevant parts of the respective license plates” covered by white stickers.

Though the Minister’s office did not specify which parts exactly will be covered by the white stickers, the agreement to cover parts of Serbian and Kosovo plates is being lauded as an achievement of reciprocity.

“The relevant parts are covered with stickers – this is reciprocal. [The solution is] similar to the model between Macedonia and Greece, although Greece implements this unilaterally.”

Tahiri was referring to the Greek border service’s use of stickers to cover the letters “MK” on Macedonian plates since 2012.

Through the license plate agreement, Kosovo hopes to gradually eliminate the registration of cars in Kosovo without ‘RKS’ (Republic of Kosovo) license plates. Before Kosovo declared independence in 2008, the United Nations Mission in Kosovo, UNMIK, issued ‘KS’ plates, which, without the ‘R,’ are considered to be status-neutral. In Serb-majority municipalities, it is common to see Serbian-issued plates, and particularly in northern Kosovo, old Yugoslav plates including city initials (i.e. KM for Kosovska Mitrovica).

Minister Tahiri accepts that ridding Kosovo’s streets of pre-independence plates will take several years, which is why the agreement foresees five years for ‘KS’ plates to be phased out and entirely eliminated.

“The extension of the KS car plates for another five years is to create a climate of integration of the northern Serbs, so they gradually remove all illegal car plates. With this dialogue we are including Kosovo Serbs in the Kosovo system.”

However, the agreement gives twelve months to eliminate the plates issued by the Serbian government with the initials of the regions in Serbian, and these plates will not be covered under the white sticker agreement because Kosovo considers them to be completely illegal.

“This agreement does not affect cars with illegal plates. These will not be covered, because if you do that you legitimize them,” Tahiri said.

In November, civil registry offices are set to open in the four northern Serb-majority municipalities to issue registration documents.