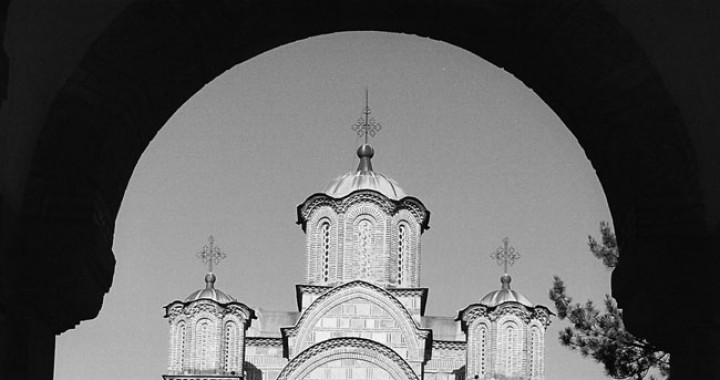 Photo by Dozetdarko. Used under a CC license.

One thing is certain: it is March, a month when Albanians are known to fall for a lot of traps.

On March 17, 2004, a systematic unrest erupted in different parts of Kosovo, with most of the fury being targeted at ethnic minorities. Through an orgy of violence unseen since the end of the war in 1999, the protests made Kosovo a topic in international media again, but this time roles had been swapped: the victims were the minorities (Serb civilians), and the bad guys were Albanians. A tragedy not fully understood caused the initial protests: the drowning of two Albanian children in Mitrovica and the haphazard and unprofessional accusation of Serbs by the RTK. This gave rise to crowds led by members of secret party services, especially the PDK, in order to spread chaos. None of the political leaders of the time, including Ibrahim Rugova, adequately handled their duty and public responsibility. Defending minorities in 2004? Better not, because ‘liberation’ mobs and their media would brand you a ‘spy for Belgrade.’

In the future, further details will be uncovered about the 2004 unrest, especially regarding the publication of the reports by NATO and the UN. Even now, 12 years after the unrest, there is enough evidence that support the speculation that essentially everything was staged and that it was not a revolt by the Albanians. According to a human rights activist from Belgrade – who is rather popular in Kosovo – Serbian secret services in agreement with Kosovo Albanian secret party services staged the events of the March 17, 2004 as a last endeavor to divide Kosovo. Causing 19 deaths (mostly of Albanians), forcing hundreds of Serbs to flee, burning tens of houses and Serb Orthodox churches, they heavily damaged Kosovo’s image in the West.

While using easily manipulated, power-hungry Albanians, Serbia achieved two strategic goals: launched the narrative that Albanians are just as criminal as the Serbian forces that slaughtered Albanian civilians in 1998-99 to the west. Furthermore, Belgrade managed to convince the international community that every potential solution to Kosovo’s status would have to take into account an active internal role played by Serbia in Kosovo in order to protect the local Serbian minority and safeguard their cultural and religious heritage.

Today, media outlets that are close to Hashim Thaci’s regime claim that the 2004 unrest was a “people’s revolt” after which the international community was bound to solve Kosovo’s issue. In fact it was, yet only with partial results, a crippled independence, multiple traps within the political system, things which have created a country with massive defects regarding functionality.

For example, Kai Eide’s report proposed a solution to Kosovo’s status, yet it was centered around the Serbian narrative and not the fact that Kosovo is, above all, an issue of the Albanian majority. This is what Kai Eide writes in his report: “After 1999, Kosovo Serbs experienced a gradual shift of the instruments of power to Provisional Institutions of Self-Government dominated by the majority. This dramatic change has had a psychological and political effect on majority and minority communities. (…) Now, Kosovo Albanians display a great deal of confidence and tenacity. They will undoubtedly form their identity as a majority that holds power. For the most part, this identity has been built on controversial events, individuals and symbols often in dispute with the identity of Kosovo Serbs and other communities. (…) Kosovo Serbs have difficulties retaining their identity. They are faced with pressure against important elements of their identity, such as language, culture, cultural heritage and economic survival.”

The statements in Kai Eide’s Report are extremely problematic and it seems that they went unnoticed by Kosovo politicians at the time. Or maybe they didn’t understand them at all. Albanians as a majority are displayed as a people who are building an identity on controversial events and this identity poses a threat to Kosovo Serbs who, according to the Norwegian diplomat, do have an identity but find it difficult to maintain it.

Hashim Thaci called Kai Eide’s Report “real and acceptable” for his party, the PDK. A spokesman of Ramush Haradinaj’s Alliance for the Future of Kosovo (AAK) party declared that Eide’s Report is “very real and will accelerate the process for the commencement of talks to determine the final status of Kosovo.” A spokesman of Ibrahim Rugova underlined that “he expected the report to pave to way to the solution of the issue of Kosovo’s status, and this has happened and is important.”

This means that neither the heads of LDK nor those of PDK and AAK insisted on the quality of the process, but were pleased with the commencement of the talks for Kosovo’s status. With only a few forthright exceptions, the Kosovo delegation which negotiated for the status comprised of dilettantes who, while in Vienna, spent more time in hotels and bars instead of carefully reading the documents presented by Martti Ahtisaari’s team, informed from Kai Eide’s report.

Kosovo proved itself weak in the negotiation process because they “had to” accept infinite concessions regarding the autonomy of the Serb minority instead of fighting for the rights of the Albanian majority. This was a direct consequence of the 2004 events: they caused the international community to lose a great deal of trust that they had for Kosovo Albanians. Immediately after the war, international troops sometimes turned a blind eye when a minority person was abused by Albanians, whereas after 2004 practically no western chancellery believed that a country led by Albanians would allow the latter to adequately treat ethnic minorities. Consequently, Ahtisaari’s Plan includes tens of safety switches, pillars and rules just to guarantee the rights of the Serbian minority.

To say that “the people’s revolt” led by the PDK paved the way to the solution for Kosovo’s issue is not only political blindness, it is a public insult and a deliberate avoidance of the facts, especially considering that before 2004 Thaci and his party came up with a moratorium about reaching a solution to Kosovo’s status, which in reality was a proposal for postponing independence. How is it possible for people who requested postponing the commencement of the talks for the political and legal future of Kosovo accelerate solving Kosovo’s status?

Kosovo is still suffering from the consequences of the stupidity of March 17, 2014. The fact that official vehicles are being set on fire exactly on  March 17, 2016 shows that we’ve learned nothing from the 2004 unrest. These incinerations are either being carried out by Serbia through its secret structures – which would prove that Kosovo does not have a full-blown security system, but only a police which is instrumentalized for political goals, or they are committed by self-acclaimed patriots who try to attain power through chaos. Either that, or parapolitical structures linked to the current government want to ruin Kosovo once again to escape the Special Court. One thing is certain: it is March, a month when Albanians are known to fall for a lot of traps.