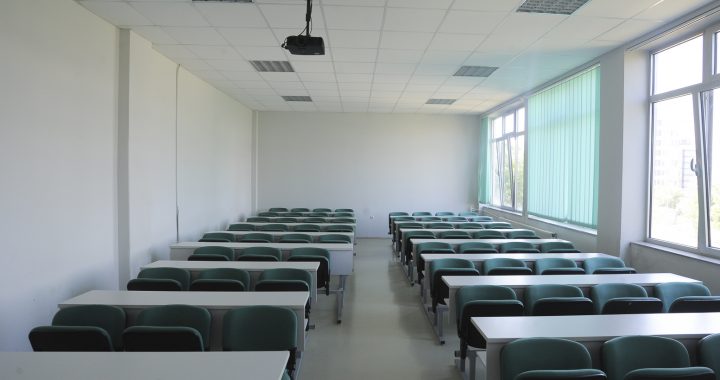 A classroom at UP. | Photo: Atdhe Mulla.

Kosovo’s Ministry of Education said it is investigating after a teacher took a selfie with his students allegedly saluting Turkish President Recep Tayyip Erdogan’s military campaign in Syria.

The Ministry of Education said on Tuesday that it is looking into the incident at a school in Prizren after the photo taken of the teacher and pupils holding a Turkish flag and saluting – an alleged tribute to the Turkish troops currently engaged in military action in Syria – went viral on social networks in Kosovo.

The teacher, Selver Shantir, and the school’s director did not respond to BIRN’s requests for a comment, but KTV television made public the teacher’s written statement to the Inspectorate of Education, in which he claimed that the photograph was requested by the schoolchildren themselves.

He also said it was not a tribute to Turkey’s military campaign strikes in Syria, but connected to a salute by Turkish footballers after their national team scored a goal against Albania in a Euro 2020 qualifying match earlier this month. Prizren is home to a strong Turkish community.

“After experiencing the qualification of Turkey’s national team in Euro 2020, my schoolchildren asked me to make the same gesture as the players did when they won their match [against Albania],” Shantir said.

“But my photograph was used by some malicious people who linked the photograph with the events in Prishtina, but it has nothing to do with it,” he added, referring to a protest against Turkish air strikes in Syria organised by a group of Kosovo women on Saturday.

The Turkish team’s salute was a salute to the country’s troops fighting in Syria, and European football governing body UEFA has said it will investigate it because political gestures are not allowed on the pitch.

Shantir insisted that he had no intention of causing any offence with the photo, which was reportedly taken on October 13.

“I never had the intention to humiliate or offend anyone on any national, religious or racial grounds,” he said.

The Ministry of Education said that its inspectors will gather information about the incident.

“Schools are not spaces for the application of any ideology and abusing this with children is in contradiction with international conventions and Kosovo’s laws,” the ministry said in a written statement.

“It will be investigated in accordance with the law and we are coordinating with the Inspectorate of Education,” Thaci-Vezgishi said.