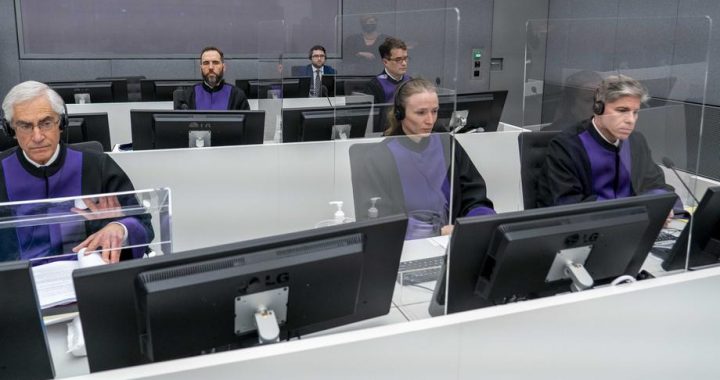 Courtroom of the Kosovo Tribunal in the Hague, the Netherlands, 09 November 2020. EPA-EFE/JERRY LAMPEN

Head of Specialist Chambers Ekaterina Trendafilova said on Wednesday that she expects the trial of four former KLA chiefs to start late this year or early in 2023.

In a rare media appearance, the head of Kosovo’s Specialist Chambers in the Hague, Ekaterina Trendafilova, set the end of this year or the start of 2023 as a possible date for the start of the wr crimes trial of former Kosovo Liberation Army leaders Hashim Thaci, Kadri Veseli, Jakup Krasniqi and Rexhep Selimi.

“It is my prediction, seeing the file of this case, that the trial will start by the end of this year or in the first days of 2023,” Trendafilova said.

The “outreach” event was first planed to be held in Kosovo, in the eastern town of Gjilan/Gnjilane, but it went online after Kosovo’s non-parliamentary Social Democrat Party supported by war veterans’ associations announced likely protests.

“Kosovo people have a right to protest but I have to stress that I do not discuss politics because I am not a politician,” Trendafilova said, commenting on the protest threat.

Under arrest since November 2000, ex Kosovo president Thaci and his three co-defendants, including former parliament speakers Veseli and Krasniqi as well as MP Selimi, are accused of war crimes and crimes against humanity, including illegal detentions, torture, murder, enforced disappearances and persecution from at least March 1998 to September 1999 during the time they were commanding the guerrilla army.

The Specialist Chambers are formally part of Kosovo’s judicial system but are ocated in the Netherlands and staffed by internationals.

They were set up under pressure from Kosovo’s Western allies, who said Kosovo’s justice system was not robust enough to try KLA cases and protect witnesses from interference.

But the so-called special court is widely resented by Kosovo Albanians who see it as an insult to the late-1990s war for liberation from Serbian rule.