Researcher Janet Reineck has written a memoir of her life in Kosovo in the 1980s and 1990s – a world that she says has vanished with such bewildering speed as to pose important questions about the future of Kosovo’s identity.

Janet Reineck, 68, knows the rural areas of Kosovo like the back of her hand. In the 1980s, she came to work as an anthropologist in Kosovo, but also became very close to families in different parts of the country.

She became a reason why many women attended health courses for the first time and saw what emancipation of women meant. She also helped many children learn English.

At that time, Kosovo was an unknown place for the 26-year-old. In 1980, in Zagreb, Croatia, she first heard Albanian music, which became an inspiration for her to study  the rural areas of Kosovo for her Master’s thesis and doctoral thesis and then, in the 1990s, to run humanitarian aid projects. 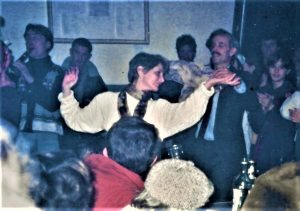 Staying with Albanian families in Prishtina, Viti, Has, Gollak, Opojë and Rugovë between 1981 and 1997, then returning for humanitarian aid, made Reineck, in addition to learning Albanian customs and traditions, change her worldview.

In order to keep in the collective memory this way of life of a people that had been occupied for centuries, and which after freedom is in danger of losing some of its unique values, Reineck in August published in Albanian a memoir An American Woman in Kosova. The book contains travelogs and photographs of the researcher’s life in Kosovo. 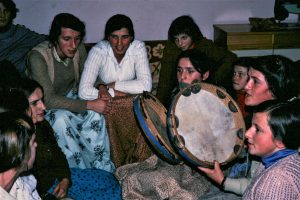 Dancing with the village girls

Over the years that Janet stayed in Kosovo for scientific research, she lived in extended traditional families, danced with village girls, ate flia with her right hand sitting on sofra (table), sat cross-legged in oda (men’s rooms), slept on shilte (pad), kept the secrets of the village girls and sang at traditional weddings.

A lot of people called her Xheneta, a name in Albanian that sounds similar to Janet. Initially, Reineck came to Kosovo to conduct research for a Masters in Dance Ethnology at the University of California, Los Angeles, focused on the dances and customs of rural Kosovo, including Has, Rugova and Gollaku, with a focus on Opoja’s rich song tradition and its women’s dances and cycle of 11 men’s dances, Kellçoja. 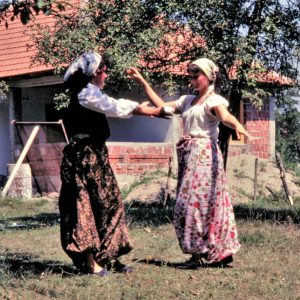 In one form or another, Reineck in Kosovo was a figure of emancipation for Albanian families. As a 26-year-old, as an inexperienced anthropologist in a land occupied by Yugoslavia, she was not aware of what it was like to live so limited by the enemy and by social rules, especially when you are a woman.

Considering the political situation and social rules, she says the process of understanding the life of Albanian women was very slow.

“At that time in Kosovo, I encountered a very strict assignment, that girls and women live in this way, and men in another way. On the one hand, it seemed beautiful to me, but slowly I understood what difficulties Albanian women were going through,”  she says.

Over the years, she understood what it meant to be a bride in Kosovo – a life that looked beautiful from the outside, with rituals all around, but on the inside she saw that the bride’s life depended on how she spent her time with husband’s family and the whole extended family.

“This life can be beautiful for the new bride because she always has company, she is never lonely, and is always in the company of other brides and other women. But the bride is coming to a foreign door, without anyone from her own family. Young girls know from the time they are born that they will have to accept their fate,” she says.

After winning a scholarship to study in Kosovo, in the mid-1980s, she returned. But unlike the previous time, she now had a car to travel around more easily in Kosovo’s remote areas, unlike the first time, when she traveled by bus.

Meanwhile, the doctoral thesis in Anthropology at the University of California at Berkeley was focused on gender migration and the ideology of Albanians over the years. Later in the 1990s, Reineck returned to Kosovo to run humanitarian aid projects for Oxfam and the International Rescue Committee.

Unlike in the US, in Kosovo she encountered a completely different world, where genders had very defined roles in society. When Janet drove her car for studies from one village to the next, the women of the villages were amazed.

“When I got the car it was a big change, because I was freer to move around and I had the opportunity to move into the villages. I took the women who were walking through Opoja by car, because they had never been in a car before, nor a woman driving. It was very interesting,” she says.

Then, in the 1990s, even though the political situation had become politically tense, Reineck came back to Kosovo to run humanitarian aid projects.

Reineck took her four-year-old son with her. She was only allowed by the Yugoslav authorities to improve the sanitary conditions in primary schools in Vitia country.Other missions were strictly prohibited. But, despite the bans, along with other activists, she renovated schools and founded a women’s NGO.

“We gathered women in the villages to attend health courses every two weeks. We did all these things without Serbia’s permission. Then we started  [advocating] also in families when we found out that the girls were not going to high school. There was a lot of risk, but in the end there was a lot of success; we worked hard at that time,” she says. 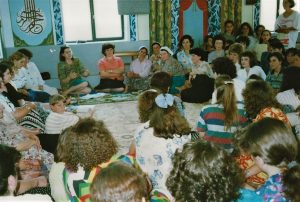 Suffering of Albanians changed her worldview

Reineck says that living with Albanians changed her perception of life, and that she now feels constantly committed to helping the poor. Besides the music, the things that most impressed this young American in a foreign country were the warmth between people, the hospitality, and lifestyle.

“Among the people in the 1980s but also in the 1990s, when I came for humanitarian aid, I saw a lot of personal and family suffering that I’d never experienced before. That situation opened my eyes that people in other countries of the world suffer a lot, and we should be very thankful that we can live, with good health and can also do something for this world,”  she told Prishtina Insight. 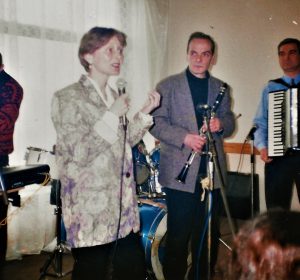 After leaving Kosovo, Reineck has been back to Kosovo only in 2002 and in 2022, but she has not forgotten the Albanian language and her connections with Kosovo. She still speaks the north-Albanian dialect very well.

In other countries of the Balkans, she says she saw people enjoying themselves with alcohol at parties, while in Kosovo she noted people could celebrate while keeping control of themselves, and creating a fun atmosphere with only a tambourine.

“I liked the melody, the rhythm, the melodiousness of Albanian music. I know Balkan music well. But something more interesting in Kosovo, more beautiful, is also the singing of girls with tambourine, which is very lively and beautiful. At that time, Albanians didn’t need any radios, only tambourines for singing and dancing. In any case, they had the chance to organize parties with only a tambourine,” says Reineck, a story she shared in her book. 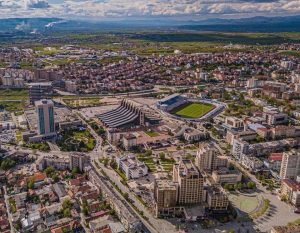 Courtesy of Municipality of Prishtina.

A country that is liberated but also alienated

After 20 years, when she came back to Kosovo, she saw a country transformed from the one she had seen last time. There have been so many changes since her doctoral thesis in the 1980s, “The Past as Refuge: Gender Migration, and Ideology Among the Kosova Albanians”.

Studies and comparisons with other countries that have undergone similar changes should be made, to look at what happends to societies after gaining freedom.

For her thesis, the anthropologist looked at the factors behind migration from rural areas like Opoja, but now she saw a Kosovo almost emptied of young people who are migrating abroad even though they are free.

Reineck is surprised at how quickly gender roles have changed, families have shrunk, cities have been filled with buildings and many businesses have opened.

“Kosovo has completely changed, except for with the hospitality, where not a single grimë  [bit] has changed. There are other societies that are proud of their hospitality, but it is very interesting and it is a great symbol that, despite everything Albanians have experienced, the hospitality has not changed a single bit,” she considers.

Reineck was surprised also to see so many magnificent houses built by the diaspora, who come only during the summer to live in them. The large number of young people who have migrated will never return to Kosovo, she fears. Such a transformation of society is “scaring” her, lest the identity of Albanians disappear.

“Why is such a large investment needed when families only come to visit Kosovo in the summer? I do not believe that the youth will return to live in Kosovo, at least not the majority. This social problem is very complicated. They all want to leave Kosovo, they all want to go, they are all going, but what happens to Kosovo then?” asks Reineck, calling for a public debate on the matter.

About the rituals and customs that she wrote in the thesis, she says that almost all of them have disappeared. She says this rapid transformation raises many existential questions about a future that is so different from the past.

“There are many other things in life that are more important for existence. But it is an existential moment: what does it mean to be Albanian, who is your identity and what is the importance of this? If you want to live like in the Western world, what do you want to keep as a symbol of your strong identity?” she asks.

Who will take care of the parents if the youth all go abroad and a child does not stay with parents? Who will stay in Kosovo? Will girls or boys take care of their elderly parents? Should constructions be rationalized or are people enjoying them? What does marriage mean now? The researcher considers these questions posed for Albanians to be existential for the future of individuals, families and the entire country.

According to her, the main factor that may have influenced this alienation is the euphoria of freedom after so many years of occupation by Serbia, a claim which she thinks that deep studies should be done about.

“Albanians have developed very quickly, what energy, what enthusiasm from euphoria, knowledge and skill. They are able to get accommodated very quickly in a foreign country,” says Reineck.

Shnosh is the word that has remained in her mind of life in Kosovo. In this word, she sees a deep philosophy of how to weave many things that give hope into a single word, which is used for both sadness and joy.