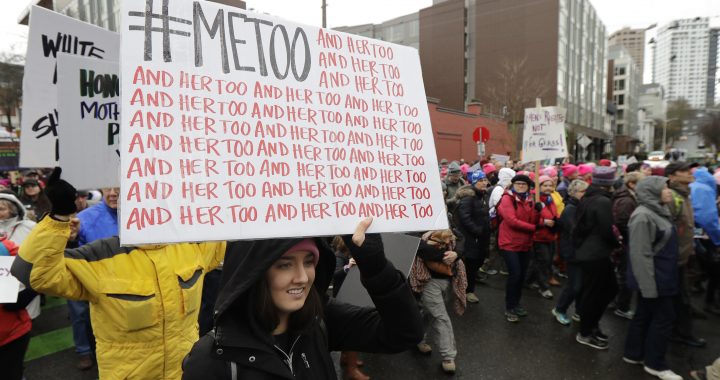 A marcher carries a sign with the popular Twitter hashtag #MeToo used by people speaking out against sexual harassment as she takes part in a Women's March in Seattle, Saturday, Jan. 20, 2018. | Photo: Beta, AP Photo/Ted S. Warren.

Is this Kosovo’s #MeToo moment?

I hope the response to Albin Kurti's comments on sexism in Vetevendosje is part of a new wave of anger. The time for panel discussions and reports is over - it’s time for rage accompanied with action.

It seems almost too good to be true: a political platform in Kosovo that prioritizes gender equality and toes a tough line against sexual harassment. Albin Kurti’s platform for opposition party Vetevendosje laid out calls for reform that are historical firsts in Kosovo: disciplinary committees for sexual harassment, mentors for young women in the party, gender equity in the party’s hiring practices, and a review of the party’s statute from a feminist perspective. Then another historical first occurred during BIRN’s Thursday night interview  with Kurti: when asked about the prioritization of gender equality in the new platform, he admitted the platform emerged as a response to complaints of sexual harassment within the party. He also stated that women had left the party as a result.

Resigning from the party on Thursday, Teuta Rrusta, the former coordinator for Vetevendosje centers, accused Kurti of instrumentalizing the issue of gender equality for political gain (Kurti has just been elected party leader amid a barrage of resignations of former leading figures in the party). She called upon Kurti to address sexual harassment “with concrete names,” adding that “it’s very problematic to just throw a topic like this into the air. I have a problem in that if there were these sorts of criticisms, he didn’t mention them earlier but is bringing them up now. I have every reason to think that he’s using women’s issues for political aims. This is unacceptable.”

Nazlie Bala, the Head of the Women’s Secretariat of Vetevendosje, responded by saying that women within the party raised the issue of sexual harassment as well as other forms of gender-based violence (according to Tinka Kurti, women within the party pushed gender equality into the party platform). Bala said that naming perpetrators should only be done by victims, whom she described as “courageous” for voicing their complaints to the party.

The turmoil caused by Kurti’s admission of sexual harassment within the party is unprecedented in the recent political history of Kosovo. Rumours abound of public figures from across the political spectrum treating women like dirt, from domestic violence to extortion of students for sexual favors.  I’ve heard stories from young women working and volunteering in political parties that have made my skin crawl. They almost never speak out, because the cost is too high: how will you get a judge to hear your case if there’s a chance he or she might think you were asking to have your ass and chest groped – that you must have wanted nothing less than being treated like a piece of meat at your place of work?

Excuse my abrasive language, but this is at the core of what we affectionately call “teasing” in Albanian: reducing the thinking and breathing human being in front of you to ass, tits and holes. There tend to be no consequences for this behavior, because honor in this traditional society is rooted in the power you have to humiliate and denigrate others.

This is why both the women in Vetevendosje and those who left it because of sexual harassment deserve our respect: they are demanding an end to a form of violence we take for granted like the air we breathe. By demanding accountability, they are giving a voice to all the women whose professional and domestic lives are peppered with daily doses of humiliation.

Please don’t think that just because women in Kosovo in 2018 wear jeans and smoke that sexism is our collective hysteria. As a reminder, two weeks ago women across the country were kicked out of domestic violence shelters because the government failed to fund them. They were, quite literally, on the streets. Diana Kastrati’s murderer and former husband Adnan Jashari is a free man who never saw a day in prison. Nebih Berisha’s sentence for stabbing his wife Zejnepe Bytyqi to death was increased only after the Kosovo Women’s Network paid for a lawyer to appeal it. MPs have had the x-rays of their pelvis broadcast all over national media. Even after all the uproar that occurred in 2014 and 2015, I’m told that Vesel Latifi’s textbook on criminology is still in use by law students at the University of Prishtina – this is the book that called victims of sexual assault “psychopathically sick” and “loose.” Hundreds of women in this country were raped and remain silent because of their menfolk, who couldn’t protect them from soldiers or paramilitary fighters in 1999 and demand their obedience today.

On the lower end of our spectrum of hatred for women are all the other ‘lower level’ offenses, like ‘jokes’ about pubic hair or the lack thereof, the ‘flirting’ that happens when you grab someone against their will, the ‘arrangement’ of giving someone a livelihood in exchange for access to their body. What the women of Vetevendosje rightly call out is a widespread societal attitude, one that makes us teach girls how to protect themselves from the actions of men (and the women who act in complicity with them) the second they hit puberty by laughing along and getting along.

Sexual harassment and rape are not two categorical ideas but exist along an entire spectrum of abuses.  When a girl is told to just “ignore” the men who say things to her that reduce her to tits and ass, she’s also being taught that she should tolerate being treated like tits and ass. But Hana, where’s the proof that this is such a widespread, structural problem? Here’s my answer: it doesn’t seem to matter that there’s an entire body of research that quantifies the gender inequality in Kosovo, judging by the monumental denial and projection that occurs every time a woman tells the truth about how she has been harmed. That’s why I won’t get into statistics and numbers here. If you really care to know how prevalent the problem is, here’s your reading list.

I hope that this is part of a new wave of anger. The time for panel discussions and reports is  over – it’s time for rage accompanied with action. Vetevendosje has the opportunity to be the party that cleaned house, and I hope they take it. But it is so much bigger than them. It’s a first that a leader of any organization or institution in Kosovo admits to sexual harassment as an issue to be dealt with; nay, it’s a first that women inside an organization have managed to make this a top priority in their place of work. This is unprecedented in a country where for days men defended ‘flirting’ and ‘teasing’ — read: catcalling —  after women pointed out all the abuse they go through just by walking out of their house during a #TakeBacktheNight social media campaign in 2014.

Unfortunately, we do not have glitzy Hollywood stars to lead us into a new age by naming and shaming perpetrators. It will take more than an interview to change the victim-blaming culture deeply entrenched in our particular form of patriarchalism. But by pointing out the obvious, or rather the structural that does not begin or end with his party, Kurti gave us all something we direly needed – acknowledgment. And we can work with that.