Gated communities offering expensive, luxury housing have begun to appear across Kosovo in recent years, with critics arguing it is a sign of growing social inequality.

Leart* can still remember his father’s astonishment when he told him he was planning to leave his apartment in central Prishtina and buy a house on a forgotten piece of land somewhere 10 kilometers southwest of the capital.

However, eight years later, the site that was then covered in mud is now Marigona Residence, one of Kosovo’s most modern neighbourhoods with over 430 houses. “Today I’m a bit sad that I wasn’t wise enough to go into debt and buy another home here,” Leart says.

Leart and his family were not the only ones who had doubts. Erolld Belegu and his partners, who initiated the construction of Marigona Residence in 2008, faced scepticism from others about the location because of its distance from the capital. “For many [the site] was far away, but we had to offer people something you couldn’t find in the Kosovo housing market,” Belegu recalls.

Now, former Prime Minister Ramush Haradinaj and his brothers, as well as government ministers, foreign diplomats, businessmen, and celebrities all have houses in the neighbourhood. The main requirement for living in Marigona is wealth, with homes costing between 200 and 500 thousand euros. 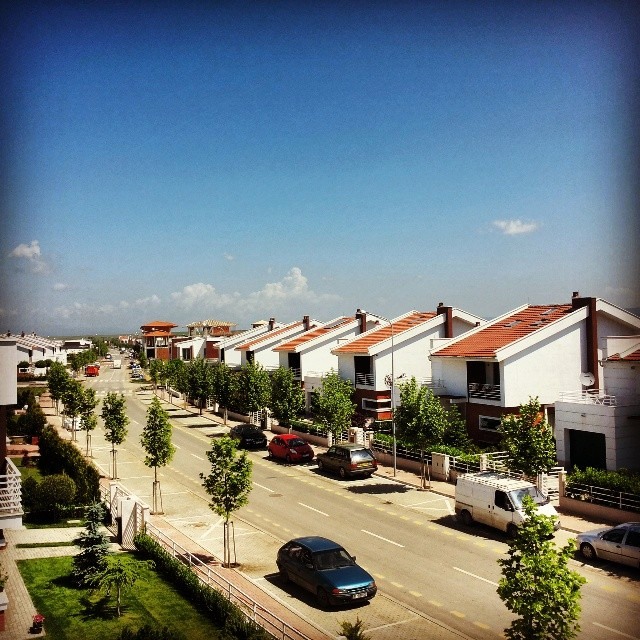 The neighbourhood is completely self-contained, with schools, kindergartens, supermarkets, restaurants, sports facilities, clothes shops and even a dry cleaners all on site. As Leart says, one can stay in this neighbourhood for weeks without having to leave.

The neighbourhood is only accessible through two entrances, both of which are guarded by an electronic barrier operated by a security guard. Leart tells Prishtina Insight that the security Marigona provides is one of the main reasons that he could never return to life in the city centre.

“We are not here for most of the time during the summer, but we can leave the door of the house open, and you can’t do that anywhere,” he says. “We leave the children’s bicycles in the yard, and often we leave the car unlocked. For those of us who live here, we feel a kind of security.”

Belegu reveals that inspiration for Marigona’s design came from neighbourhood models in the US that he discovered on business trips, and many streets are named after American states: California, Texas, Florida, Colorado, Washington.

While Marigona may be the most renowned of Kosovo’s exclusive, self-contained neighbourhoods, it is far from the only one – many gated communities have been built across the country over the last decade.

However, the phenomenon is not restricted to the capital and its outskirts. The Municipalities of Ferizaj and Gjilan revealed that there are two gated communities in each of the respective regions, while Prishtina Insight also discovered evidence of a number of projects in development, including a neighbourhood with over 400 houses planned on the outskirts of Ferizaj. 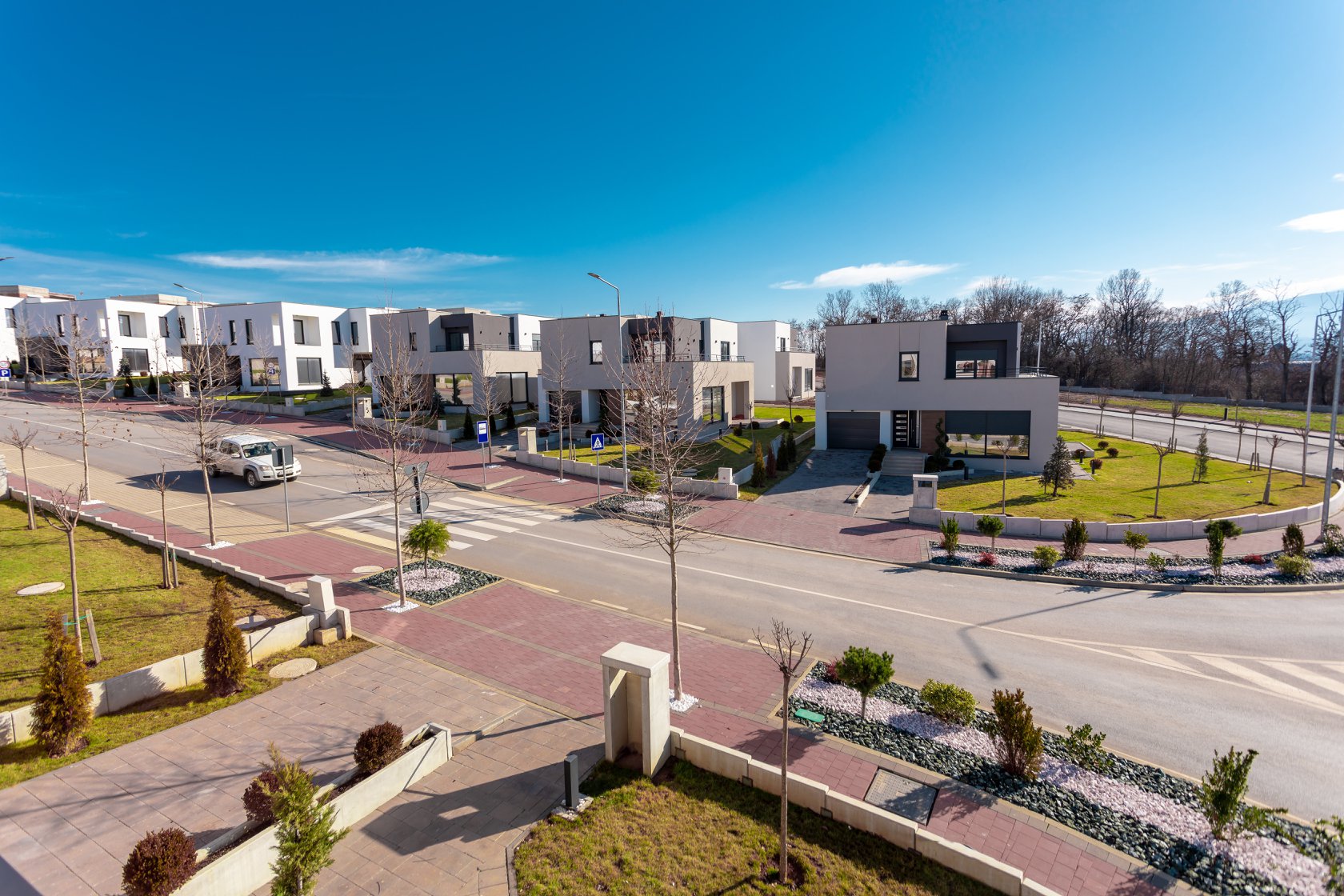 But the largest number of gated communities that Prishtina Insight found outside of the capital was in Peja, where, according to data provided by the municipality, there are five gated communities, four of which were built after 2016.

One is the ‘Babanaj’ neighbourhood, which is located close to the Peja-Decan route. It is home to Januz Gjoci, who moved there from the village of Rasic nearly five years ago at the insistence of his sons.

Gjoci tells Prishtina Insight that he is not so keen on the neighbourhood. “The conditions are very good – clean air, water, peace – but I don’t like it because I feel lonely. It looks great here, but you don’t have anyone to talk to,” he says.

The neighbourhood is often quiet due to many of the houses not being occupied because the owners live abroad – including Gjoci’s sons, who own his house.

Gjoci says that even most of the residents in his neighbourhood that still live in Kosovo tend to be away for most of the week. “There are houses bought by people who use them only on weekends – businessmen or politicians,” he explains.

Swiss-style modern architecture is abundant in the very green Babanaj neighbourhood, with house prices starting at around 170,000 euros. The cost of living in the neighbourhood is also not cheap.

“During the winter we pay around 600 euros for electricity, because these houses have a sophisticated heating system throughout the house,” says Gjoci.

Belegu also acknowledges that living expenses are higher in gated communities. “It’s better to live in this neighbourhood, it’s not cheaper,” he says. “It is more expensive than to live in the city, you have to have a car, pay for maintenance.”

Artan Mustafa, a social policy researcher, says the increase in the number of gated communities reflects a change in society, and the property market developing beyond simply providing a place to live.

For Mustafa, this new reality of widespread gated communities is a symbol of social inequality, and the widening gap between a privileged class and the majority of the population. According to the Kosovo Agency of Statistics, 18 per cent of Kosovo citizens lived in poverty in 2019.

Leart tells Prishtina Insight that while he does not feel like a member of a privileged class, he believes that society views residents of Marigona in a certain way. “We don’t dare tell shopkeepers and craftsmen that we live in this neighbourhood,” he says. “They raise prices right away if they understand that we live in Marigona.”

Without selling previously inherited property, owning a house in Marigona seems all but impossible for most workers. Even if an employee earning the average public sector salary of around 500 euros dedicated it all to purchasing property in Marigona, it would still take around 35 years to pay for even the most affordable houses in the neighbourhood.

For Mustafa, the rise of an economic class that is able to buy property in Marigona must be understood from a broader socio-historical perspective.

He believes the birth of this upper class dates back several decades, to the 1960s, when the Socialist self-management system began to apply housing policies to employees of the civil service and public enterprises in Yugoslavia. With the collapse of this political system in the 1990s, residents of these buildings became property owners for a very ‘symbolic’ financial cost.

“Some of these houses now belong to that high class of people created during the socialist system,” Mustafa says. “That is, some of them have sold their properties and bought [in gated communities].”

Mustafa believes that other characteristics of the class of people purchasing property in gated communities include business elites and “a high-level bureaucratic political class that has been enriched largely by illegal means.”

Leart mentions a kind of discrimination experienced by inhabitants of Marigona due to some of its residents’ political backgrounds, but Belegu believes there are many who enjoy the privilege of having famous people as neighbours.

“When you have good living standards, of course you want to feel a little special. Now, whether it’s right or wrong, that’s another matter,” Belegu says with a smile.

Without a large cultural change, Mustafa feels that gated communities and the social inequalities that fuel them will only grow.

*Name changed at the request of the interviewee.