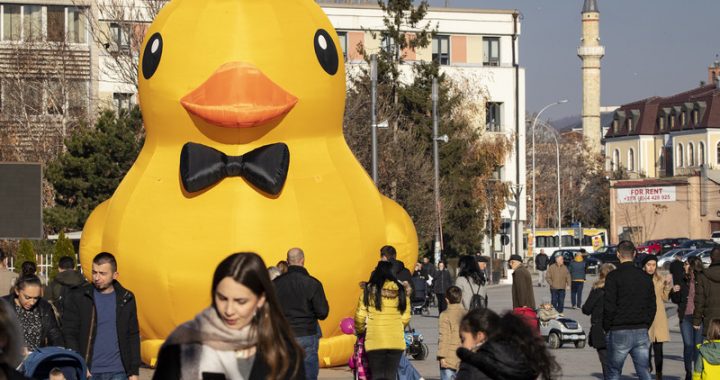 Pedestrians walk nearby a huge inflated rubber duck in Pristina, Kosovo, 09 December 2018. The six meter tall rubber duck is placed in front of the government building of republic of Kosovo to mark the international anti-corruption day. EPA-EFE/VALDRIN XHEMAJ

Kosovo has made progress in the fight against corruption over the last year, according to the international watchdog Transparency International, which on Tuesday January 25 published its latest Corruption Perception Index for 2021. It gives Kosovo 39 out of 100 possible points, three more than its score in 2020.

Kosovo now ranks 87th on TI’s list of 180 countries, 17 places up on last year, a place shared with its neighbour North Macedonia as well as with Morocco, Ethiopia, Colombia, Guyana, Suriname, Tanzania and Vietnam.

The French embassy in Kosovo tweeted praise for Kosovo's progress in the fight against corruption. “Good news. Kosovo marks progress by rising 17 places compared to last year in the corruption perception index,” the embassy wrote.

Since 2012, Kosovo has shifted between 34 points and 39 points, according to the system used by Transparency International.

Transparency International ranks 180 countries and territories around the world each year based on the perceived level of corruption in the public sector. The index uses a points methodology, where zero values ​​indicates a very corrupt country, and 100 for a country devoid of this phenomenon.

Transparency thus gives lower scores on its index to countries that violate civil liberties and are corrupt. With violations of rights, the level of democracy decreases and the possibility for authoritarianism increases, it says.

Kosovo has seen peaceful transitions of power between governments over the last years. Its parliament was the only one in the Western Balkans- and one of only five in all of Europe- that did not transfer decision-making powers to the executive when the pandemic hit. The country showed a genuine will to fight corruption by investigating potentially corrupt leaders and adopting a strategy on rule of law.

Most countries of the region score approximately the same points as Kosovo, except for Montenegro.

Northern Macedonia scored 39 points in 2021, four more than the year before. Albania marked a small decline and Serbia remained in the same place as the year before. Bosnia and Herzegovina did not move from its previous position. Montenegro remains the frontrunner of the region, marking a slight increase from last year.

The global average for 2021 remained unchanged, for the tenth year in a row, at 43 out of 100 points. “Two-thirds of the countries score below 50, which shows that they have serious problems with corruption, while 27 countries are at the lowest point ever,” the Index writes.

Since 2012, 23 countries have fallen down the rankings in the fight against corruption, including Australia, Canada and the United States. Estonia and Armenia are among the countries that have made progress in the other direction.

Transparency International has called on governments to be more committed to anti-corruption and protection of human rights goals, and urges people around the world to demand change.