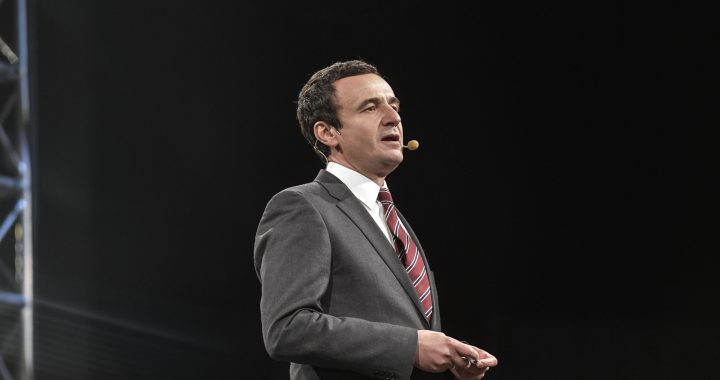 Kurti urges for discussion on reparations in Kosovo-Serbia dialogue

While negotiations between the winners of October’s parliamentary elections continue, Vetevendosje’s Albin Kurti has already used several media appearances to stress the need to discuss wartime reparations in the Brussels dialogue.

While results from the parliamentary elections on October 6 are not yet officially certified, Vetevendosje currently look set to finish in first place, and are in ongoing talks with the Democratic League of Kosovo, LDK, about forming a governing coalition. Vetevendosje leader Albin Kurti meanwhile, is widely expected to become prime minister.

In opposition, Kurti consistently pressed for a different approach to Kosovo’s participation in the EU-facilitated dialogue with Serbia, including discussing issues related to the Kosovo war.

Post-election media appearances suggest it is a position he will stand by. In various interviews for both international and local media, Kurti has reiterated that he believes Kosovo should aim to put the subject of war reparations on the table in the dialogue and seek compensation from the state of Serbia for the human and material damages caused in Kosovo in the 1998-99 war.

Speaking to an Albanian news channel, Kurti claimed his approach will be entirely new. “I am the first prime minister that will officially demand the debts, and I will keep Brussels, Washington, New York, London, Paris, and Berlin CC-ed for that debt that Serbia owes us,” he told News24. “Serbia owes us billions and we have an obligation towards all of the martyrs and the more than 1,000 children that have been killed in this country.”

Through the Brussels based dialogue, Kosovo and Serbia have signed numerous agreements over the last eight years, on subjects including energy usage, freedom of movement and recognizing educational diplomas, but never on any issues related to the Kosovo war.

Discussions over reparations have never previously been on the agenda, though EU spokesperson Maja Kocijancic told BIRN that both parties are able to propose any issue to be discussed. “The EU facilitates the dialogue,” Kocijancic said. “The content, the proposals that come to the table, and the agenda belong to the parties.”

Bekim Blakaj is the executive director of the Humanitarian Law Center in Kosovo, an NGO specializing in dealing with the past and transitional justice. He believes that prioritizing the issue of war reparations in the dialogue seems ‘impossible,’ as there is a lack of proper documentation of the damages caused.

“It is necessary to document all the crimes and damage caused by Serbian rule in Kosovo,” Blakaj told BIRN. “None of the crimes committed by Serbian forces in Kosovo will be accepted without judicial processes that bring verdicts against those who led Serbian institutions during the war, and who planned the war crimes in Kosovo.”

For Blakaj, the potential for war reparations is only possible if both parties first agree to concrete steps that would shed light on the issue of missing persons, as well as to legal cooperation between Kosovo and Serbia to indict those who commited war crimes.

The dialogue between Kosovo and Serbia has been at a standstill for almost a year after the Kosovo government imposed a 100 percent tariff on all goods originating from Serbia and Bosnia and Herzegovina in November 2018. The government, then led by former prime minister Ramush Haradinaj and which subsequently dissolved in August 2019, described the tariff as a “retaliatory policy” after an “aggressive” campaign from Serbia to obstruct Kosovo’s membership to INTERPOL. The tariff remains in place.