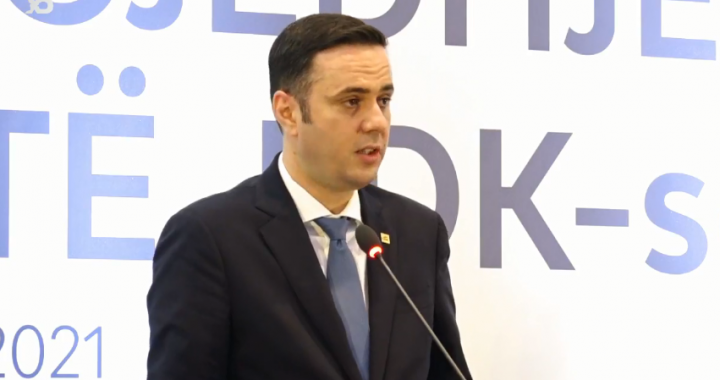 Vetevendosje’s attempts to amend the Law on General Elections has been lambasted by opposition parties, with LDK threatening to pull out of a parliamentary presidential vote and send the country to early elections.

LDK leader Lumir Abdixhiku has called for the withdrawal of a draft law amending the Law on General Elections. He added that failure to do so would endanger LDK’s participation in the vote for the country’s next president, risking sending the country to yet another snap election.

“If this law is not withdrawn, then Prime Minister Kurti is sending us to elections,” Abdixhiku told a press conference.

In a surprise move, the acting head of Vetevendosje’s parliamentary group, Mimoza Kusari Lila announced earlier on Friday that the party would seek to amend the Law on General Elections through an expedited process, prior to the election of Kosovo’s next president.

A draft law amending the electoral process was then passed at a meeting of the cabinet and is scheduled to be proposed to the Assembly at 21:30 on Friday night.

Speaking at the government meeting, Prime Minister Albin Kurti stated that the draft law being proposed was not new, and would guarantee the right for citizens voting from abroad to vote at Kosovo’s consulates and embassies.

In the most recent snap parliamentary elections on February 14, Vetevendosje received more than 75 percent of votes cast from abroad.

Opposition parties have reacted extremely negatively to Vetevendosje’s attempts to amend the law, arguing that the process was being rushed, and not being conducted through the appropriate channels.

The head of AAK’s parliamentary group, Besnik Tahiri, stated that “only in totalitarian systems, in systems where there are serious deficits of democracy, is a law issued for amendment and change which regulates the fundamental right to be elected and to elect.”

LDK meanwhile have described the move as “blackmail”, accusing Vetevendosje of trying to ensure opposition MPs participate in a parliamentary vote for their candidate for president, Vjosa Osmani.

According to the Kosovo Constitution, 80 MPs must be present for the vote on the presidency to be valid. Recent reports suggest that this quorum may not be achieved, despite Abdixhiku’s promise earlier this week that LDK would participate in the vote.

Failure to elect a president through the parliament would result in yet another snap election being called, which would be Kosovo’s third in an 18-month period.

Abdixhiku stated on Friday that LDK had shown its desire to be constructive by agreeing to participate in the election of the country’s president, but stated that Vetevendosje’s attempts to amend the Law on General Elections “endangered this constructivity.”

“I call on the government to withdraw from this blackmail towards the opposition,” he said.

Earlier on Friday, Speaker of the Kosovo Assembly, Vetevendosje’s Glauk Konjufca dismissed accusations of blackmail. “The necessary rights of our diaspora are not blackmail for anyone,” he stated. “It is for the good of our people living outside Kosovo.”

Konjufca added that elections would be triggered only if opposition parties only if more than 40 MPs were absent during the vote for Kosovo’s next president. “Only THEY take responsibility for new elections and no one else,” he said.