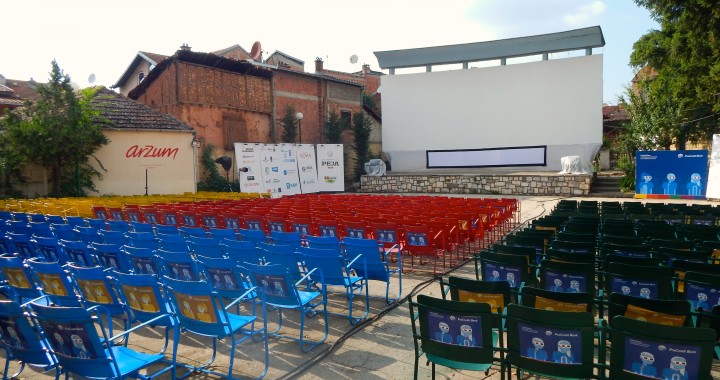 Lumbardhi advocates: What’s next for Prizren after Dokufest?

As Dokufest 2016 wrapped up over the weekend, a group of anti-privatization advocates ask: what will happen in Prizren until next summer’s edition of the international film festival?

On Tuesday, a panel of four conservationists convened in the Mehmet Pasha Hamam to discuss the current situation around Prizren’s Lumbardhi Theater.

The Lumbardhi Foundation’s Ares Shporta, Dokufest’s Veton Nurkollari, Vasıf Kortun from Istanbul-based cultural institution SALT, and Aslıhan Demirtas, the principle of the Istanbul and New York based Aslıhan Demirtas Research and Design Studio, each called for the theater’s preservation and revitalization.

“Conservation is actually a progressive idea because it gives something a future. We want to breath new life into Lumbardhi,” Demirtas said.

Lumbardhi opened its doors in 1952, and until closing its doors during the Kosovo War, it was one of the most popular cultural spots in Prizren. As the second biggest outdoor cinema in Yugoslavia, it was significant to Prizren’s modern cultural identity as a city of film and culture lovers.

“We have an emotional attachment to this cinema,” Nurkollari said.

Dokufest’s very existence is owed to the grassroots work of a handful of dedicated Prizrenalis that came together to re-functionalize the theater in 2002.

However, in 2007, former mayor Eqrem Kryeziu attempted to demolish the cinema and turn it into a parking lot. A civil initiative succeeded in protecting the theater’s status until 2014, when the Kosovo Privatization Agency began making plans for the theater’s liquidation.

Again, activists organized to save Lumbardhi and this time garnered the attention and support of Kosovo PM Isa Mustafa, Albanian PM Edi Rama, Kosovo Ministry of Culture, and 58 NGOs, and even the Privatization Agency itself to put the liquidation process on hold. The theater is currently listed as a Monument Under Temporary Protection on Kosovo’s Cultural Heritage List.

The Lumbardhi Foundation, established in April 2015, is currently attempting to create a functional public space that will support Prizren’s needs, particularly for the youth.

“What happens after Dokufest? We don’t have a theater, just a space standing as one. We don’t have a gallery, we produce little culture, we don’t have public space in the winter, and Lumbardhi’s current situation is not adequate for developing longstanding cultural projects,” Nurkollari said.

A functional year-round space, the panel argued, would help curb Prizren’s brain-drain. “What kind of city would Prizren be without Dokufest? Such cities aren’t livable for their youth, and then the migration of youth to the centers starts,” Kortun said.

The most important piece to the Lumbardhi Foundation’s vision for a prosperous future for the theater is public ownership.

“The building is currently in a state of convenient absence and institutional confusion. Everything is vague right now because it is still in process,” Shporta argued.

Meetings began taking place between the Lumbardhi Foundation and the Ministry of Culture, Youth, and Sport to dictate a plan for Lumbhardi’s public management in May of this year. But the building’s legal status is still at risk. As of now, Lumbardhi is still under the privatization agency’s jurisdiction.

The management plan to expropriate ownership to the Ministry of Culture, Youth, and Sport is expected to be negotiated and finalized by the end of 2016. Until then, Lumbardhi’s advocates continue to demand to “make Lumbardhi public again!”