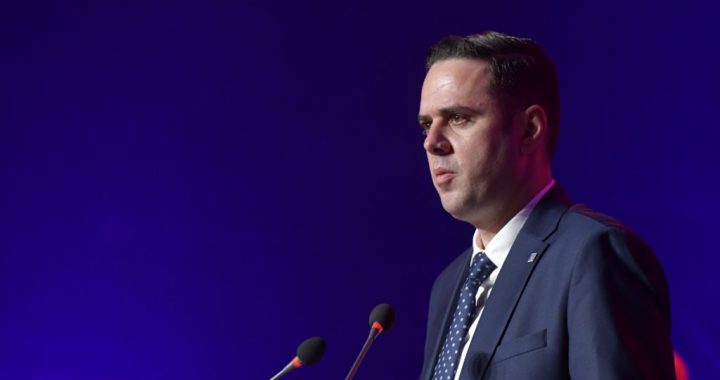 Following his election as new leader of the the Democratic League of Kosovo, LDK, Lumir Abdixhiku vowed to pursue reforms, 'prove the doubters wrong' – and restore his party to its old primacy in politics.

Lumir Abdixhiku has been elected the new chairperson of the Democratic League of Kosovo, LDK, exactly one month after Kosovo’s oldest party was humbled disastrously in parliamentary elections, promising to restore the party “to its original place”.

He won the vote by a landslide in the first round with the support of 191 of 335 party delegates. His rivals, Gjilan mayor Lutfi Haziri and outgoing Minister of Agriculture Besian Mustafa, won 116 votes and 16 respectively.

The 38-year-old economist becomes the youngest LDK leader ever elected, and his mandate will run until 2023. He has been an LDK member since 2017 and was elected to parliament in subsequent elections.

Abdixhiku’s stature within the party grew year by year and in 2020 he was made Minister of Infrastructure in the short-lived government led by Vetevendoje’s Albin Kurti, in which the LDK was a coalition partner.

When Kurti’s government lost a no-confidence vote, tabled by the LDK itself in March 2020, Abdixhiku stood aside. He did not become a minister of Avdullah Hoti’s new LDK-led cabinet.

He returned to the party before the February 14 snap elections as a candidate for MP, winning the third highest number of votes of any LDK candidate – 25,267.

After winning the leadership of the LDK on Sunday, Abdixhiku took to the floor to highlight the need for thorough reforms.

“We need to start from ourselves for our great comeback … The way ahead requires reforms and we will do reforms. I am sure we will prove the current doubters and permanent sceptics wrong,” Abdixhiku said.

The result was the LDK’s worst in its 32 years of history and triggered the immediate resignation of its leader, Isa Mustafa, less than 24 hours after the vote closed.

Kosovo analyst Astrit Gashi said Abdixhiku’s election as LDK chief was “perhaps the necessary change” that the party needed to make after its poor performance in the elections.

But the real challenges, according to Gashi, start now.

“The new chairperson has a long and arduous road ahead. He should surpass himself and become a leader who brings synergies together to push forward his vision,” Gashi said.

“He should listen carefully to the voices of sceptics and critics and not be locked in the shell of [party] followers and servants,” Gashi added.

The LDK was the first ethnic Albanian party formed in Kosovo, in December 1989, when the province was still part of Serbia, ruled by Slobodan Milosevic.

Under its first leader, Ibrahim Rugova, it led ethnic Albanian resistance to the Milosevic regime for a decade, advocating non-violence and the creation of “parallel” systems of education and government.

In the first free elections held in Kosovo, just after the war with Serbia ended, in 2000, it surprised many when it won control of the vast majority of municipalities.

The LDK’s political dominance lasted until the 2007 elections when, following Rugova’s death in 2006 and growing internal disputes, it lost to the growing PDK.

While the results of the 2017 local elections in Kosovo showed a significant increase in its popularity, when the LDK won control of the biggest number of municipalities, in the 2019 legislative elections the LDK came second with 24.5 per cent of votes while Vetevendosje inched ahead with 26.3 per cent.