Negligence and corruption across Kosovo’s private and public higher education institutions is causing social and economic degradation. The new government needs to step up and pave the way for long-term, sustainable development at Kosovo’s universities.

After emerging from a parallel system in the 1990s in which education was provided in makeshift schools inside people’s homes as Kosovo Albanians were excluded from educational institutions, the education system in Kosovo is still yet to stabilize, even 11 years after the country’s declaration of independence.

In 2015, Kosovo’s 15-year-old students were ranked third from last among the 72 countries that took part in the Programme for International Student Assessment, or PISA.

These students, now at university age, are the product of the highly problematic education system that prevailed after the 1999 Kosovo war. The PISA results, for the first time, gave a measurement of what children have actually learned in their schools and how capable they are of applying that knowledge in their everyday life.

Since the postwar period, investments in education were generally made in the construction of schools, in other words, investments in concrete. Currently, Kosovo is facing an extreme politicization of both secondary and higher education, as the academic world is plunged into chaos by a shortage of professors, a lack of scientific research being conducted in universities and degrees that do not generate employment.

According to statistics from the last academic year, about 34 per cent of high school graduates are enrolled in university. This year, over 10,000 undergraduate degrees were obtained.

Although the roots of reforming the education sector may be found in pre-university education, this article focuses on higher education and its need for change and reform. Investments in this sector show gradual results, which often means Kosovo’s short-lived governments fail to make it a priority.

It has often been said that there are economists and lawyers ‘all over’ Kosovo, while dozens of jokes have been told at the expense of waiters equipped with master’s degrees.

The future government should seriously think about a national strategy for studying labor market needs and adapting those needs to the courses offered for study at universities. This strategy should not be limited only to the needs of the Kosovo market, but also to the demands of the labor market in the region and Europe. 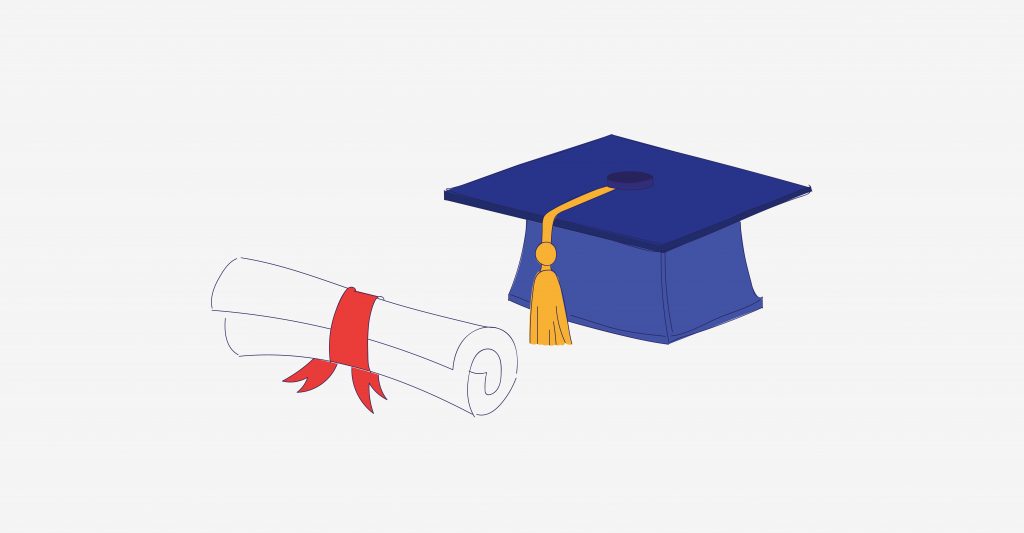 Currently, the unemployment rate is quite high among social science graduates, while there is a deficit of personnel and students in the natural sciences, mathematics and similar subjects. Although political parties have identified this issue and made promises to remedy it, so far no concrete steps to address the problem have been undertaken.

Past governments have been successful at throwing money at various public sectors, but has failed to invest in their longevity through sustainable education. For example, there are no special scholarships for students at the Faculty of Agriculture, despite the fact that 40 million euros in grants and subsidies per year are provided by the government to the agricultural sector.

At this point, however, the tendency to make arbitrary and impulsive decisions to solve this problem must be avoided. A government should never surpass the authority of the Kosovo Accreditation Agency’s National Quality Council, NCQ, the professional board of experts charged with decision-making about Kosovo’s higher education institutions.

Such was the case when outgoing Minister of Education, Science and Technology, Shyqiri Bytyqi, along with the outgoing Minister of Health, Uran Ismaili, believed that some additional students should be enrolled at the Faculty of Medicine. Bytyqi obliged the faculty to expand the list of admissions, completely ignoring the opinion of Accreditation Agency experts, who are entitled to determine the number of students to be admitted.

The future government should entrust such decisions to the Accreditation Agency, specifically the professors elected to the NCQ, in collaboration with the Academy of Arts and Sciences, to recommend the appropriate time to push forward or pause study programs as per the needs of the labor market.

Such a strategy should be periodically implemented over a period of 10 years. In the meantime, each faculty should establish advisory bodies comprised of companies, and private and public sector investors interested in employing certain personnel, thus keeping universities informed of specific market needs and allowing them to continuously design and modify programs.

Giving the regional universities a profile

The excessive number of graduates in certain fields has not been alleviated by their provision at the six regional universities established in 2014.

Outgoing Minister of Education, Science and Technology, Shyqiri Bytyqi proposed reducing the number of programs at the regional universities but the idea was eventually silenced. However, the debate over the quality of these universities was revived by the decision by the Kosovo Accreditation Agency to not grant accreditation to three universities for the 2019/20 academic year.

The idea of profiling the universities to cater to specific needs has also been discussed. Some of these universities had previously operated as branches of the University of Prishtina, with programs specialised in specific areas for each municipality. For example, Mitrovica can become the academic city of metallurgy, geology and more.

Restoring the regional universities’ status to that of a branch of the University of Prishtina would allow specialised diplomas to be awarded from a more prestigious institution, with 50 years of history and a reasonable reputation in the regional rankings.

In addition to the need for profound reforms in the national education strategy, the physical conditions of study in the faculties within public universities do not meet the required standards.

This year, the rain caused considerable damage to the Faculty of Mathematical Sciences and Philology. This understaffed faculty has been operating without a main building for years. Laboratories for students of physics, chemistry, and biology are either missing or are poorly equipped. Earlier this year, biology students boycotted lessons because of mold-filled rooms.

Despite these pressing issues, for the University of Prishtina, it seems, it was more urgent that the university’s rector be given a car worth 38,000 euros. 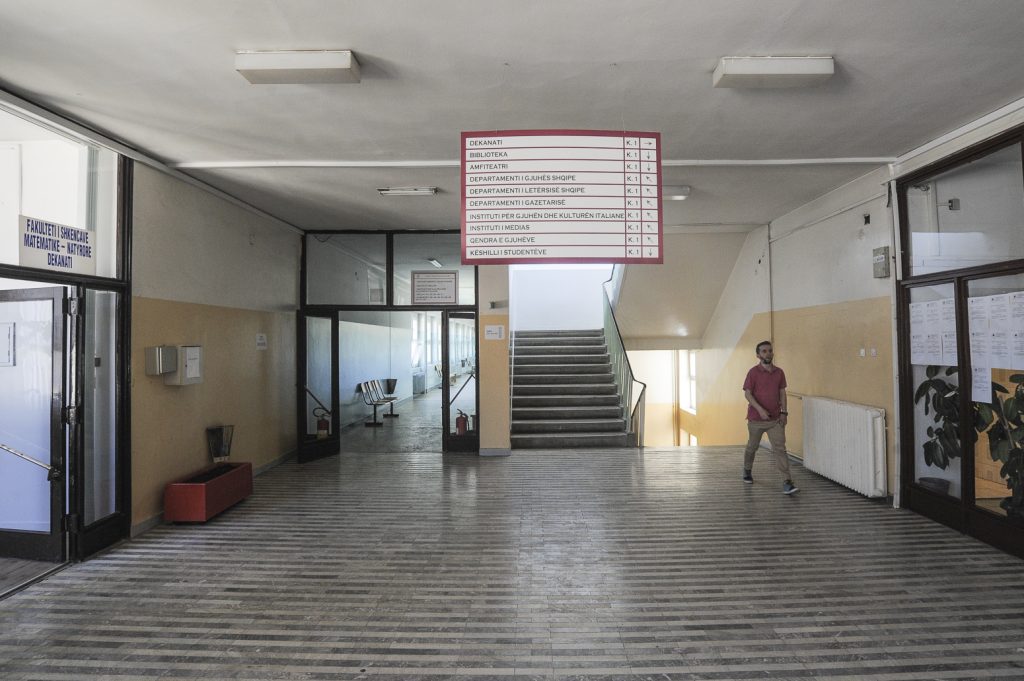 A special fund for upgrading the university’s infrastructure should be allocated. Investments in guards as well as the methods to prevent or punish those who intentionally cause damage to university campuses or the interior education-related facilities should also be invested in. It is of utmost importance to transform the University of Prishtina campus into a hub for youth activities and accommodation, but this requires investment in lighting and cleaning at the very least.

The interest in investing in education has been relatively small, but interest in controlling the sector has not. This is because the education sector is seen as a golden opportunity for votes. Politicians have used their influence in the field of education to achieve simple favors, including outgoing prime minister Ramush Haradinaj, who publicly attempted to enroll his advisor’s son at the University of Prishtina.

The most serious interference was in 2017, when Haradinaj dismissed the entire National Quality Council, NCQ, which seriously worsened the reputation of the Kosovo Accreditation Agency in the eyes of international organizations. Haradinaj also publicly pressured the current NCQ following the decision not to approve the accreditation of three universities in July.

The future government should keep its hands off these university positions and must not interfere with the work of the Accreditation Agency. The first step towards maintaining this independence is the appointment of a director of the agency at the earliest opportunity, a position which was suspended by this government, allowing an acting director chosen by the education minister to lead the agency.

Efforts should be made for the future council to be composed of professors and retired academics or experts in the key areas deciding on the accreditation of programs and institutions, minimising the risk of conflict of interest, pressure, and blackmail.

Colleges should strive to strictly adhere to the country’s accreditation rules, in particular the registration exam, but this does not mean that colleges should be subject to the national strategy for harmonizing labor market programs. They should be free to open whatever program they want, as long as they meet the criteria designed by the Accreditation Agency

This enables healthy competition in the market related to the private and public sectors, and promotes improvement in the quality of services provided.

What needs to be put in place is a review on college licenses by the education ministry, a vetting process on college ownership and investigation into political affiliation within private institutions, and strict control over any public funds that go to these colleges. Owners of private colleges should be barred from leading any public education institution where they could potentially influence decision-making related to their business.

The expansion of Accreditation Agency personnel is also essential to enable periodic monitoring of compliance with the agency’s rules for public and private institutions alike, so that these universities are constantly informed on their timely fulfilment of all criteria and obligations required by the Accreditation Agency.

Considering the above, higher education institutions in Kosovo have bypassed the ‘study’ component of education. Students are taught by rote from textbooks, and this has prevented innovation or critical approaches to academia from emerging, as is usually the role of universities in the world.

Research-based works and academic discoveries are not encouraged, financially stimulated or supported. Academic staff that are often overwhelmed do what they need to get promoted and check the right boxes. Kosovo has the personnel, but not the adequate support for academic inquiry to thrive in its universities.

Haradinaj’s government created many ministries, including the Ministry of Innovation and Entrepreneurship. If a future decision does not cut this ministry from the government altogether, investing in science should become its financial priority.

Academic fraud and plagiarism have been a constant problem in higher education institutions, both for students and academic staff. However, the University of Prishtina Ethics Commission has tended to issue written warnings rather than other, more appropriate, preventive penalties. The development of national anti-plagiarism software should be included as a future step, and the University of Prishtina has already begun the bidding process aiming to develop software that controls plagiarism in academic work.

The aforementioned problems will haunt the next government and, possibly, the one after that. Investing and working in education is a long-term commitment, and does not bring results within the year.

Harmonization of the labor market with education will enable economic development and the growth of the country’s employment rate, while increasing the capacities of the Accreditation Agency will ensure quality in higher education and the production of valuable degrees for Kosovo’s students.

Keeping politics and corruption at arm’s length from the education sector will allow education professionals to do their job,  and reverse the brain drain our country is suffering from.