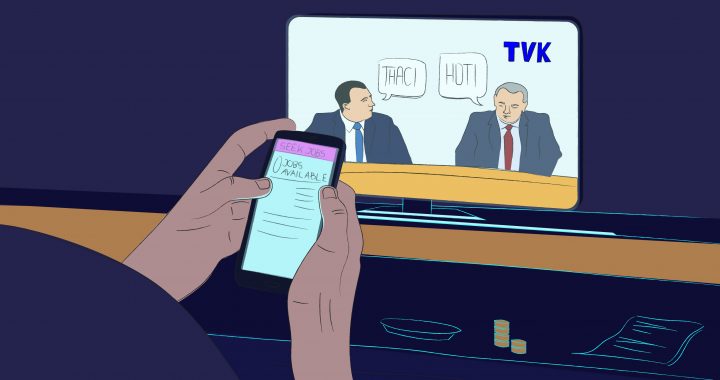 Despite the devastating repercussions that the coronavirus outbreak has had on people’s lives, the Kosovo media continues to focus on political games instead of discussions about how to salvage the economy.

A public survey published in June shows that the main response among people in the Balkans to the impact of COVID-19 is fear and uncertainty.

These results also reflect the sentiments of Kosovo citizens, but in recent weeks the country’s media have focussed on stories with little connection to the pandemic.

The strategy of the new Kosovo Government to spread optimism was somehow understood as signalling the end of the deadly disease. However, the removal of restrictions on movement and the reopening of the economy does not guarantee a return to the pre-pandemic situation.

Not all business activities are open again and not all those who managed to reopen face the same demands for goods or services, leading to huge job cuts. Even before the pandemic, with an employment rate of only 30.1%, Kosovo trailed behind other countries in the region.

As elsewhere in a world hit by the pandemic, Kosovo’s unemployed could also face a lost decade. No country is in the same situation as it was before the pandemic. The only difference is that in some countries the situation has gone from bad to worse. Economically speaking, Kosovo is one of those.

A recent study published by the GAP Institute shows that the spread of the pandemic in Kosovo, accompanied by the enforced shutdown of many business activities, had a tremendous impact on the job market. Data from the Tax Administration of Kosovo also show great fluctuations in employment rates before and after the coronavirus outbreak.

The industry that employs the most workers in Kosovo – wholesale and retail trade – has seen a drastic reduction in the number of workers. In March 2019 this industry employed about 80,000 people, in March 2020 this number dropped to about 43,000. The number of workers also dropped in the construction industry, from 21,000 down to 10,000, and in the manufacturing industry, from 34,000 down to around 22,000.

Data from the Kosovo Pension Savings Trust Fund also show a significant decrease in contribution payments made during April this year. In large municipalities there was an over 20% decrease compared to December 2019.

Meanwhile, data from the Kosovo Employment Agency show a rapid increase in the number of unemployed. In the first five months of 2020, more than 72,000 new jobseekers were registered at the agency, with more than 35,000 registered in May alone, an all-time monthly record. To put it another way, during April and May an average of 1,600 new jobseekers visited each of the 34 unemployment offices across Kosovo.

If you look further into the educational background of these jobseekers, the scale of the challenge becomes clearer.

First, the data suggest that the level of graduate unemployment is high and rising. In the first five months of this year alone, a total of 2,594 jobseekers with a university degree (Bachelor and Master) were added to those registered as unemployed. Yet, one would hardly remember having seen a TV debate where policymakers are asked about the causes of this phenomenon, or the quality of education, or the mismatch between education and the needs of the job market.

For each problem that Kosovo had before the pandemic we should ask how COVID-19 has made it worse and what should be done to address it. If Kosovo before the pandemic had churned out graduates with few prospects, what are their chances of finding a job now when opportunities are slim?

Even in normal circumstances it was harder for women to find a job in Kosovo compared to men. This suggests that the return of women to the job market after the pandemic could be more difficult considering the high level of their economic inactivity (78.8%), their low level of representation in managerial positions and other discriminatory practices such as the masculine language of job advertisements and men-dominated interview panels.

Again, I suspect one does not remember having heard a long discussion on a TV debate about how the pandemic has affected the environment of doing business for women, or which government measures are being drafted to help women return to the job market?

The third problem that the unemployment data show relates to the age of jobseekers. Around 62% of jobseekers are aged between 25-39. This is an age category eager to work, but also the most likely to emigrate.

When it comes to leaving the country, particularly to Germany, Kosovo citizens lead among the citizens of the Western Balkans. In a three-year period (2016-2018), nearly 205,000 employment contracts submitted by nationals of Balkan countries were processed by the German Federal Employment Agency.

Despite having the second smallest population in the region, Kosovo had the largest number of both applications and visa approvals: one third of all applications came from Kosovo, and around 24% of all working visas were issued for Kosovo citizens.

The desire to emigrate can grow even stronger after the pandemic. According to the Balkan Public Barometer 2020, 43% of Kosovo citizens said they would consider leaving and working abroad and the prospects of emigration due to the loss of jobs are very real.

Yet two-hour debates with our policymakers on the need to curb emigration have been absent, as have lengthy discussions on the feasibility of the government’s economic recovery plan.

This does not mean that our media have completely ignored the COVID-19 crisis and its social and economic impact, both broadcast and online media have reported on the immediate impact of the pandemic.

However, the depth and consistency of the coverage is not enough compared to the tremendous impact of the pandemic on our society in general, and on increasing unemployment and poverty in particular. Bearing in mind the high amount of news that political elites generate daily, I fear that the focus of the media will further deviate from the most pressing topic of our time – the impact of COVID-19 on our lives.

Our public discourse should change in favour of topics that concern citizens’ welfare, something that public media is obliged by law to do. Private media need to be reminded of this obligation while smaller outlets need editorial training to develop story ideas that tackle every aspect that the COVID-19 crisis had on our lives and the economy.

Jeton Mehmeti is the Research Director of the GAP Institute.