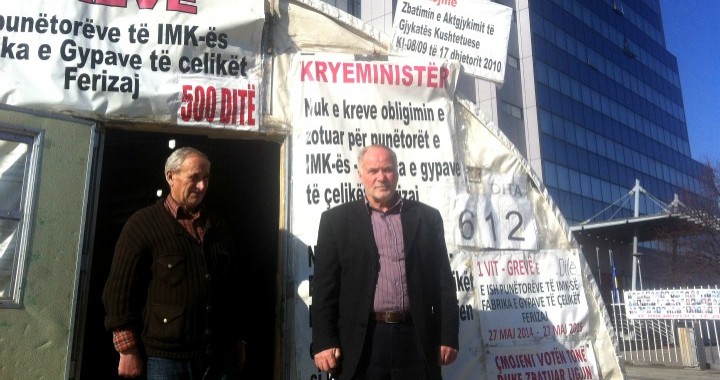 616 days amid the heat, frost and tear gas – inside the tent of the strikers from the Steel Tube Factory.

616 days. On the one hand, this very real and tangible number printed palpably outside the tent represents the irony of the workers’ struggle at the Steel Tube Factory in Ferizaj, and on the other, the irony of a society drained by life in transition. Their battlefield is by no means inconspicuous and occasional; they unceasingly soldier on right in the heart of the capital city. The past 616 days are a testimony to their struggle and exhaustion, but not their capitulation.

I don’t usually have tea in the morning, but these days, considering I was a guest at a “house” that was more akin to a hut straight out of a fairy tale, I betrayed my daily cup of coffee and accepted a chamomile tea instead.

In reality, the house hasn’t been invented in a fable; rather, it is a large tent in one of the most vibrant spots in Prishtina, facing the Government building of Kosovo, the bronze visage of Skanderbeg. They are a stone’s throw from the statue dedicated to Kosovo’s late president Ibrahim Rugova and the Benetton shop.

In beautiful and sunlit days such as these, knocking on a door that barely resembles one in the first place was not easy. A courteous man turned the handle and invited me in – “Come, make yourself comfortable.”

The large tent had long since become a home to the strikers who had already spent 616 days of their lives fighting for what they deem to be theirs.

The saga of a battle

Shyqeri Bajrami (63), who worked at the Steel Tube Factory in Ferizaj for 27 years, has, for 616 days, spent his working hours at the strikers’ tent. He was by himself when I first encountered him as his colleague and co-striker had taken off to fetch breakfast. The rest are back home washing.

“Today they’ll return and we will change shifts so that I can be at home to wash up and take it easy for a few days.” 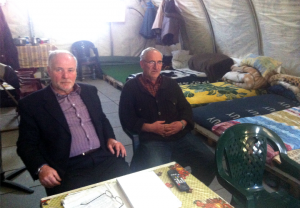 Shyqeri lives in Ferizaj and sets out towards his “second home” in Prishtina from there, as do the other strikers. “Lately, when it is my turn to take over the shift and get ready to depart for Prishtina, my wife – who is ill – has been telling me that she’ll leave me someday just like I’m leaving her… what am I supposed to say? Sometimes I tell her that it will all be over soon but she doesn’t know it yet.”

At the improvised home within the tent there are six beds covered with sheets of all sorts, a table surrounded by a few chairs, a makeshift kitchen, clothes hanging, large bottles of water, a fridge, a small oven, a TV, two radiators, a tea pitcher and a coffeepot.

They have onions as well. Do you ever cook, I asked. “Yes. – he says. – sometimes when we don’t have enough money to buy food we fix ourselves bean stew and, at times, noodles”.

You could hardly feel any hope in their hearts judging from their faces and voices. A couple of days spent in the tent, a couple of others at home with their families, a life split in two.

“This is not a way of living! How much longer does this have to go on?” I was unsure if he was asking himself, me, or wanted his question to be heard from above.

The privatization of the Steel Tube Factory in Ferizaj in 2007 by the Privatization Agency of Kosovo (AKP) has left 912 workmen of the economic ex-giant unemployed. In the year of 2000, the workers who were forcefully deposed from their jobs during the Serb regime of 1989-1999 filed a lawsuit at the Municipal Court of Ferizaj in search of personal justice.

The verdict returned at the Municipal Court was then confirmed by Kosovo’s Constitutional Court, yet the 912 workers never got the 30 million euros they were legally bound to receive.

27 years later, the saga of their battle continues.

It’s been a total of 616 days within the improvised house. While the clearly visible number printed outside the tent seems ironic at first glance, it represents the suffering of the strikers; along with the rest of the crumpled sentences on the tent, the worn out ex-workmen inside of it talk about struggle and exhaustion, but never once about surrendering. Although it is located right in front of the Government Building, daily passersby walk indifferently past the tent’s entrance. Perhaps they are used to seeing it as an inseparable part of the capital’s boulevard

I often approach the window from the inside and watch as the people move past, as I do myself, without ever going in.

We came as iron and turned into steel

We are joined by Ahmet Sylejmani (62), member of the Strikers Council. With as much courtesy as Shyqeri, yet with a leader’s rhetoric, he warm-heartedly welcomes me. “I’m at your disposal,” he tells me, as he puts a bulky folder of documents on top of the table. 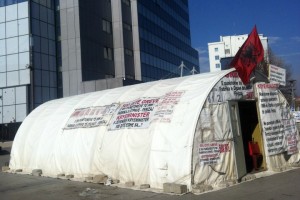 “All of the paperwork is contained in this folder. You can ask me whatever you like, before the 90’s, after the 90’s, anything. Praise be to God that we’re alive and have a voice because most of our friends have already parted.”

I ask him to tell me where his determination to push their struggle for justice forward is rooted, but Sylejman cuts my question short and says “we came as iron and became steel, we were toughened.”

He has worked at the Steel Tube Factory (IMK) for 17 years, but nowadays he is short of choices. Starting at day one of the strike on the 27th of May 2014 and up until the 616th on the 31st of January this year, Sylejman and 44 of his fellow strikers have been wanting to show everyone the love they have for the country, according to him. “Well, let the government do its job and have our issue dealt with. We’ve organized 124 protests; the scale of our problem has increased dramatically, there is no turning back at this point.

Days and nights beneath the tent

But what thoughts do coffee/tea-induced chats bring along? They reminisce about the time they spent working together at the factory before the ‘90s, moments of joy and instances of standing up in protection of their right to work, a thing that was in peril due to the harsh circumstances in the late ‘80s and ‘90s. The member of the Strikers Council argues that back then, Kosovo’s society as a whole was more tight-knit and better able to deal with mutual hardship. “Thus, calling these things to mind, we kill our time.”

There are many echoes lingering in the memories of the ex-workers, but today things do not look particularly good for them. Despite of that, not all of the 912 listed workmen ended up sharing the same fate. At the top of the list is Abaz Lushi, and at the end is Zyber Namani.Whilst the other 900 workers are at home, the 12 remaining shoulder the burden for the rest.

Ahmet says that the others had entrusted them with the cause and that the damages would be equally divided amongst the workers, provided they’re granted. The tent has only stood empty for one night: Due to the exceptionally cold temperatures and snowfall this winter, on the 6th of January at about 3:30 PM, Shyqeri and Ahmet could not stay in the tent because of the danger they would be frostbitten.

When there’s a protest being held outside, the only thing that help the “residents of the house” overcome the effects of tear gas are onions bulbs.

“Ahh!” – they utter: “When word reaches us that protests are happening, we get our onions ready and keep them close to our faces, because the tent doesn’t shield us from tear gas. There is no way to escape, and sometimes even, stones are thrown towards us. During the last protest we were very concerned for our health, but we couldn’t do anything; later, the police came and asked us whether we were OK and told us that we should go to hospital, but we never went.

I ask them how they are able endure the rise and fall of the city’s routine.

Ahmet and Shyqeri reiterate that they are men of their word and that they set about their strike two years ago without the intention of giving up until the legal damages are paid. Sylejman says that in 2014-2015, the strikers Council directed 28 requests to the then Prime Minister of Kosovo, Isa Mustafa, but they never received a reply. “He’s looking for a loophole but he won’t find one. There are no gaps in the paperwork.”

Despite of that, in the course of the electoral campaign of 2014, the strikers claim that visits to “their house” became more frequent. Virtually every political party has knocked on their door and tried getting their hopes up. “Every big political party, without exception, has vowed that if they ascend to power they will put our issue to rights. Yet it was Hashim Thaçi, the outgoing Prime Minister at the time, who outdid himself: he invited all of the hundreds workers, including the strikers, to dine at a hotel in Ferizaj. This is how they remember it: “Thaçi congratulated us on our resolution and promised that our demands would be met… if nobody does, at least a prime minister should keep his word. He then, in an attempt to redeem himself, said that the Board is incomplete, but now that he’s close to Isa [Mustafa] and the board is whole, I seriously cannot understand what they expect and why they are messing with us like this.

Open door and the last reception

Beyond the hypocrisy of political campaigns, Sylejman, as a member of the Strikers Council, says that in case the Kosovo Privatisation Agency rules against them, they will become more radical, but only time will tell how that will play out. Out of the folder crammed full with papers, he picks out the latest request that was addressed to the President to remind her of fulfilling the legal obligation.

Shyqeri, the man who first greeted me at the door, takes a bucket of water and starts rinsing his face and hands. “They sold our factory and fed themselves with our hard work. How can an industry such as ours be sold for so little money…” – he murmured, as water dripped from his hands and face.

Both Sylejman and Ahmet accompany me to the door. Outside the capital slowly regains its liveliness after a quiescent morning. “You’re welcome any time, we’ll be here!” the strikers remarked.

On women’s right to exist in public space