Imagine a great line of satire taken from your favorite late night TV program, a beautiful thought from the novel you’re reading, the inrush of avocado toasts and minimalist wardrobes you took in from your Instagram feed this morning, your anxieties about your own social media presence. Now imagine that stream of consciousness articulated into a narrative, reverberating alongside works of graphic design. That gives you an idea of what it’s like to witness a performance by Croatian artist Nora Turato.

The Amsterdam-based graphic designer and performance artist studied at the Gerrit Rietveld Academy and Werkplaats Typografie before starting a residence at the prestigious Rijksakademie. Prior to her Prishtina debut of her spoken word piece “Pissed Walking,” Prishtina Insight sat down with the artist to discuss her art as a performance of her private conversations with herself and the internet.

I love memes. I want my work to be that.

In “Pissed Walking,” Turato singsongs and growls, going from a frantic dialogue inside her own head to scanning the room, speaking to the audience with burning eye contact: “I want to see you fall… girls gotta look out for each other, that’s all,” she recites. “Your potential is your problem, a cloud ain’t puffy once you in it, that’s all.”

“I love these sentences… short snippets of truisms. But they need to be funny,” Turato told Prishtina Insight. “I love memes. I want my work to be that.” In a motion all too familiar, she then pulled out her iPhone to share a meme she saved from Instagram, a relatable and funny bite-sized image.

Turato was in a band in high school, but began to feel confined by the rules of songwriting. She turned to a cappella and then eventually to spoken word poetry. Art writers have described her work as “avant-garde hip hop” and “verbal vomit.” Turato herself described her practice as making narratives out of her “pool of sentences,” a notepad document containing tidbits collected from things that pop into her head while walking; drunk conversations; something she saw on Samantha Bee; reflections on what she’s reading, currently Eileen, the 2015 novel by Ottessa Moshfegh.

Her words could have come from the anxious and creative psyches of so many other women born in the early-90s that I know, except hers are crafted into a piece of performance art and are anything but private. 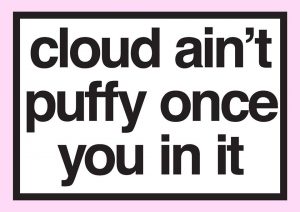 “I preach against private property as I jealously guard my own, I’m a millennial,” her script quips, before describing the act of “continuously clicking click farms,” consuming media headlines encouraging you to “declutter your life!”

Turato’s tone is simultaneously snide and empathetic, feverish but self-aware. It’s a kind of self-deprecating humor borne out of a life growing up on the internet.

“I’m not critiquing anybody. I’m just trying to [articulate] the thoughts that cross your mind… that mumbling in the head,” she said. “People find it funny and relatable because it’ll be about something where you thought you were the only one, but you’re not. Everyone else is thinking about this too.”

She is laughing both at and with millennial matters; implicating herself in internet culture and translating it into what she calls “European crooked English.”

“My work is talking about this whole new generation of European kids, and kids all over the world really, who are using this internet English. It’s just natural, I’ve been talking crooked English for nine years since I’ve lived in Amsterdam. It is a strain of language.”

Just like the strain of language used in the art world, she said, laughing. Mocking art world language is how she got into spoken word in the first place: “I would go to openings and take press releases and read them out loud. That’s how I started with performative talking–but I was doing it with my friends as a joke.”

A generation of youth is learning about theories on racism, feminism, and class consciousness through an internet connection–all while taking in the pop-culture flashpoints on minimalism, fashion, and ‘foodie’ culture. Both sets of ideas show up in Turato’s work, which explores problems of diversity in the art world and millennial examples of the ‘white savior complex.’

This access to information is what keeps Turato obsessing over the internet. While media organizations rely on clicks for articles published on their websites calling for us all to put our phones down, Turato is glued to her screen in Amsterdam, proudly in the middle of it all.

“Amsterdam isn’t exactly an art haven. Other than this residency program, it’s pretty provincial. There are some things happening of course… but it’s pretty small.” I asked her if she feels limited by that provincialism.

“No. Because I live on the internet, man.”