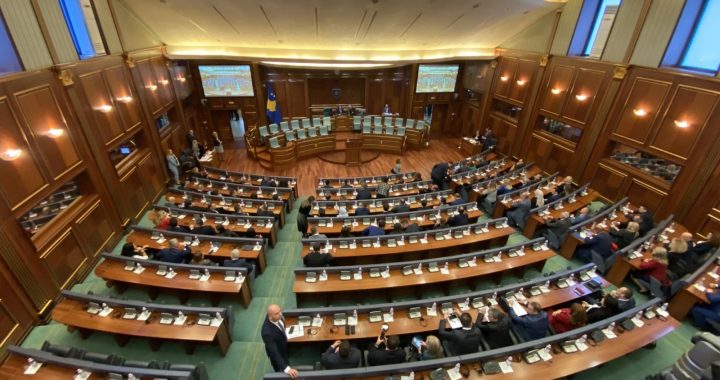 Polarised stances among MPs on the removal of the tariff on Serbian goods and its effects on Kosovo’s relations with the United States are being addressed in an ongoing extraordinary session of the Kosovo Assembly.

An extraordinary session of the Kosovo Assembly was called by the Democratic Party of Kosovo, PDK, on Wednesday to discuss the country’s relations with the United States following several public statements about withdrawing American troops were made by senior US officials.

The US is currently seeking the removal of the 100 per cent tariff on goods entering Kosovo from Serbia and Bosnia and Herzegovina, which were put in place by the previous Kosovo Government in November 2018.

On February 27, Prime Minister Albin Kurti outlined plans to gradually phase out the tariff, beginning from March 15, and replacing it with reciprocal economic measures towards Serbia. However, the move was rejected by US Special Envoy for the Kosovo-Serbia Dialogue, Richard Grenell, who described the plans as “a serious mistake.”

Grenell has called for the immediate and complete removal of the tariff, and Senator David Perdue, a close ally of US President Donald Trump, stepped up pressure with a tweet sent on Tuesday morning.

“For over two decades, US forces have helped keep the peace between Kosovo & Serbia,” Perdue wrote on Twitter. “Now, with historic progress in sight, Kosovo must do its part & abolish all duties imposed on Serbia. If Kosovo is not fully committed to peace, then the US should reconsider its presence there.”

The tweet received public support from Grenell, as well as President Trump’s son, Donald Trump Jr., who has no official role in the current American administration, and senator Rand Paul, who both made reference to withdrawing American troops.

During the session, Kadri Veseli, leader of the opposition and head of PDK, accused Kurti and his government of “dogmatic behaviour” that is jeopardising Kosovo’s alliance with the US.

“After a month of daily warnings from the US concerning the removal of the army and multi-million dollar projects, the government is causing great harm to Kosovo,” said Veseli. “The path that you have chosen is to divide people into two – pro-Americans and anti-Americans – destroying the social cohesion that our relations with the US have seen.”

Plans over the tariff have also created a rift in the coalition government between Kurti’s Vetevendosje and the Democratic League of Kosovo, LDK. At the parliamentary session, the head of LDK’s parliamentary group Arben Gashi urged the scrapping of the tariff.

“Mr. Prime Minister, decisions are expected from you, from us. No one will consider you a coward because you submitted to American pressure,” said Gashi.

“I am convinced that the normal path is replacing the 100 per cent tariff with reciprocal measures,” said Kurti, adding that its gradual replacement, which includes conditions that Serbia halts its derecognition campaign, would build a more solid foundation for the dialogue in the future.

Kurti added that scrapping the tariff would not result in the resumption of the dialogue but rather its conclusion, stating his belief that there is an agreement ready to be signed by Kosovo President Hashim Thaci and Serbian President Aleksandar Vucic.

“I am convinced that there is an agreement ready, and what is required is to break the Government of Kosovo, to break myself as prime minister, in order to boost the role of the powers that have made agreements on Kosovo’s behalf through secret negotiations,” Kurti said at the Assembly, adding that the aim is for Thaci to sign a ‘final agreement’ with Serbia himself.

On March 3, Thaci, following a meeting with Aleksandar Vucic in Washington DC stated his belief that the US should take the lead role in the dialogue. On Tuesday, he stated that he would not take part in the EU-mediated dialogue as president, while visa restrictions on Kosovo citizens inside the Schengen zone were still not lifted.

At the Assembly session, head of the Vetevendosje parliamentary group, Rexehp Selimi, tabled a draft resolution, which proclaimed, among other things, that it “is the Government of the Republic of Kosovo mandated to conduct talks and/or dialogue with Serbia and to make preparations for negotiations and to negotiate a possible final agreement.”

Voting on the resolution is expected to take place at the conclusion of the session.