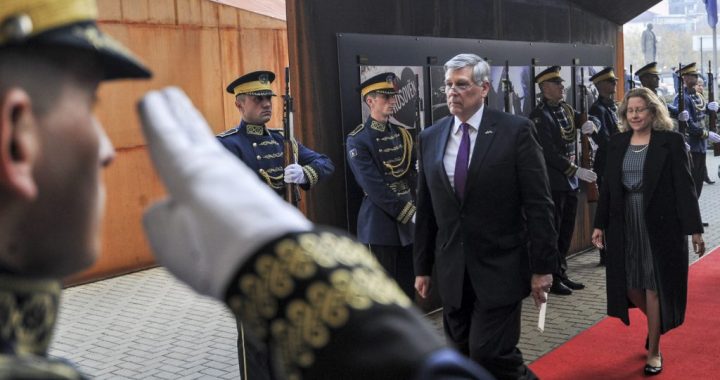 The recently sworn in United States ambassador in Prishtina, Philip Kosnett, said that “Kosovo has every reason, every right to have a self–defense capability,” regarding the transition from security forces to armed forces.

In an exclusive interview for the Kosovo public broadcaster, RTK, on Thursday, the new U.S. ambassador to Kosovo, Philip S. Kosnett, expressed his views on various prominent issues in Kosovo, highlighting support for the transition of the Kosovo Security Force, KSF, into a fully-fledged army.

Kosnett said that he has spoken to Kosovo’s leadership on how to include the country’s potential armed forces in peacekeeping operations overseas.

“The most important point I want to leave you with is if there are people who genuinely believe that Kosovo’s Police, Security Forces, Armed Forces—with any label—pose a threat to regional security, I think that’s another indicator of the importance of dialogue. I think that it is important for people in both countries to understand the perspective of the other side,” he said.

The Kosovo assembly will vote on a number of draft laws on December 14 that, if passed, will expand the mandate of Kosovo Security Force, despite Secretary General of NATO Jens Stoltenberg calling it “risky and ill-timed.”

Referencing the potential army, Serbian President Aleksandar Vucic said on Friday that the United States “is behind all of it,” agreeing with Kosovo Prime Minister Ramush Haradinaj’s remark on how the U.S. will always be on Kosovo’s side.

Kosnett said that the establishment of Kosovo’s army is a long process, and that the vote next week is not the most crucial element.

“Whether they pass this law or change the patches on their shoulders of the personnel on a certain date, is not the most important thing,” he said. “It is important for members of the Serb community and other communities to participate in a big way in the Armed Forces as they have in the KSF and in the Police.”

Regarding the prospect of a border correction between Kosovo and Serbia, an idea frequently vocalized by Kosovo President Hashim Thaci this year, Kosnett said that many people have gotten the wrong impression about the U.S. government’s attitude.

“I think some people have the misunderstanding that the United States has been pressing for a shift to the border or an exchange of territory. What we are interested in is an agreement that is negotiated in good faith by the two sides,” Kosnett said.

Although hesitant to “make big declarations” before learning more about Kosovo affairs regarding the 100 per cent tariff imposed to Serbian products, he said that the EU-mediated dialogue between Kosovo and Serbia has reached a “critical point.”

Kosnett was sworn in as the new United States ambassador to Kosovo on November 27, succeeding Greg Delawie who served from 2015 and 2017.