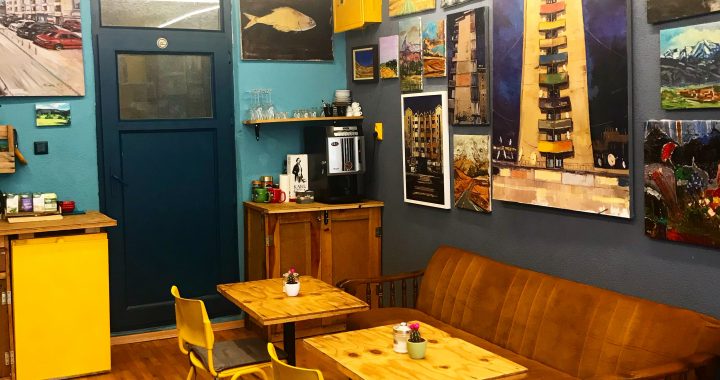 Palete: An open invitation to the artist’s studio

Guide: Two artists have opened up their Ulpiana studio to the public as a cafe and gallery, hoping that this is part of a transformation of their small neighborhood into an artistic quarter for Prishtina.

Artists and friends since primary school, Mentor Avdili and Shpetim Mehmeti have opened up their studio to the public, creating a new kind of space, ‘Palete,’ which exists in a middle ground between gallery, atelier and cafe.

Avdili and Mehmeti have been painting in their workshop in the Prishtina neighbourhood of Ulpiana since 2009, but last year decided to renovate it before relaunching on December 21 last year as a more public space.

Down a flight of concrete steps from Egnatia street and tucked underneath one of the Ulpiana’s Yugoslav-era tower blocks, visitors are now welcome to come to Palete for tea, coffee or raki while the artists attend to their canvases from roughly 10 in the morning until 10 at night.

The studio was stripped back to its bare concrete before being remade into its current form, a warm, bright room filled with books, light jazz and a faint smell of paint. Every aspect of the renovation was done by hand, with wooden pallets being repurposed as a sink, and strip lighting affixed to planks of wood.

The walls act as a gallery space, with almost every inch covered in artwork. Landscapes currently dominate the selection, with Avdili’s recent collection of Prishtina cityscapes, which were exhibited last year at Galeria Qahili and he describes as images fixed in his memory from his day-to-day life, placed alongside more pastoral, impressionistic works from Mehmeti, which were made as part of an artistic retreat in the mountains outside of Tetovo, North Macedonia.

Alongside being open to everyone to come for a drink, a chat or to explore Palete’s library of books on art, the pair also plan to offer memberships for those interested in painting.

For a monthly fee of 35 euros, members will have access to canvasses and acrylic paint, as well as the opportunity to “discuss art” with Avdili and Mehmeti, who do not see themselves as teachers, but are keen to help those who want to pursue painting.

The artistic duo hope that the space can be part of a wider transformation of this particular corner of Ulpiana – a number of ateliers exist on the street, alongside the Ekolektiv social center and the Serpent Claws nail salon.

Avdili and Mehmeti have been encouraging other artists to move into the surrounding units when they become vacant, in the hope of building this area into an artistic quarter for Prishtina. They believe that creating a hub for artists in the neighbourhood would help collectivise the city’s independent art scene and strengthen art’s relationship with the public.

Even if your passion for painting is limited, Palete stands out in the city’s ever-crowded cafe scene. Alongside its artistic flair, it also has a strict no smoking policy to protect the artworks, while the two artists’ distaste for discussions on politics make it a perfect place to escape an ordinary Prishtina afternoon.