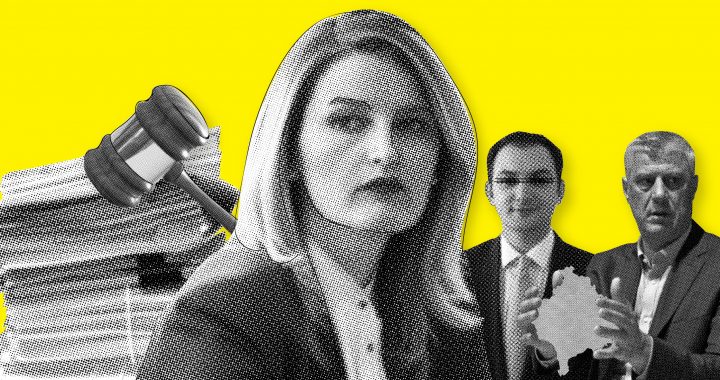 The defamation lawsuit filed against BIRN over its investigation revealing the involvement of public officials in promoting territorial exchange with Serbia is evidence of the lengths that some politicians will go to cover their tracks.

On June 26, Skender Musa, the legal representative for the Democratic Party of Kosovo, PDK, announced that a lawsuit had been filed on behalf of  Dhurata Hoxha, a former PDK Minister of European Integration, against Jeta Xharra, an investigative journalist, as well as KALLXO.com and Prishtina Insight.

The defamation suit challenges BIRN’s investigation that offered the public proof that both a PR company hired by the ministry and Kosovo’s Ambassador to France lobbied for a land swap between Kosovo and Serbia as a route to a final peace agreement between the two countries.

I understand the former minister and PDK are arguing that the investigation was fiction, that it was all a lie. However, the two stories published provide a great deal of evidence that the disgraceful act of lobbying to change the territorial boundaries of the country these institutions represent did in fact take place.

The most damning piece of evidence is provided in the first part of the investigation, published on 28 May, which included an important document: a report from Majorelle PR & Events, the Paris-based lobbying company hired by the ministry for 168,000 euros. In the document, the company reported back to the Kosovo authorities about its progress on “…Kosovo’s position, showing how territorial modification could, on the contrary, serve relations’ pacification…”

If this was not enough, on June 9 even more striking revelations followed. Jean-Baptiste Chastand, Le Monde’s Central Europe correspondent, revealed that in 2018 he met with a representative from Majorelle PR & Events and Qendrim Gashi, the Kosovo Ambassador to France, who promoted the advantages of a territorial exchange between Kosovo and Serbia.

Instead of resigning due to this scandal, Gashi, like Dhurata Hoxha before him, started attacking Xharra and accusing Chastand of lying – berating a journalist who is a citizen of the country where the ambassador is stationed.

As someone with three decades of experience in the French media, having been the head of the Albanian section at Radio France International, RFI, and as someone with experience of working with the Kosovo Ministry of Foreign Affairs, MFA, I cannot remain silent on this issue.

BIRN’s investigation brings forth indisputable facts about the ambassador’s implication in lobbying for territorial exchange together with Majorelle PR & Events, a company hired by the Kosovo Government. In response, Kosovo’s ambassador in Paris challenged Xharra to find a public statement in which he defends the idea of territorial exchange.

However, the fact that the Gashi did not defend this idea publicly does not prove that he did not promote it behind closed doors.

Gashi also accused Xharra of “deceit,” implying that she and Chastand were both lying about the facts. Accusations of this nature, made without bringing reasonable counter-arguments, cannot be tolerated from representatives of public institutions.

While political influence over the justice system in Kosovo may assure Gashi impunity for his accusations against Xharra, it is not the same in France where he can be sued for defamation against Chastand. If the Le Monde journalist decides to challenge his claims, Ambassador Gashi risks up to six months in prison, a sentence which would end his diplomatic career.

On a personal note, I also have reason to suspect Ambassador Gashi of suppressing the voices of opponents to territorial exchange.

In 2017, as part of my work with the Council for the Promotion of Peace Between Kosovo and Serbia, a body formed by the Kosovo MFA, I was asked to attend meetings with French authorities in November 2017 to discuss how France can assist the Kosovo Government in furthering Euro-Atlantic integration. I also helped arrange meetings for the MFA in Paris.

However, Ambassador Gashi then shut me out of a number of these meetings without prior notification. He stated that the reason for this was that MPs in the Kosovo-France Friendship Group at the French Assembly had asked for me to be excluded.

Naturally, I checked with members of the Group as I knew some of them from my work as head of the RFI’s Albanian Department. They confirmed that the Kosovo Embassy never put me on the National Assembly’s list to attend the meeting, and I soon learned that my exclusion was due to my outspoken opposition against the notion of a territorial exchange between Kosovo and Serbia.

After being blocked from these meetings, I informed former Minister Behgjet Pacolli of my concerns in the presence of Ambassador Gashi. Throughout my whole career, I have never seen an ambassador who utters such bare-faced lies and puts the responsibility for his actions on to elected officials.

Pacolli told BIRN in May that the government’s position on the matter was clear: “Kosovo’s territorial integrity was non-negotiable in the dialogue with Serbia.” The truth, however, is that the official position wasn’t clear at all.

It is true that the minister appointed me to lead a project that was openly against the exchange of territories, but he failed to override the decision of his diplomat in Paris – who was selected as ambassador by the PDK-LDK coalition government in 2016, when President Thaci was serving as foreign minister.

It soon became clear that all of the decisions regarding the MFA delegation’s trip to France were taken by the president and enacted by his ambassador in Paris. It is just one of a number of instances I witnessed where the MFA was subservient to the president.

It is good that the former Minister of European Integration no longer has a public position, having failed to win enough votes to become an MP, otherwise I would call for her resignation over this scandal.

Gashi on the other hand, Kosovo’s Ambassador to France, should resign immediately as it is an embarrassment for him to represent Kosovo after it has been revealed that he lobbied for changes to his country’s borders.

In 2020, it is unacceptable that the Kosovo Ambassador to Paris has actively worked to promote “territorial modifications” instead of working to defend the integrity of his country, while his actions also leave him open to blackmail, potentially harming the country’s interests.

Resigning following a scandal needs to become the norm in Kosovo politics, or the country’s political reputation will continue to worsen.

Had Thaci been forced to resign after the publication of Dick Marty’s report in 2010, we would not have experienced the madness of a state that promotes the ceding of its own territory and a president who can be accused of war crimes and crimes against humanity.

Kosovo’s legal system should currently be handling an investigation into all officials implicated in lobbying for border changes, including the Kosovo President, not a lawsuit against the investigation that revealed it.

Investigative journalism is a powerful tool that democratic forces can harness to unmask the political class in Kosovo holding the country hostage. It needs to be supported courageously.

Journalists’ associations, civil society and intellectuals must react in support of Jeta Xharra, BIRN and Prishtina Insight, to ensure that they can operate without interference and serve the public interest without fear of intimidation.

Klara Buda is a French Albanian journalist and writer. She is former head of the Albanian Department of Radio France Internationale (RFI) and since 2000 has been the president of Diagonale Franco-Albanaise. She has worked for UNESCO and the BBC and also writes prose, poetry, fiction and screenplays.