The smell is not the only problem caused by a lack of proper sewage systems in parts of Kosovo. There are environmental, health and economic consequences too.

From a distance, the village of Cernica in southeastern Kosovo resembles a postcard or a picture that might hang on the wall of a downtown apartment. The reality, however, is not so idyllic.

Behind the mosque runs a river that effectively serves as an open sewer, carrying away waste water from houses in Cernica and surrounding villages.

Locals say 100 metres of pipeline were recently laid with European Union funds, enough for a dozen of the hundreds of houses in the area. But the project is just a drop in the ocean when it comes to addressing the lack of proper sewage systems in many parts of Kosovo, including the capital, Pristina.

“As children we would wash the sponges we used to wipe the chalk from the blackboard in the river,” recalled Cernica resident Nexhmedin Miftari.

“Before the war there wasn’t so much need for sewage plants and people mainly used septic holes. But after the war, due to new construction, different types of sewage pipes were introduced, without proper infrastructure, and all the wastewater is discharged into the river.”

According to a 2020 report by the Kosovo Democratic Institute, KDI, 90 per cent of wastewater in Kosovo is directly or indirectly discharged into rivers without proper filtration. In the three years up to June 2020, 32 million euros were earmarked for sewage filtration, but only 2.2 million euros was actually spent. 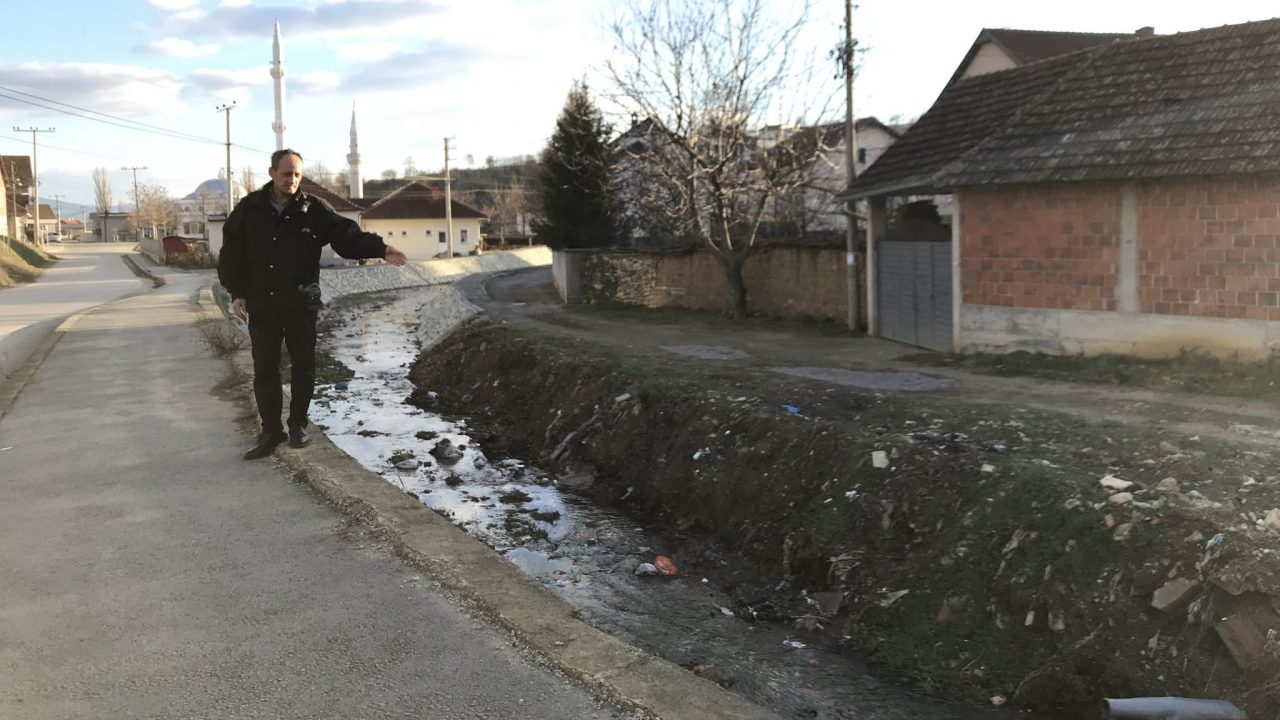 Nexhmedin Miftari showing the wastewater being discharged in the river without proper filtration implants in Cernica. Photo: BIRN

The EU-funded project in Cernica brought some “relief”, said resident Agron Sherifi. “It was embarrassing to have your wastewater right there in your neighbour’s backyard,” he said, gesturing to his cousin, who laughed.

The KDI report identified the open-air discharge of wastewater as one of the main causes of infections and pollution in the country, accounting for “bacteria, mushrooms, parasites, and viruses that could cause infections of intestines, lungs… diarrhoea, fever, cramps, and sometimes vomiting, headache, weakness and loss of appetite,” said KDI’s Diana Metushi Krasniqi.

“Some of the bacteria and diseases carried in wastewater include Escherichia Coli, typhoid fever, salmonella, and cholera.” Cases of acute diarrhoea rose 50 per cent between 2015 and 2017, for example. 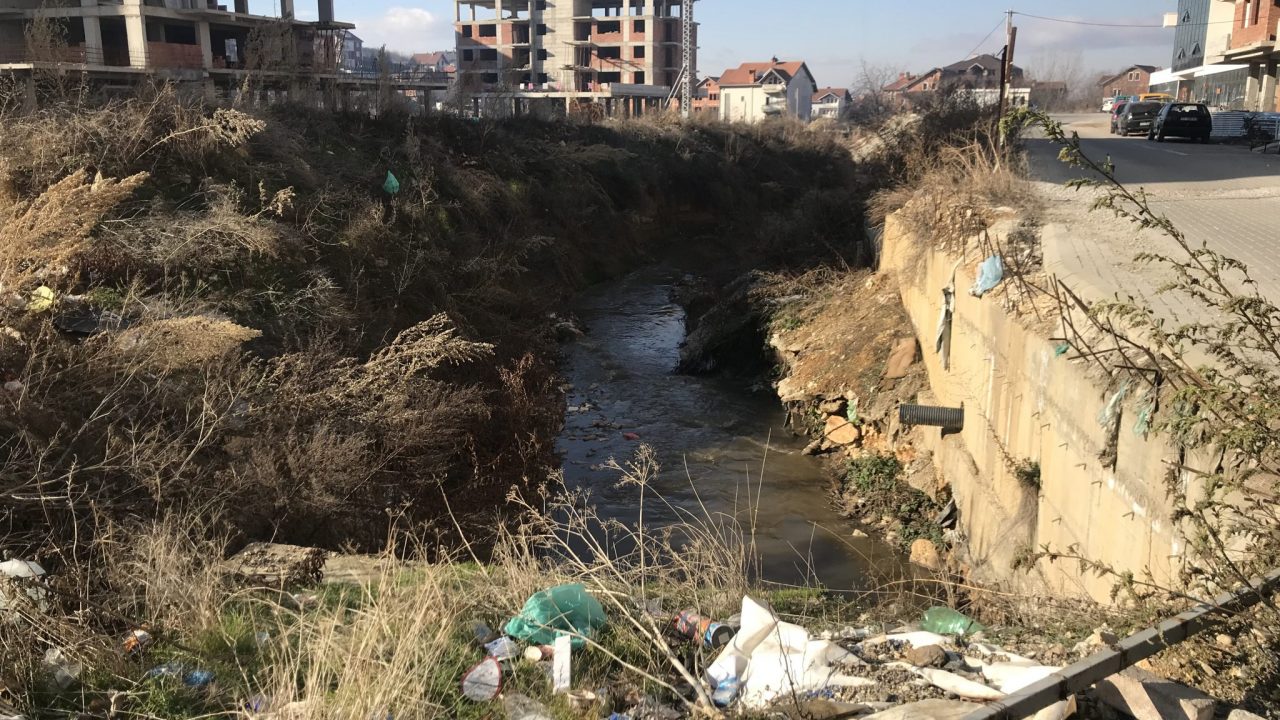 The wastewater collector without proper filtrating implants in the Emshir neighborhood in Pristina. Photo: BIRN

The Kosovo Water Services Regulatory Authority, ARRU, told BIRN that seven firms are licenced to offer water services across Kosovo, but as of 2020, sewage services in 965 of 1,301 settlements in the country are not handled by any of those seven. These include Cernica and more than 40 other settlements in the wider Gjilan/Gnjilane municipality, which did not respond to a request for comment.

“This does not mean these settlements do not have sewage systems,” ARRU told BIRN, but simply that sewage there is not managed by one of the seven licenced firms. ARRU does not have “detailed information concerning the condition of such systems, it said.

Several neighbourhoods of Pristina fall into this category.

“We have a lot of trouble due to this, especially in the summer when it smells really bad,” said Mehreme Gashi, a resident of the Emshir neighbourhood not far from the Pristina bus station where wastewater is discharged in the open air. “We can’t even open the balcony door due to the smell in the summer.”

Complaints to the municipality have failed to fix the problem. Gashi said she avoids shopping in the neighbourhood.

At least one other neighbourhood in the capital has a similar issue, while ARRU said there are 20 settlements on the outskirts of the city where water services, including wastewater management, are not covered by any of the seven licenced firms.

Neither Pristina municipality nor Kosovo’s National Institute of Public Health responded to requests for comment. 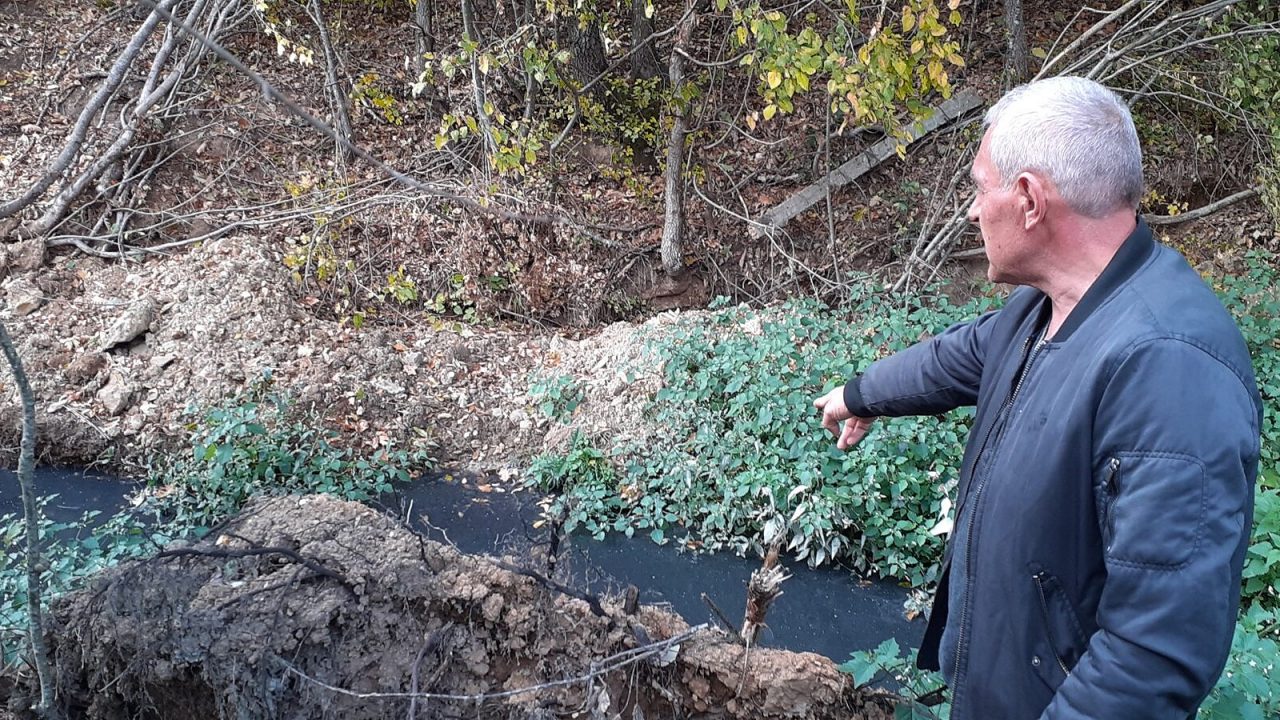 Sylejman Bujari showing the wastewater being discharged openly, without a proper sewage system, in his property. Photo: BIRN/Rrahman Ramaj

Some households end up improvising septic holes. Others simply discharge their waste into rivers, with consequences for the environment, agriculture and the local population.

“Wastewater discharged in untreated ways in rivers directly risks the soil composition and the quality of the agricultural products,” said Metushi Krasniqi from KDI.

In the village of Duhel/Dulje, part of the south-central municipality of Suhareka/Suva Reka, Sylejman Bujari says he is unable to farm five hectares of land due to the damage caused by wastewater.

The village is one of 23 locations in the Suhareka/Suva Reka municipality not covered by any of the seven licenced firms, ARRU told BIRN. The municipality did not respond to a request for comment.

“All the wastewater of the village is discharged into my property,” Bujari said. “I can’t work due to the smell and wastewater. I can’t take proper care of the trees planted there or anything else”.

Competition Opens for new boss of Radio Television of Kosovo

Kosovo Goes Ahead With Electricity Price Hike, Despite Protests