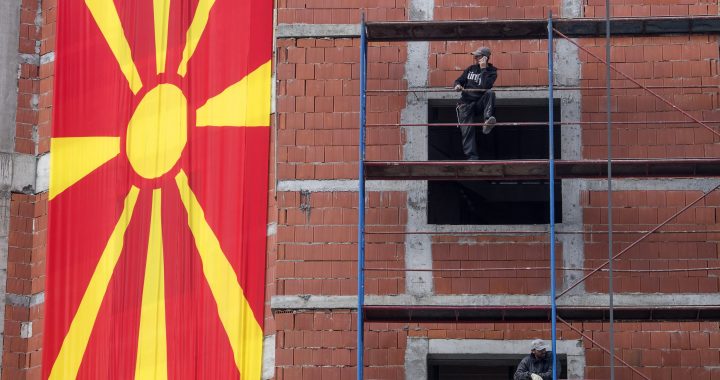 Power and corruption in Macedonia, or how to ruin a country

A thirst for power is the driving force behind the revival of ethnic tensions in Macedonia, but only the corrupt political elites stand to gain from the nation going down in flames.

Utterly reactionary voices are appearing in and out of Macedonia, calling for the arrangement of various political actors along an axis of a supposed Macedonian-Albanian conflict.  While Macedonia was a great example of social mobilization over the last three years — with mobilizations that went beyond the traditional lines of ethnic demarcations — one is surprised to see how the long-drawn-out crisis is unfolding in ethnic tensions.

Inevitably we have to pose the question: where did this come from?

Many claim that the recent ethnic alienation came out of the blue simply because it is in contradiction to the social processes of mobilization we’ve recently experienced. One can also claim that it is an orchestrated play by the corrupt ex-coalition partners in order to obscure grave abuses of state funds and institutions in the name of a higher cause – ethnic interests.

But, there is another reading that we can make of the context that led to the recent deepening of the crisis and a general increase in nationalist rhetoric among various social actors.

After the 2001 conflict and the subsequent Ohrid Agreement implementation process, Macedonia functioned through a model of ethnic power-sharing. The largest Macedonian party and the largest Albanian party would always form a coalition as winners of the two virtual parallel ethnopolitical camps. This power-sharing arrangement enabled a transfer of criticism to the other ethnic party for any setbacks that citizens would hold the government responsible for.

In such a ping-pong game of blaming the coalition partner and remaining entrenched in their ethnopolitical nests, the political parties Internal Macedonian Revolutionary Organization – Democratic Party for Macedonian National Unity, VMRO-DPMNE, and the Democratic Union for Integration, BDI, were able to govern, remaining largely unchallenged for a whole decade.

The long bittersweet marriage of the two parties came to an end when the massive corruption schemes that the Gruevski government had indulged in were revealed. After the internationally brokered agreement of June-July 2015–which was supposed to open a path towards a solution to the political crisis–came the elections of December 2016, which did not provide a clear-cut majority to any political party.

What we are witnessing today is an attempt to reinstate ethnicity as the main political pillar of the whole society. This is happening as a result of a significant shift among the Albanian voters, who broke away from the traditional ethnic political parties by supporting the social-democrats. The Social Democratic Union of Macedonia, SDSM, had already opened a door for the Albanian electorate by putting several Albanians on their electoral lists. The result of the elections was one that signaled a definitive break with the model of ethnic power-sharing. The two largest ethnic Macedonian and Albanian parties, VMRO-DPMNE and BDI, were the biggest losers of the breakup of the power-sharing model.

Relying on its traditionally conservative and nationalist discourse,VMRO-DPMNE cannot compete outside its comfort zone, which until now was composed of Macedonian-only votes. These no longer decide the outcome of the election in the ‘Macedonian camp.’ Now Albanian votes are the ones that determine the winner, though the result of the elections gave advantage to Gruevski’s party by only two MPs.

On the other hand, Ahmeti lost his exclusivity as the only Albanian actor in the power relations with the Macedonian side. A recent poll by Telma TV shows a significant increase in SDSM support among Albanians in the post electoral period, propelling it to the first place among Albanian voters in the country. Faced with such a shift, both Gruevski and Ahmeti attempted to make a government on the basis of the old model, but failed.

If that would have happened, Ahmeti would look like the protector of Gruevski’s corruptive decade-long rule, and thus lose even more support among the Albanians, who have traditionally seen Gruevski as an anti-Albanian, corrupt, and repressive prime minister. Therefore, fearing more break-away votes, and under pressure from his own party members, he was forced to withdraw his support for Gruevski. This is how the model of ethnic power-sharing came to an end: a shift in the Albanian voter base put Ahmeti on an offside position.

In an attempt to rehabilitate his position as the main power-holder among the Albanians, Ahmeti embarked on a platform, which besides a few realistic demands, is nationalist at its core. As it is, the platform leaves no other choice for both VMRO-DPMNE and SDSM but to refuse it. This would make both parties seem as if they have an identical position towards Albanians (although, as mentioned above, this is not so), and would result in the return of Albanian voters back to “their” ethnic camp. Thus, Ahmeti would have an easier time recruiting their support.

The Platform, which was a deal among Albanian party leaders incorporating all of their electoral programs, and which became the main bargaining document for Ahmeti, has all the elements of an unelaborated, swiftly drafted paper to be used as a game-changer for the Albanian camp.

But this strategy backfired. Even if he would gain some concessions from Zaev, the leader of the opposition, the nationalist mobilization that Gruevski has generated against the ‘Albanian Platform’ complicated the political terrain. Now, any agreement that BDI and Social-Democrats could reach would only contribute to more tensions and reduce the possibility for a meaningful political dialogue.

Power, which by definition does not hold any ethnic label, has been so much of an entertaining ‘drug’ for the corrupt elites, that their thirst for it does not run out even at the threat of ethnic tensions and possible destabilization of this country in the heart of the Balkans.

It is beyond any discussion that the elevation and expansion of the use of Albanian language does contribute to equality in the country and in no way threatens its unity, but the way and the timing in which it has been put forward, coupled with the easily-read political scheming behind such a move, undermines its very possibility of becoming a reality.

Furthermore, putting forward a demand for Albanian language to become an official language would not be so problematic if it were the only demand of ‘the Albanian Platform.’ But, the document lists several irrational demands, such as a demand for “resolutions on the genocide towards Albanians.” This clearly indicates a “smart” strategy: the platform is supposed to be rejected (as it currently is) and political benefits will be reaped from society going down in nationalist flames.

The president’s rejection to give the mandate to the opposition leader Zaev, on the grounds of the danger that negotiating with such a platform poses to the constitutional order of the country, is one of the many irrational and unconstitutional events we might witness these days. Do not doubt that this too is grounded on the same thirst for power.

Even more so when it is only this tight grip that can save the current elite, which has depleted Macedonia’s institutions of their democratic legitimacy; has drained the state budget funds through a series of corrupt deals (the Skopje 2014 project bill has now reached almost 700 million euros); and has enforced a repressive legislation that has enacted one of the worst models of state capture in Europe today.

Moving forward will only be possible through policies of de-escalation among the different lines of polarizations (party-political, ethnic, et cetera) and through a removal of the current elite for good from the country’s political scene.