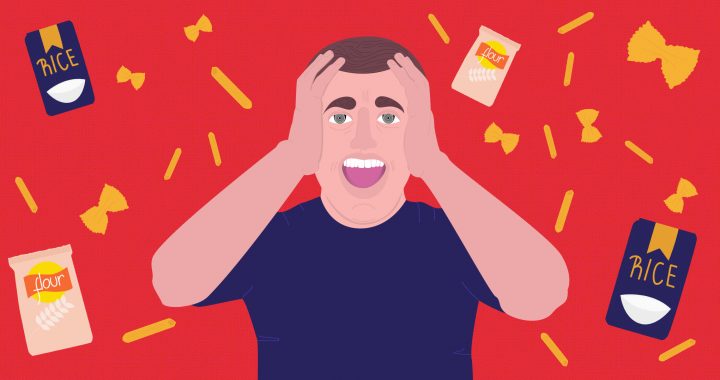 As well as containing the virus, it is important to tackle the mental stresses and strains of a pandemic, including retaining a sense of self-control.

When COVID-19 first emerged in the province of Wuhan, China, not many citizens of Kosovo were worried that it would come knocking on their door. It was just another item at the end of the seven o’clock news, mixed in with other international stories.

However, following COVID-19’s spread to Europe, Kosovo’s first two confirmed cases were announced on Friday night. Fear of the virus came even earlier, with the high number of recorded deaths in Italy and the spread of the coronavirus to Albania prompting Kosovo residents to start taking measures and try to protect themselves.

The situation is understandable to a degree: Being prepared for quarantine is very smart. However, buying in excess and stockpiling food items is not the wisest move.

Pictures and videos of shelves in supermarkets being emptied out in many cities in Kosovo have recently been shared across social media and by local news. What began with a panicked frenzy of acquiring protective face masks and hand sanitizer quickly accelerated into hoarding pasta, oil, rice and flour.

It is not a phenomenon restricted only to Kosovo. Tweets with hashtags like #toiletpaperpanic, #coronapocalpyse and many others have shown people all over the world taking extravagant measures that they deem necessary to potentially survive in quarantine.

Reports in the UK show that consumers are accumulating large quantities of food and toilet paper, while the same is behaviour is being mirrored in the US and Germany, where stores are being emptied of essentials. In Hong Kong, armed robbers have even begun stealing toilet paper.

Pandemics like COVID-19 are often highly publicized across the media, which can exacerbate panic and high levels of anxiety amongst the public. The same behavior we see now was witnessed during the ‘swine flu’ outbreak that emerged in the spring of 2009. At the time, the flu strain was compared to the Spanish flu, which affected at least 500 million people worldwide at the beginning of the 20th century.

The lesson learned then was that to control a pandemic, panic also needs to be brought under control. Downplaying the danger of a virus can be deadly – but fear is contagious too.

So what exactly is going on? Why are we stockpiling when government officials all over the world are telling us not to panic buy? Psychologists have issued a range of explanations, including having and maintaining a sense of control, fearing the unknown, and the need for security and comfort in a stressful situation.

Retaining a sense of control can be very hard when others around you are panicking. Whenever there are pandemics or epidemics, an individual’s sense of anxiety is shown to rise, while objective reasoning can become hindered and obstructed.

The natural response is often to look at what other people are doing and mimic their behaviour. If a person sees empty shelves of rice in a store, they may set aside rational thought and instinctually mimic that  behaviour, grabbing that last bag of rice before someone else does.

The need for security and comfort in a stressful situation is another instinct in times of panic. If there are things that we can do to make sure that we feel safe, undoubtedly, we are going to act on it. If our community dictates that feeling safe equates to stockpiling rice and pasta, we are going to do just that.

A disease outbreak is a stressful experience, and the way that countries respond plays a role in shaping individual responses to the Covid-19 outbreak. Given the intensity of symptoms and the uncertainty of how widespread it is in Kosovo, the extent of the stress that this can and already has caused is high, yet still unquantifiable.

Scholars have suggested that people engage in either ‘fear control’ or ‘danger control’ depending on the level of fear they experience. That means when fear is low, people will engage in preventive behaviours.

However, when fear is high, individuals may disregard or ignore health warnings issued by governments and public health institutions. In keeping with the stress model, future contamination can be seen as a psychological strain – meaning that individuals who are worried about contracting a similar disease can experience impaired mental health.

It’s very hard not to think about how pandemics have been represented in popular culture in these times of crisis. Quarantine can do that to a person. Last week, my social media channels were bombarded couples hugging each other and referencing ‘Love in the Time of Cholera,’ while Camus’ ‘The Plague’ is a book that readily comes to mind in times of panic and fear.

But nothing captures the mayhem and panic that ensues with infectious diseases as well as modern films and TV shows, including the first season of ‘The Walking Dead’ in which scenes of looting and emptied out stores are a frequent occurrence.

The kind of mayhem that can ensue in the face of a pandemic are also reflected in scenes in films such as 2011’s ‘Contagion’ and ‘World War Z’. This is not because the world is going to be suffering from a zombie outbreak in the near future, but rather because of the real-world consequences hoarding items can cause.

Hoarding can drive up prices and takes crucial necessities out of the hands of the people who need them the most. After all, we must ask ourselves: what will I do with 20 bottles of hand sanitizer if I’m not infected, but the person queueing behind me in the store is infected and unable to disinfect their hands?

Eurisa Rukovci is the executive director of the Social Lab NGO, as well as the co-creator of ‘Shnet,’ the first sexual health application in Kosovo, and author of the feminist comic book ‘Hyjnesha.’ She completed her studies at the Department of Psychology at the University of Prishtina.