The prickly job of being Tirana’s mayor

Erion Veliaj spoke to PI about his “acupuncture” approach to fixing Albania’s capital and his controversial fight against the usurpation of public space.

Shortly after winning a highly contested election in June 2015, Erion Veliaj realized that the schoolchildren in his city Tirana had a problem: collectively, they were skipping 33,000 hours of school each week, missing the first hour of classes because they were stuck in traffic. The most common culprit? Food delivery trucks blocking the roads.

“It was chaos,” he told PI during an official trip to Prishtina last week. “They come with a truck, they want to deliver food, and they hold up traffic.”

Veliaj issued an ordinance banning the food delivery by truck from 7:00am to 9:00 am despite protests from businessmen.

“I said, ‘Wait a minute, this is a question of values.’ Are 100,000 kids missing the first hour of class more important than a thousand chewing gum trucks? It’s a small detail of a million other things, but just a small thing to illustrate that we’re out of space, and the best thing we can do is take turns using it.”

By the time the next school year had come around, the protests against the ordinance have subsided, but detractors have been agitating against of some of Veliaj’s other initiatives to forcibly remove Roma families and build a lake-side development of recreational facilities. 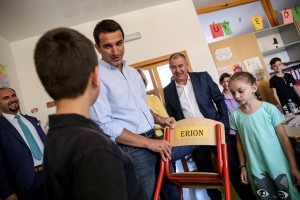 Veliaj during his visit to Prishtina’s “Model” school. | Photo courtesy of the Prishtina Municipality.

The idea to ban trucks during morning commutes originated from Veliaj’s push to make the city administration more data-driven and more responsive to the actual needs of citizens. Jumping into the campaign only 45 days before the election, Veliaj, a civil society activist who joined Edi Rama’s Socialist Party in 2009, was then serving as Minister of Social Welfare and Youth. He and his team developed a crowd-sourced app to help amass information in order to educate themselves on community issues and micro-target his pitch to specific neighborhoods. Users submitted photos or reports on missing manholes, broken windows, overflowing rubbish bins and other things of concern along with their geographic coordinates. He credits his victory in the tight race to this approach.

Once in office, Veliaj installed traffic sensors, street cameras, and integrated the user-generated portion of the app to become Tirana Ime (My Tirana).  During his official visit, he offered the platform for free to Prishtina’s mayor Shpend Ahmeti, saying that one of the many commonalities between the two capitals is the challenge posed by the preponderance of cars. 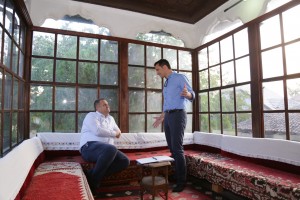 Tirana mayor Veliaj talking to Prishtina mayor Ahmeti at the Ethnographic Museum in Prishtina.|Photo courtesy of the Tirana Municipality.

Until 1990, private car ownership was banned in Albania. In today’s Tirana, a city of just under a million inhabitants, there are now 130,000 cars making some 800,000 trips a day, says Veliaj. Yet according to data collected by his team, half of these car trips are for less than a kilometer.

“Clearly this is not something to do with parking space or distances, it has to do with mentality,” says Veliaj. Tirana is becoming a hotspot for art, architecture, and cuisine. Edi Rama, who served as mayor before becoming prime minister, is known for gussying up Tirana’s drab post-communist buildings by splashing them in colorful painted patterns. Veliaj, who is also from the Socialist Party, is following in his footsteps-but by changing the buildings themselves.

“Rem Koolhaas is coming this month to to look into constructing a building,” gushes Veliaj.  “Stefano Boeri, the famous Italian architect from Bosco Verticale is doing the general plan of Tirana. And we’ve just had a huge building by Winy Maas opening up in downtown Tirana. I think for many of them it is exciting for them to have Albania on their CV, and for us it is important to put the city on the map by bringing these people to leave their mark on this city.”

But the changes are not just cosmetic, says Veliaj. Tirana residents also need to change their habits.

“Twenty-five years ago, we were literally starving and I remember the bread lines in Tirana, I was 10 or 11, and I would sit for hours waiting for the bread truck. Now our number one problem is obesity. And this is within a generation!”

“In the beginning i was getting a lot of criticism: You’re the mayor, you’re just here to put asphalt and fix the parks and put lightbulbs, not to teach people how to raise their kids,” he says. “But you gotta do both, infrastructure and culture.”

These days in Prishtina, says Veliaj, people are full of talk about the controversial border demarcation with Montenegro, with little regard for the ways daily life in the city is demarcated.

“It’s everyone’s favorite topic, who is more of a turbo patriot… I know people fret about it, that’s fine. But we need demarcation in our cities, because we are occupying public space like crazy: Occupying streets where everybody should be equal and people walk, we’re occupying pavements to put our fancy cars, we’re occupying parks to get more coffee houses and more lazy bums that sit around and just smoke all day in a place where kids should play. We need some of that demarcation, and no one says anything about that, but about probably a beautiful green pasture that no one has ever been to but it really looks cool on the pictures.”

For once I'd like to not talk about Greater Albania, but I'd rather like to think of a good Albania. Erion Veliaj

Veliaj said he wants to organize a meeting of mayors from major cities in the five Balkan countries with large Albanian populations on November 26-27, just before the Albanian independence day in November.

“I want to bring the key mayor from each of the surrounding Albanosphere, the mayors of Prishtina, Ulcinj, Tetovo, Preshevo, and for once not talk about Shqiperia e madhe [Greater Albania] , but I’d rather like to think of Shqiperia e mire [a good Albania]. In these five cities alone, a third of the Albanian population in the region lives. And if these cities worked well, you’ve done more for a third of your co-nationals than all of the populism combined.”

This mindset led him to approach London’s Serpentine Gallery along with contemporary artist Anri Sala and ask to be a second home to their installations, starting with “The Cloud,” a cumulus-like pavilion made of white poles by Japanese artist Sou Fujimoto. The area is now a popular event venue – Veliaj contends that there are 361 events planned out of the year’s 365 days.

This is part of what he calls the ‘acupuncture’ approach to fixing the city, by focusing intensely on improving key parts of the city.

“Acupuncture doesn’t massage every part of the body,” he says. “But it does touch a little nerve that can affect how the body works. And I think the city is like a human body: You acupuncture in a nerve, and then you get people all worked out around that puncture.”

His approach is not necessarily modeled on Western European cities, but focused on fostering the unique spirit of the city and on innovations coming from densely populated urban areas in South America. 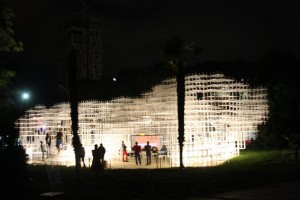 “The Cloud Pavilion” by Sou Fujimoto in Tirana. | Photo courtesy of the Tirana Municipality.

“I don’t have The Louvre, but I can have Fujimoto’s Cloud and Enver Hoxha’s bunker,” he says. “I’ve come to realize the best innovation is not coming from Europe, in my view. It’s coming from places like Bogota and Medellin, a lot of Latin American cities. They have a very similar mentality to ours—people by the sea, wanting to sip cappuccino all day, very fun loving, outdoorsy. I think a lot of the innovation these days comes from similar contexts, which is not in northern Europe. Let’s face it, Albanians will never become Calvinists.”

Not all of Veliaj’s beautification efforts have met with widespread praise. Last autumn his administration came under fire for evicting 48 Roma families who had been living on the park of Lake Tirana, in the middle of the capital’s most expensive residential neighborhood. Under the plan, the families whose domicile was in Tirana were offered temporary housing, while those who were technically registered in other municipalities were eligible only for free transportation outside of the city limits.

This plan was criticised by the Council of Europe and other human rights watchdogs. In February, Veliaj’s cabinet began construction work for a new children’s park next to the lake in Tirana, one of the few remaining green spaces in the city. Members of environmental organisations and opposition parties camped out at the park for 78 days to protest the construction, often coming to blows with the police. A BIRN investigation revealed that the contract had been awarded without a competitive bid, and involved the construction of recreational facilities including, a horse track, football and basketball fields and a club.

More recently, Veliaj’s administration has been criticized in the wake of the death of 17-year old Ardit Gjoklaj, who was an unregistered night-shift worker at the city’s overflowing dump. In an attempt to stop the informal recycling and dumpster diving prevalent in Tirana, in March Veliaj visited the dump in Sharra informing that informal waste-pickers, mostly Roma people, would be able to work in the landfill, getting a job that would be in agreement with all laws and regulations. The opposing Democratic Party protested after the youth’s death and requested that Veliaj step down.

Veliaj contends that the tragic death is being utilized for political gain, insisting that the municipality does not manage the landfill directly and that the matter will be fully investigated. The landfill’s administrator is currently on the run.

“Obviously they [the dump managers] violated the labour code, “ Veliaj explains. “Let’s have this investigation go through. I have a hundred working sites momentarily in Tirana. On any of the bridges in any of the boulevards, in any of the ravines that we’re fixing in the rural areas, there could be an accident. If you go into this game of playing a political hyena that everyone in these working sites is directly linked to the mayor, who’s procuring the job, that simply doesn’t work.” 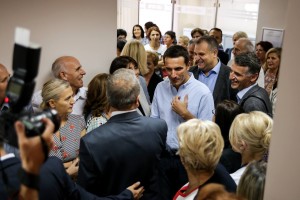 Veliaj during his official visit to Prishtina. | Photo courtesy of the Prishtina Municipality.

Similar to Rama, whose mayoral legacy remains the colorful painting of the city’s crumbling façades, Veliaj is resolute in his own vision of a more orderly city.

“I know there must be people who really wanna live under the Skanderbeg statue [in the center of Tirana], but it simply cannot happen,” he says.”But I know there is a way to do both; I don’t have to choose between housing people or having a free city or open space.”

The mayor accepts that choices he makes trying to reclaim public space in Tirana will be criticized, but says he is undeterred by them, because he knows it will also gain him supporters.

“If you destroy someone’s [illegally built] garage where he kept his fancy Mercedes, he’s gonna hate you, but if you free the playground, another 100 people are going to love you.”

Shanti Yoga Fest to make asanas accessible for everyone