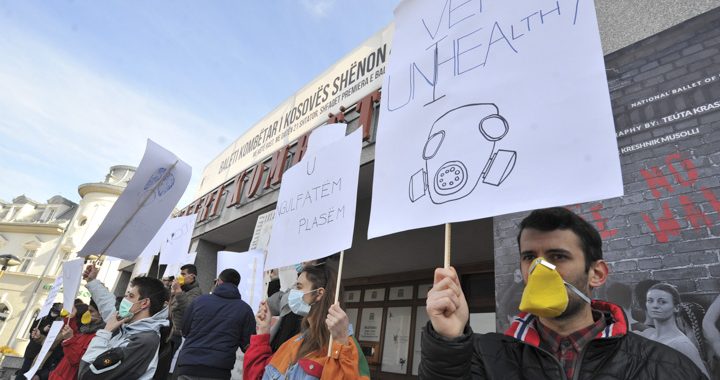 A protest in Prishtina against air pollution in January 2019. Photo: Atdhe Mulla.

In protest against inaction on climate change, cities around the world have organized the Global Climate Strike. On Friday at 12:00, demonstrators in Prishtina will join the movement, inviting participants to show their support for taking action to prevent irreversible global warming.

Prishtina will host a strike on Friday, September 20, joining cities in more than 150 countries around the world as part of a global protest against inaction on climate change.

The demonstration is organized by the Termokiss community center and GAIA Kosovo, an NGO specializing in social and environmental justice, which aims to raise awareness for the support of reducing the harmful effects of global warming and climate change. Protesters will gather at 11:00 at the Termokiss building, before moving to Zahir Pajaziti Square at 12:00.

“On this day, people from around the whole world will unite to strike against climate change… the Earth will reach levels of warmth that will be irreversible, if we don’t act now,” reads a statement on the Prishtina strike’s Facebook event. “The momentum is now to act and to let institutions know that the younger generation will not stand for this. It is our future!”

Representatives from Termokiss highlighted some of the biggest polluters that they hope to raise awareness of, including Kosovo’s two old and malfunctioning coal-fired power plants.

“Here in Kosovo, we face multiple problems when it comes to the environment. Since in Prishtina we have an exceptional view of Kosova A and Kosova B, we are fully aware of what we are breathing. In the wintertime we are reminded of it because the only possible way to breathe sometimes seems to be through a mask.”

Organizers also highlighted the illegal construction of hydro power plants in Kosovo’s national parks, the pollution of farmable land, and the plans for the construction of the new ‘Kosova e Re’ coal-fired power plant that is foreseen to take over the capacities of Kosova A once it is shut down.

The government has received criticism for supporting the construction of the new power plant, especially following the World Bank’s withdrawal of support for building more fossil-fueled based power plants. In October 2018, the World Bank announced that it is now more cost effective for Kosovo to invest in renewable energy.

GAIA also expressed their support for the strike. “We have to unite for the climate, and show the decision makers that we do not agree with the policies that are damaging our environment! It is our future, so let’s stand up for it,” said GAIA Kosovo on their Facebook page. “Millions of us will walk out of our workplaces and homes to join young climate strikers on the streets and demand an end to the age of fossil fuels. Our house is on fire — let’s act like it. We demand climate justice for everyone.”

The figurehead of the Global Climate Strike is Greta Thunberg, a 16-year-old Swedish environmental activist, who rose to fame after she inspired the organization of elementary and high school strikes for climate across the world in 2018 by skipping school to protest outside the Swedish parliament.

“We are the younger generation, we are the ones who are going to be affected. Therefore, we demand justice,” said Thunberg on the Global Climate Strike website. “Everyone should mobilize for the 20th and 27th of September because this is a global issue that affects everyone. We are all in the same boat, so everyone should be concerned about this.”

On Wednesday, Thunberg testified before the United States Congress, submitting a UN report on global warming to Congress instead of a personal testimony. “I want you to listen to the scientists. And I want you to unite behind the science. And then I want you to take real action,” she said.

According to the UN report, global warming has already reached 1 degree celsius since the time of pre-industrialization. Global warming rates have increased to an estimated 0.2 degrees per decade, and warming is likely to reach 1.5 degrees celsius between 2030 and 2052 if it continues to increase at the current rate.

The report stresses the importance of acting now before global warming exceeds 1.5 degrees: it is crucial that global warming stabilizes gradually, as if it reaches more than 2, the impacts will be long-lasting and irreversible, with the loss of whole ecosystems highly likely.

Organizers of the strike state that over 6,000 websites and companies are joining the strike digitally in response to the call to action.

Thunberg has encouraged people of all ages and backgrounds to stand together to support reducing harm to the environment. “This shouldn’t be the children’s responsibility. Now it’s time for the adults to stand up and help us,” she said. “We are calling on them to strike from their work because there is nothing we can’t do. If it is not you that should do it, then who else? If not now, when?”

Kosovo’s capital has become notorious for its air pollution, particularly in the winter months due to higher levels of coal consumption and the geographical location of Prishtina, resulting in ‘temperature inversion,’ trapping harmful air inside the city. In December 2018 and January 2019, Prishtina peaked as having the most polluted air in the world on several occasions.

Prishtina’s inhabitants have protested the high levels of air pollution in the city before, urging the Kosovo Government to make reducing harmful emissions a priority. In response, the Municipality of Prishtina has taken a number of short-term measures, such as banning cars from driving in the city center and banning the burning of coal in public buildings.

Prishtina’s Global Climate Strike will begin at 11:00 at Termokiss and 12:00 at Zahir Pajaziti Square. For more information, visit the Facebook event page.