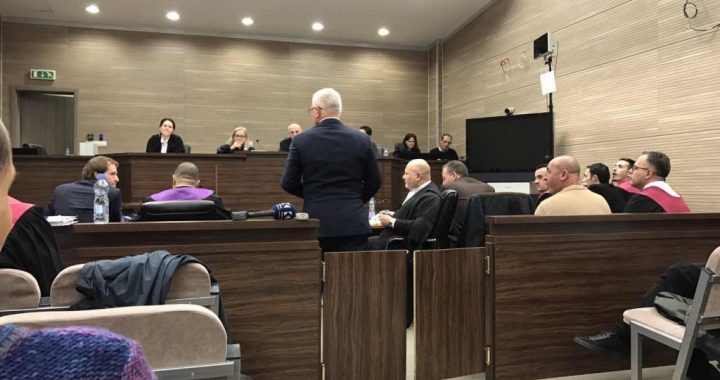 Former and current public officials face nepotism charges at the Prishtina Basic Court on Thursday based on evidence leaked through wiretaps in 2016.

Over two years after the controversial wiretaps between Democratic Party of Kosovo, PDK, officials were leaked to the Kosovo public, former PDK MP Adem Grabovci and 11 other individuals accused in the ‘Pronto’ case will be tried for alleged unlawful appointment of party members to key state agencies and institutions.

During the initial session on Thursday morning, all of the accused pleaded not guilty.

Prosecutor Drita Hajdari confirmed for Prishtina Insight that Shasivar Hoti, the judge overseeing the case, did not allow the indictment to be read out loud in the courtroom, which means that the public has not heard the exact charges made against the accused.

“I was not allowed to read my indictment in court, which is highly unusual. This is clearly being done in order for the public not to hear what the accused are being accused of,” Hajdari said.

In April, the Kosovo Special Prosecution indicted 12 individuals for case, some of which still hold public office in Kosovo. Apart from Grabovci, a number of former independent agency officials, and ministry employees, the prosecution also indicted current Minister of Innovation and Entrepreneurship Besim Beqaj, and current PDK MP Zenun Pajaziti.

The first session of the trial was supposed to be held in October, but it was postponed due to the absence of Grabovci in the courtroom.

The accused face charges of “violating equal status of citizens and residents of the Republic of Kosovo” according to Article 193 paragraph 4 of the Kosovo Criminal Code, which means that, if found guilty, they could face between 6 months and 5 years in prison. Some of the acts within the case will also be tried as attempted criminal acts.

According to the indictment, the accused have abused public office by cooperating between themselves to illegally privilege and favor individuals that applied for important public service positions, such as: director of central public enterprises, executive chief of the Registration Agency under the Interior Ministry, chief of the Agency for Medicinal Products and coordinator of the Center for Civil Registration in Klina, denying and limiting guaranteed rights and freedoms of other candidates.

The indictment focuses on the criminal aspect of appointments and delegation of roles based on party affiliation and personal relationships, an issue that has alarmed Kosovo citizens, law enforcement institutions and the media in Kosovo for a long time.

Not long after the wiretaps were leaked by local media outlets in 2016, Grabovci said that “it’s not a crime to hire people.”

Following three anti-corruption protests held in Prishtina in August 2016 based on the ‘Pronto’ affair, Grabovci resigned from his position of PDK parliamentary group chief, saying that he did so “for the purpose of a moral and political reaction, as well as for the purpose of creating the possibilities for this case to be treated legally.”

Grabovci remained MP for almost another year, then did not run for another term in the June 2017 parliamentary elections.

The recordings used as the basis for the indictment are wiretaps leaked from a EULEX investigation on Grabovci during his stint as Deputy Minister of Transport and Telecommunications between 2008-2011.

Hajdari will speak about the challenges of this case, and other cases she is dealing with, for the first time on BIRN’s program Jeta ne Kosove on Thursday at 20:15.