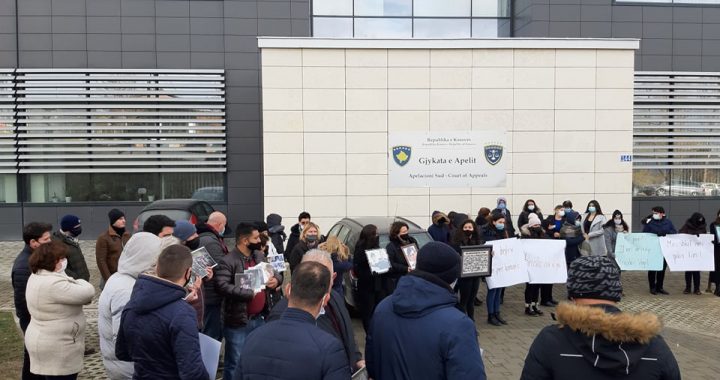 Demonstrators gathered outside the Palace of Justice on Thursday to protest against the Court of Appeals’ decision to halve the prison sentence of Darko Tasic, who in June was convicted of war crimes for his role in the Krusha e Madhe massacre.

Demonstrations were held outside the Palace of Justice in Prishtina on Thursday, in protest at the Court of Appeals’ decision to cut the prison sentence of Darko Tasic from 22 years imprisonment to 11.

Tasic, a former police reservist, was convicted of war crimes in June by the Basic Court of Prizren for his involvement in the massacre of Krusha e Madhe in March 1999.

Emira Duraku, who lost her father and four brothers to the massacre, all of whom remain missing, told Prishtina Insight that she was astonished at the decision to halve Tasic’s sentence.

“All these years have passed and there is no justice,” Duraku said. “Our appeal court does not come to talk to us for five minutes to explain something that in reality is unexplainable.”

Many citizens joined the protest to show solidarity with the people of Krusha, including Fadil Berisha, a 52-year-old citizen from Prizren. Berisha told Prishtina Insight that the demonstration was an opportunity to speak out about 20 years of injustice, and the failure to bring justice for war crimes committed in the Kosovo war.

“It is not only a failure of the international community but also local courts,” Berisha said. “The minimum sentence should be a life sentence. Darko was not sentenced for a minor crime but a crime against humanity. No other sentence is justified and any deviation from this is a denial of justice.”

It is estimated that 105 Kosovo Albanian males aged between 13 and 72 were killed in the massacre of Krusha e Madhe on March 26, 1999, after Serbian forces machine-gunned 109 people in a barn in the village.

Darko Tasic was accused by the Kosovo Prosecution of burning many of the bodies, and disposing of them in a nearby river, as well as looting and burning property. On June 22, 2020, the Basic Court of Prizren found Tasic guilty of war crimes and sentenced him to 22 years in prison. The defence filed an appeal against the judgement, claiming that it did not contain decisive facts on the reasons given.

On Wednesday, the Court of Appeals found that the actions of the accused contained all the elements of the criminal offense of war crimes against the civilian population, but revised the sentence to 11 years.

Minister of Justice Selim Selimi praised the Kosovo judicial system for its sentencing of Tasic in June, stating that it shows Kosovo’s commitment to bringing war criminals to justice. Prishtina Insight contacted Selimi for comment on the Court of Appeals’ decision to reduce Tasic’s sentence but received no response.