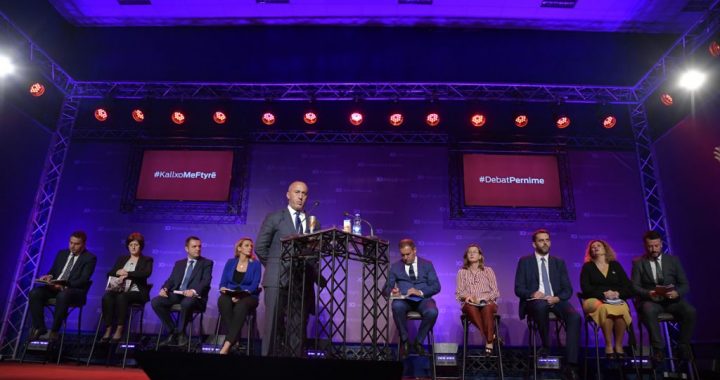 Ramush Haradinaj with his in team in #Debatforrreal. Photo: Atdhe Mulla.

As part of a series of debates with the prime ministerial candidates on BIRN’s televised program Jeta ne Kosove, Ramush Haradinaj of AAK-PSD discussed the coalition’s policy plans and promises for the next administration alongside a team of candidates vying for seats in the Kosovo assembly.

On Friday night, Ramush Haradinaj, the candidate for prime minister from the coalition between the Alliance for the Future of Kosovo, AAK, and the Social Democratic Party, PSD, outlined his plans for the economy, security, education, and the judiciary, revealing his top priorities if his coalition would form the government.

October’s snap elections were triggered after Haradinaj resigned in July due to being summoned for questioning by the Specialist Chambers in The Hague, stating that he could not be Kosovo’s prime minister and a suspect at the same time. Asked about whether he would step down again if the Specialist Chambers summoned him for a second time, the former Kosovo Liberation Army commander replied: “Even if they call me 100 times, I will resign 100 times.”

The previous coalition government led by Haradinaj was criticized for having more than 80 deputy ministers, a record in Kosovo’s contemporary history. The number of ministries also increased to a record high of 21.

While many of his rivals have pledged to reduce the expenses of the government by cutting the number of both ministries and deputy ministers, Haradinaj seemed reticent to commit to such a promise. “It is not easy to bring Kosovo to 15 ministries,” he said.

Earlier this week, Besnik Tahiri, a candidate for MP from the coalition proposed that an AAK-PSD government should be comprised of 15 ministries, a proposal he repeated support for at the debate, with Haradinaj visibly expressing his disagreement behind him.

While Haradinaj seems reluctant to reduce the number of ministries, he is keen to increase the amount of women employed in the executive, promising that one third of his next government would be made up of women.

The AAK-PSD candidate outlined the three pillars that he believes would boost the Kosovo economy, the first of which is improving the collection of taxes. However, Haradinaj did not elaborate on the exact details of how tax revenue can be increased, only that better tax collection was a cornerstone of economic development.

The second pillar comprises giving public land to businesses to enhance their productivity, equipping these ‘industrial zones’ with sewers, electricity and other facilities. The third pillar meanwhile is built on the relationship between the government and the private sector, and the need to decrease bureaucracy for those in business. “We need to go with more efficiency and remove all those bureaucratic elements that can create corruption,” Haradinaj stated.

In terms of spending, the former prime minister appears to remain committed to investing in infrastructure, specifically constructing the 91 kilometer Dukagjini highway which will connect Istog with Prizren. Outgoing minister of infrastructure, Pal Lekaj, has previously stated that the project is estimated to cost around 1 billion euros, though Haradinaj contests this figure.

The announcement of the project received a large backlash, with critics arguing that Kosovo now has other priorities after public spending over the last decade was dominated by the construction of two motorways. All political parties outside of Haradinaj’s AAK, including their coalition partners PSD, have expressed reservations about the economic benefits of spending another billion euros on asphalt.

The former prime minister was questioned about the highway, and asked why its construction was a priority when renovating the existing road is estimated to cost just 150 million euros. Haradinaj answered that both options can be delivered. “It is impossible that we won’t widen the existing roads, but the highway is another project,” he said.

The former prime minister however accepted criticism aimed at the previous government for their record on nepotistic employment. “Look, you are right, there are some recruitments that do not look like they were made on the basis of professional criteria or school [qualifications]. I don’t deny this,” he said.

Haradinaj pointed out that the former director of Kosovo Post, Sejdi Hoxha, who resigned after being embroiled in a scandal over his political connections is a candidate for the Democratic Party of Kosovo, PDK, and not his party. However, AAK party militants occupy numerous leading positions at other public enterprises, particularly Kosovo Telecom, as has been reported by BIRN.

Investment in the judiciary

Haradinaj also asserted his coalition’s plans to back Kosovo’s judicial and security sectors with more public money. “A government headed by me would increase financial assistance for institutions of rule of law and security,” he stated.

Haradinaj’s advisor Selim Selimi took the floor, adding that increasing financial support to the judiciary is “giving dignity to the institutions,” highlighting that Kosovo prosecutors’ salaries are the best in the region.

Selimi also promised to increase the capacity of staff in both the police and judiciary, with a growth of 20 per cent in the number of employees. As part of these plans, 2,000 new police officers are envisioned, as well as 100 more prosecutors and 100 more judges.

The establishment of commercial courts in all seven regions of Kosovo was also proposed. These courts are envisioned to only handle cases involving foreign investors that are experiencing problems with their investments in Kosovo, and are aimed at speeding up resolving legal disputes.

Selimi however, did not disclose an estimated cost for these expansions of the judicial system, or how the money would be raised.

The deal has received fierce criticism from civil society and environmental groups but the former prime minister stood firm behind the plan. “There are some people in this hall that think that power plants kill us,” he said. “Even if it is the most modern technology, they say it is bad for Kosovo.”

Regarding hydro power plants, Haradinaj promised that their illegal operation would be a thing of the past under an AAK-PSD government. Under the previous government, two hydropower plants in Haradinaj’s home region of Decan were allowed to continue operating despite not having the required permits.

“No institution will operate without a permit and no new permits will be issued that damage the environment during my governance,” Haradinaj stated.

On health, Besa Baftiu of PSD stated that a precondition of implementing the health insurance system is the functionalization of a database for electronic medical records. She described work on the database as a priority, but did not set a target date for its completion.

However, Baftiu did promise that medical treatment would be free for its citizens as “public health is the state’s responsibility.” Haradinaj added that constructing a local hospital for Prishtina is a priority for AAK-PSD.

Driton Caushi from PSD introduced plans for education, stating that the coalition’s program contains policies that can also contribute to Kosovo’s economic development.

For Caushi, increasing the quality of teaching remains a key priority, and in this regard, an AAK-PSD government would introduce a vetting system at all public universities. “We will start with vetting at public universities, while investigations into plagiarism is also foreseen, as well as taking measures in such cases.”

According to Caushi, higher education should be free, while other provisions are also planned across the education system, including medical examinations, free school meals, and increasing the number of kindergartens to two in each city.

Textbooks are another focus, with Caushi planning to intervene in the current books being used and end the reliance on original Albanian textbooks by using more translated copies of textbooks provided in other languages.

Pranvera Ejupi of AAK promised that both sport and young people would be the focus of an AAK-PSD government, with building stadiums a priority, though no fixed amounts of money were pledged to either. In terms of culture, AAK-PSD candidate for MP Besa Luzha also promised that construction of a Concert Hall would start immediately, and be concluded within the government’s mandate.

On Saturday, the prime ministerial candidate of Democratic League of Kosovo, LDK, Vjosa Osmani will be interviewed for Jeta ne Kosove in the same format. Prishtina Insight will report on each of the prime ministerial debates which will take place over the next two days. All candidates confirmed to be interviewed. However, the Democratic Party of Kosovo candidate, Kadri Veseli, canceled his interview for Jeta ne Kosove, despite previously confirming his attendance.