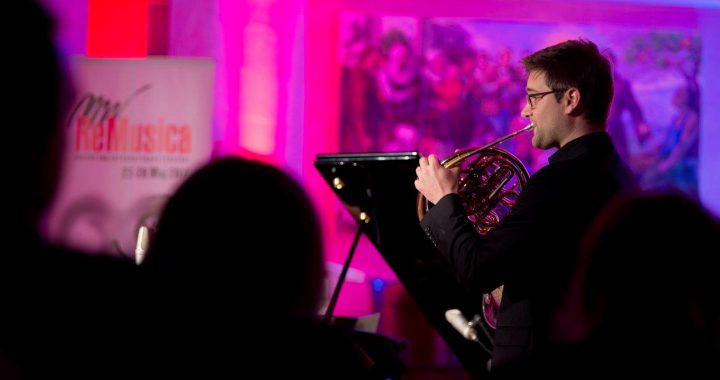 On May 24, the ReMusica Festival, established in 2002 and renowned for featuring artists from around the world, kicks off at the new amphitheater of the University  Library in Prishtina.

Friday, May 24, sees the start of the 18th edition of the annual ReMusica festival, a series of live classical and contemporary music events set between the new amphitheater of the University Library and the Palace of Youth and Sports in Prishtina, running until Friday, June 2.

The festival started in 2002 as an event for musical artists from across the globe. According to Rafet Rudi, composer and founder of the festival, the purpose of the event was to present different stylistic trends from the beginning of the twentieth century to the present day, as well as to encourage new musical expressions.

While in its first years the festival only showcased contemporary music, the organization sought to be more inclusive, and since 2006 classical and local music also became featured. Nowadays, every edition of the festival features different kinds of classical, acoustic and sometimes electronic music from local and foreign cultures.

Donika Rudi, a musician and organizer of the event, sees the festival as a “key pillar of cultural and concert life in Kosovo.” Holding its first edition only three years after the end of the Kosovo war, the festival somewhat marked the beginning of a new era.

From that moment on, the festival has seen itself as an event that spreads musical culture throughout Kosovo. “Since there is no proper cultural infrastructure in the country, ReMusica has been supported by local and national institutions to lead and create a yearly program, which has become an integral part of cultural life in the whole of Kosovo,” Rudi tells Prishtina Insight.

Playing in the library

This year, almost all the performances will take place in the new amphitheater of University Library in Prishtina. With the exception of some educational and youth programs that take place in the morning, the concerts start in the evening at 18:00 or 20:00.

Past editions of the festival were not only held in the amphitheater, but in a wider variety of locations, such as the catholic church in Ulpiana and Hotel Prishtina. These venues were not chosen out of luxury; because of the lack of a concert hall in Prishtina, organizers are continuously searching for a proper hall to accommodate artists who perform at the festival.

“The reason why we changed the locations during these years, is the acoustics,” Rudi says. “Each concert needs different acoustics and different types of hall, especially for vocal and orchestral music.”

Worldly performances, from recitals to opera

In these halls, the walls will echo with the sounds of music from across the world for nine days.

This edition of the festival will be opened on Friday by Guitar Trio Elogio, a group formed in Zagreb that has performed in many European countries. The trio, featuring members from Croatia, Kosovo and Portugal, embodies the spirit of ReMusica, which features classical and acoustic music from different corners of the world.

On Saturday, the group From Austria with Love will perform. Ukrainian violinist Vira Zhuk and Georgian pianist Mariam Vardzelashvili will bring the classical sounds of the composers Prokofiev, Chabashvili, Gander and Peci. They will also play a piece composed by Schubert, who was born in Vienna, where the group has its roots.

On Sunday, Albanian opera singer Vikena Kamenica will bring the sounds of Schubert’s Winterreise with compatriot Merita Rexha Tershana behind the piano. Kamenica became famous through her opera performances at the Albanian National Theatre of Opera and Ballet. The next day of the festival, Monday, May 27, will be all about Albanian pianist Redi Llupa, who is playing a recital in the amphitheater.

According to Rudi, Tuesday evening will be special. Acousmatic music from Belgium will be performed, guided by a confluence of sounds and video footage. “Each year we have our annual concert of acousmatic music,” she says. “Belgium is known for their institutions that specialize in this kind of music and with whom we have had a collaboration through the years.”

Acousmatic music is specifically composed for presentation through speakers, instead of a live performance. The amphitheater will be filled with eight speakers in every corner of the room, to give the audience a unique sound experience. The music is arranged by Belgian composer Clement Parmentier, who in his role as sound designer and videographer is also responsible for the sounds and video accompanying the music.

“The public will be able to listen to the pieces, but what is most important is that they will experience the world of sounds differently,” Rudi explains. “They will feel the space through sounds and through Clement’s specialization.”

The chamber music group Opera Quartet is set to perform on Wednesday. Consisting of musicians from the Albanian National Theatre of Opera and Ballet and teachers at the Tirana Art University, the quartet will play through a number of pieces including works by Mozart and Albanian composer Kushtrim Gashi.

On Thursday, the Kosovo Philharmonic Choir will perform a range of contemporary and classical music, including songs from the repertoire of a variety of different musical artists; from pop and R&B singer Dafina Zeqiri to classical composer Olivier Messiaen. The choir will be conducted by festival founder Rafet Rudi.

The following Friday will be reserved for the tuba and piano recitals of Artemida Qarri Haxhiaj and Thomas Leleu, who is considered the ‘world star of the tuba’ after winning a French Grammy award. The festival will be closed on Sunday, June 2, by the Kosovo Philharmonic Orchestra in the Red Hall of the Palace of Youth and Sports.

Preserving the festival for future generations

Despite the lack of a formal concert hall still being a problem for the festival and the search for a better suited venue still continuing, Donika Rudi has faith in its future. “The fact that ReMusica is implementing the 18th edition of the festival, shows a sustainability which few institutions have in the last 20 years,” she says proudly.

With the festival being awarded with a label from Europe for Festivals, Festivals for Europe, EFFE, in early 2019, the festival is now also, according to Rudi, “integrated into the big family of festivals in Europe.”

The festival’s organizer is enthusiastic about its future, and expects more artists will be interested in taking part in future editions: “ReMusica has an important position in Kosovo and Europe, thus the interest for participation at the festival is, after each edition, on the rise.”