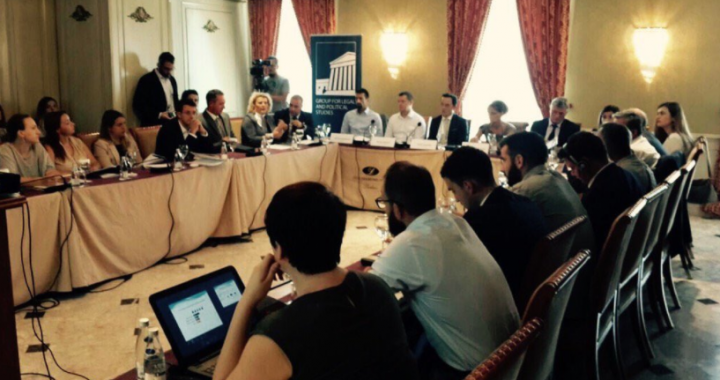 Kosovo public’s opinion has declined regarding the police, courts, and prosecution, claims a new report by the Group for Legal and Political Studies.

There has been a decline in the positive public perception of judicial institutions in Kosovo, claims a new report from the Group for Legal and Political Studies, GLPS.

Police — which until lately had enjoyed the most respect in the eyes of the public — suffered the most significant decline in public opinion. Courts and the prosecution had the highest level of public dissatisfaction. Prizren had the lowest satisfaction with rule of law institutions, whereas Ferizaj had the highest.

The report, titled “Index on the Performance of Rule of Law Institutions in Kosovo,” summarized poll results of 1,065 responders (815 Albanian, 150 Serb, and 100 from other communities) on the public perception of judicial institutions in Kosovo, gathered in August 2017.

According to the report, which was presented at a roundtable in Prishtina on Wednesday, the public said that the institutions which are influenced most by politics are the courts (77.4 per cent), the prosecution (67.9 per cent), the police (41.7 per cent), and the European Rule of Law Mission in Kosovo, EULEX (17.6 per cent).

“It is very disturbing that three fourths of the polled thought that people with strong political support are powerful and are difficult to be prosecuted by the law,” said Albana Merja from GLPS.

During the round table, Ombudsperson Hilmi Jashari expressed his concern regarding the lack of a state mechanism to compensate persons with long case times. “Furthermore, a great number of court decisions fail to be enforced,” he continued, “a fact not stated in governmental reports.”

Jashari also named problems with independence of the judiciary system, as well as systemic issues around budgets, nominations of judges, and insufficient separation of powers in relation to the judiciary — all concerns mentioned in the Ombudsperson’s yearly report.

Mekifete Saliuka of the Kosovo Judicial Council  blames the poor performance of the judiciary on the scarcity of judges and their supporting staff. This results in an overload of court cases, causing delays and risking cases to surpass the statute of limitations. Saliuka also mentioned poor working conditions in courts and rule of law institutions as another factor resulting in their poor performance.

According to Imer Beka, Chief Prosecutor of the Basic Court in Prishtina, budgetary restrictions are the main barrier to proper functioning of the judiciary. He also said that an overload of cases has created problems.

“The problem is that we have suffocated the courts with too many indictments, and the current judges do not have the capacity to solve the high number of cases we had sent them,” said Beka.

According to Betim Musliu of the Kosovo Law Institute, even though Kosovo’s Prosecution Council and the Judiciary Council are technically independent, they are still influenced by politics and interest groups.

Arton Demhasaj of NGO Cohu recommended that the indictments from the prosecution be made public automatically, rather than journalists and civil society having to request them from the courts. According to Demhasaj, this would increase transparency and accountability.