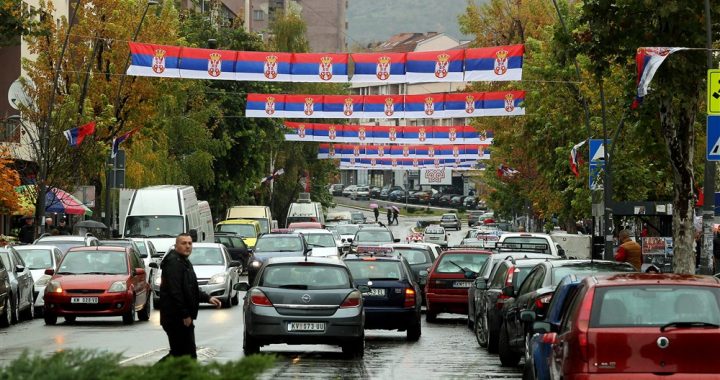 Vehicles move in the streets decorated with Serbian flags in Northern Mitrovica, Kosovo, 06 November 2022. Kosovo Serbs protested after a dispute over license plates and personal documents that triggered a Serb walkout from their jobs in institutions of Republic of Kosovo. Photo: EPA-EFE/DJORDJE SAVIC

Reprimands Issued in North, Kurti Says, while US calls Situation There ‘Worrying’

While Kosovo Serbian officials in the north quit institutions, about 1,012 reprimands have been issued to illegal license plates holders – and one more car has been burned.

Of the 578 resignations offered by Serbian officials in the North in the last few days, 461 are by law enforcement officers, 107 from the border police and 10 from the investigation unit of police.

They have been joined by judges and prosecutors, administrative staff and also by the 10 members of the Belgrade-backed Serbian List in the Kosovo Assembly.

Meanwhile, Prime Minister Albin Kurti told a government meeting that from November 1 until the morning of November 9, 1,012 letters of reprimand had been issued to holders of illegal Serbian vehicle license plates.

“Their problem [of the citizens in the North] are not our decisions nor the deadlines foreseen; 1,012 warnings have been issued as of this morning, no incidents and no complaints recorded. Their problem is bomb attacks, the burning of cars and houses, and pressure and endless threats from those who have a problem with the law. Those who are ordering the abandonment of Kosovo’s institutions are those who are hindered by legality and constitutionality, the fight against criminality and corruption in our country,” Kurti said on Wednesday.

Teams of the Special Unit of the Kosovo Police are supervising the situation at the border point in Jarinje. KFOR and EULEX are monitoring the security situation in the North.

The EULEX mission on Tuesday reinforced its Specialized Police Unit with a reserve unit of 23 gendarmes from the Italian Carabinieri who have been deployed in Fushë Kosovë.

Kosovo Police announced that on Tuesday a car with Kosovo-issued RKS license plates in Zveçan, whose owner was a Serbian citizen, had been set on fire.

After the government ordered the re registration of Serbian license plates with RKS ones, many cars with RKS plates have been burned. It is suspected that these actions are being done by people connected to organized crime in the North.

The Minister of Justice, Albulena Haxhiu, on Wednesday said that they are conducting an analysis of the resignation of Serbian judges and prosecutors from institutions in the North.

“Our opinion is that the people who resigned cannot return to the system, because it is a blow to the system if a prosecutor resigns because of [Serbian president] Vucic’s command. The dismissals must be accepted and competitions for the admission of prosecutors and judges be opened,” Haxhiu said.

The government is not accepting the establishment of an Association of Serb-majority Municipalities or postponing the decision on license plates, which is divided into three phases, until the last phase in April.

The European Union and the US are both asking Kosovo and Serbia to implement all agreements reached mediated by the EU, including the establishment of the Association of Municipalities with a Serbian majority.

The spokesperson of the US State Department, Ned Price, said on Tuesday that the US agrees with the assessment of the EU that the recent developments in the North of Kosovo are worrying.

“They put at risk the important progress that has been achieved in the EU-facilitated dialogue. The removal of Kosovo Serbs from Kosovo’s institutions is not a solution to the current disputes and has the potential to further escalate the situation on the ground. All parties must take steps to reduce tensions and ensure peace and stability,” Price said.

The resignations follow the suspension of Nenad Djuric as police director in the North following his refusal to follow government orders and issue reprimands for drivers of cars with illegal Serbian license plates.