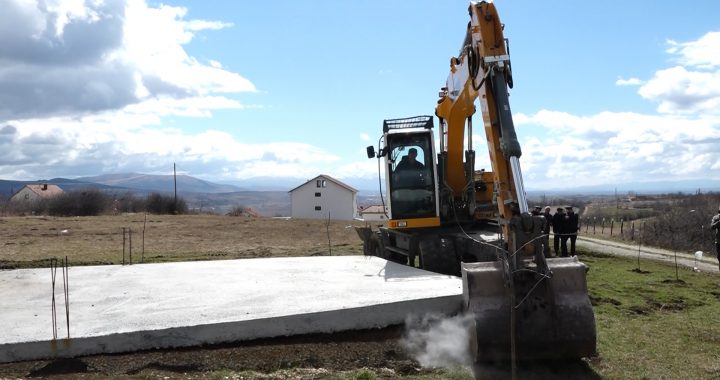 The Ministry of Environment and Spatial Planning demolishes seven foundations of new homes in Hade, a village next to the expanding Sibovc coal mine.

In a coordinated action with the Obiliq Municipality and the Kosovo Police, the inspectorate of the Ministry of Environment and Spatial Planning, MESP, destroyed several house foundations in the village of Hade.

The ministry stated that these actions were taken because the homes were built without permits, despite the protests of the village’s residents.

“It is a common action that the [Obiliq] Municipality, the Ministry of Environment, and the Police took to stop construction in a zone of special [national] interest,” said Bedri Halimi, Director of the Inspectorate of MESP.

For over a decade, the residents of Hade, a village skirting the Sibovc mine, have been struggling with expropriation due to plans to build a World Bank-backed power plant.

Thousands of residents were displaced to Shkabaj, also known as Hade e Re, but the MESP and the World Bank failed to uphold even the World Bank’s own standards when it came to resettling the community.

The highly controversial “Kosova e Re” is the only coal-fueled power plant on earth that the World Bank is considering backing.

The project has stalled and in the meantime, hundreds of residents have been stuck in a limbo. Their property has yet to be expropriated and they are not allowed to build in the area of special interest. They have not been offered any housing solutions, explained Ragip Grajcevci, a Hade resident.

“Hade was declared as a special interest zone around 2003-2004, and we agreed with this ministry, with these dirty inspectors who came here today,” said Grajcevci, visibly angry . “We have sent requests to KEK, the Municipality, the Ministry and the Government, and now these residents aren’t allowed to build in Shkabaj or here, not even a foundation, or home.”

According to Perparim Klinaku, Obiliq’s Director of Inspection, it is not within their competence to find housing solutions for Hade residents.

“We as a municipality do not have it in the scope of our competences–it doesn’t depend on us where they [Hade residents] will be settled. It is within the competence of the Ministry of Environment and Spatial Planning,” said Klinaku.

Ali Mirena, one of the Hade residents whose foundation was demolished, said that he is stuck at a dead end and warned that violent confrontation with the institutions may ensue if the demolition continues.

“We’re all people, we have families, we have children,” Mirena pleaded.