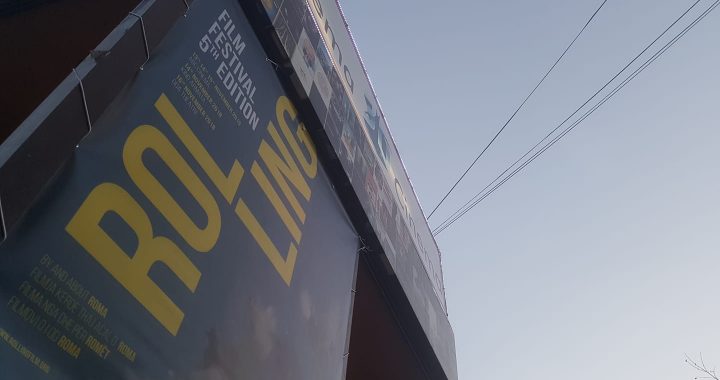 The fifth edition of the independent Roma film festival in Kosovo hosted its opening ceremony on Tuesday, the beginning of three days of films, artistic exhibitions and musical acts across the city.

ABC Cinema in Prishtina was filled to the brim on Tuesday night to celebrate the opening ceremony of the Rolling Film Festival.

The fifth edition, dedicated to the poet and political activist Kujtim Pacaku who died this year in May, opened with a poetry reading of some of his most famous work, accompanied by acoustic guitar and a cinema screen filled with artistic depictions of the Roma MP.

“To quote Kujtim Pacaku, the Romani artist who left a big trace in Roma culture, ‘a person’s best mirror is culture. The richer and better our culture becomes, the richer and better we become,’” said artistic director of the festival, Sami Mustafa, welcoming the audience to the opening.

In his introductory speech, Edis Galushi explained that Rolling is bringing international and national filmmakers together, both of whom are trying to raise the issue of better representation of the Romani people across Europe.

“As with every year, the main aim of the festival is to, through the films, to project the everyday reality of the Roma in the world, and ways how these realities reflect the everyday work of the competent people who are working to improve the life of Roma all around the world,” Galushi.

The festival opened with a screening of the film “Taikon,” a documentary by Gellert Tamas and Lowen Mohtadi that follows the life of the Roma human rights activist in Sweden, Katarina Taikon. Taikon fought throughout her life in the mid-20th century to afford Roma minorities in Stockholm the same rights to permanent housing, education and employment as Swedish citizens.

“The theme of this year’s edition is ‘Change every new day,’ which actually encourages us to work together in order to bring the changes that we need in our society,” said Galushi.

The opening ceremony marks the beginning of a slew of films being played across ABC Cinema and Kino Armata in Prishtina from Wednesday to Friday, which celebrate the contributions of Roma culture to Kosovo and Europe through documentaries and short films made by and for Roma people.

Fifteen feature documentaries will be shown focussing around both cultural issues and exploring the aim of better political representation for Roma people in Kosovo and Europe. All films presented at Rolling will be free of charge.

The organizers noted that much of Roma history and culture has been transferred orally through generations rather than being written down. The film “Papusza,” playing at ABC at 20:00 on Wednesday, documents the life of the first Polish Roma poet to write down and publish her work, exploring the hidden controversies of taking such steps to challenge the traditional depiction of women Roma.

Films will also take place at Kino Armata throughout the week. On Wednesday at 20:45, Thomas Krtochvil’s film “Czechs against Czechs” looks into the xenophobia and other hardships personally experienced by the director living in in one of the Czech Republic’s socially excluded Romani neighborhoods.

The portrayal of the lives of Roma children has taken center stage in this edition of the festival, with Denis Mustafa’s Kosovo documentary “Dream Corners” to be screened on Thursday at ABC at 16:30, as well as Agnieszka Zwiefka’s “The Queen of Silence” following the story of Denisa, a young girl with a love of music and dancing but plagued with undiagnosed hearing problems living in a Roma camp in Poland at 15:00.

Galushi explained that at Rolling this year, special attention is being paid to the education of  young filmmakers in Kosovo. Short documentary films made by Roma youth in the country, Cikore Filmja, with the help of the Rolling Film Festival team, will be shown on Thursday from 19:00.

“We asked Roma youngsters to make 1-3 minute short films with the theme of ten years from now, and ten years before, inspired by the Kosovo 10 year independence anniversary,” said to Prishtina Insight Denis Mustafa, the festival’s project manager. “The films look at what has changed and what could be changed in order to support the young filmmakers.”

According to Mustafa, there will be a host of other events happening around the film program this week.

Jimmy Band, a six-piece musical act from Plemetina that blends Roma music with modern pop will be playing at Beer Garden on Wednesday at 22:15 after the day’s films have concluded.

Mirjeta Qehaja’s paintings will explore the experience of the Roma in connection with the holocaust.

A photography contest for Kosovo Roma youth and artists will also be held throughout the week, named “The other side of everything,” which will be on show at the ABC Cinema, dedicated to encouraging creativity that engages in the deconstruction of stereotypes concerning Roma life in Kosovo.

The festival wraps up on friday night at the Oda Theater with a performance from Gipsy Groove, who play a mix of jazz, pop, ska and reggae connected with Balkan Roma music. Before Gipsy Groove performs, there will also be a surprise warm up act, according to the festival organizers.

To see the full Rolling Film Festival program with this week’s events, visit the festival website and Facebook page.