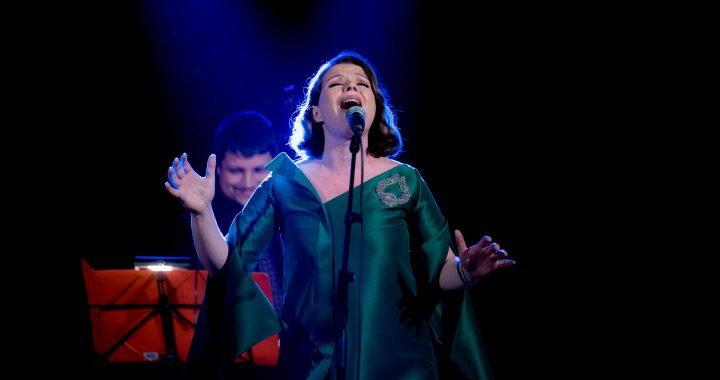 On Wednesday night, at a packed Kino Armata, the Rona Nishliu Quartet debuted their contemporary takes on traditional Kosovo Albanian songs from their new album “Mindil”.

The suspense built in Kino Armata as three members of the Rona Nishliu Quartet, pianist Edon Ramadani, contrabassist Kiril Tufekcievski and drummer Nesim Maxhuni, took to the stage and began to play. Finally, the lead vocalist herself, Rona Nishliu, entered in an elegant green dress, the audience applauding when she reached her trademark high notes.

At the front of the hall, seats were reserved for special guests, including composer and songwriter Rashid Krasniqi, whose well-known song “Mallengjimi” (“The Yearning”) was performed early on in the concert. He thanked Nishliu and her band afterwards with kisses and flowers, right before her fans stormed the stage seeking selfies and autographs.

After the concert, Nishliu told Prishtina Insight that she didn’t expect the composer to be present: “I looked around and I saw this older gentleman, sitting in the front row, and I knew it was him,” she said. “His contributions to music and literature are renowned. It was a great honor to have him here. He showed me his love, and said he was very satisfied with my version of “Mallengjimi”.”

Nishliu’s appreciation for traditional music from composers like Krasniqi has developed as her professional career has advanced. “I was so young when I first climbed on the stage, and eager to try out anything different composers and producers thought I could perform,” she explained. “Over time, I started to hear the call of our traditional music, our cultural and spiritual heritage. There is a very long list of old songs that I really adore. I chose ten of those songs and decided to rearrange them.”

All of the songs on the album – which vary from traditional Roma pieces like Kasmangjesa to more modern songs from Rexho Mulliqi and the MAK Rock Band – are recorded in the style Nishliu’s quartet is familiar with: Jazz.

The style and the group’s reputation attracted a young audience to Kino Armata, despite some of the songs being decades old. “I’m very happy to hear that there were young people in the audience”, Nishliu said. “That is the mission. We want to help this music stay alive. Tradition is very important. If youngsters hear about these songs and the different versions, they will definitely check out the original version.”

Drummer Nesim Maxhuni also believes in the importance of educating younger generations by sharing the songs he himself adored in his youth. “This is our traditional music, our culture; we played this music in our homes every day,” he told Prishtina Insight. “The new generation is very important. We want to educate the new generation, so I was happy when I saw all those young people here.”

The Rona Nishliu Quartet is far from done with traditional and ethnic songs after the premiere. They want to continue performing the songs both in Kosovo and abroad “to introduce an international audience to our traditional music.”

“We simply want to present and celebrate our valuable traditional music and cultural heritage,” Nishliu explained. “I think it is our duty.”