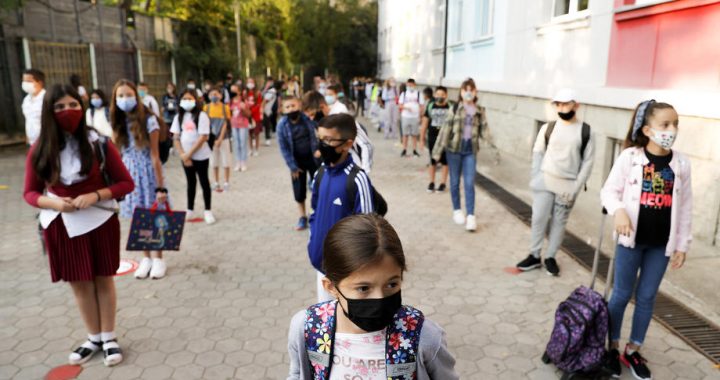 Elementary school students wearing face masks keep their distance on the first day of school in Pristina, Kosovo, 14 September 2020. The government of Kosovo postpone the start of the school year for two weeks due to the current state with the COVID-19 pandemic. Kosovo schools reopened on 14 September for the first time since March 2020 when the COVID-19 Coronavirus crisis started. Photo: EPA-EFE/VALDRIN XHEMAJ

Pupils have returned to school after more than a month of strikes in education that have been suspended till January but not terminated.

September 1 should have been the first day of the academic year for almost 320,000 pupils in Kosovo. Due to strikes in education, however, school pupils are starting their classes one month late, on October 3, together with university students.

The Union of Independent Trade Unions of Kosovo announced on Saturday that it had suspended the strike that began on August 25 in public administration and education until January 2023.

The head of the teachers’ union, Rrahman Jasharaj, told a press conference on Saturday that the strike had not stopped but was only being suspended. He urged the government to take advantage of the suspension of the strike and reflect.

“Let the government and the public know that the strike is not ending but is being suspended until January 2023. This result is enhanced by the declaration of other trade unions, whose report states that out of 25 trade unions, 24 have declared in favour of suspending the strike,” said Jasharaj.

Jasharaj said the lessons lost during the strike will not be replaced.

The Ministry of Education has said that it had made all the necessary preparations for the new school year to begin on September 1, when classes were supposed to begin, but that this was not realized due to the strike organized by the union.

In a statement for Sunday, the ministry announced that on Monday it will form a working group to review the calendar of the school year and, based on that, rescheduling will be done in schools.

“Municipal Directorates of Education will ensure the smooth running of the learning process. The Ministry of Education invites cooperation and mobilization of all without distinction to make up for the losses caused during the strike,” the announcement said.

The Council of Parents of Kosovo reacted to the decision of the Teachers’ Union, urging strikers to ask themselves and each other if it was worth it, keeping pupils out of schools for five weeks.

“After five weeks of strikes, the leaders of the Teachers’ Union, as well as the members of the union, have the responsibility, at least humanly, to ask themselves and each other: was it worth it and can they feel proud of the strike?” their statement said.

The strike was countered with protests by Parents’ Councils in Peja, Prishtina and Gjakova.

Regardless of the suspension of the strike, there is still no final agreement between the government and the unions. The government has offered an extra 50 euros a month to all education sector staff to cope with inflation, until the new Law on Salaries is passed by parliament. The union insists on an extra 100 euros per month.

Even after suspending the strike, unions have demanded that the government fulfill its promises regarding the Law on Salaries.

The government promises that the new Law on Salaries, which foresees an increase in teachers’ pay, will be approved soon.