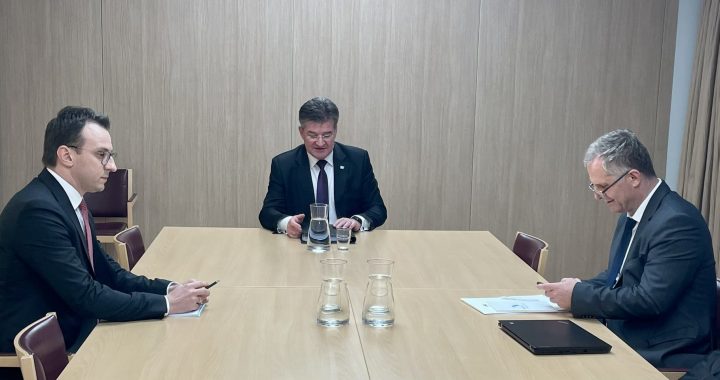 Serbian and Kosovo leaders give very different interpretations of the deal on license plates brokered by the EU on Wednesday night.

Serbian President Aleksandar Vucic said existing “KM” number plates issued for Kosovo Serbs in the northern town of Mitrovica, and used throughout Serb-majority northern Kosovo, will remain in use despite the agreement reached between Serbia and Kosovo with EU officials on Wednesday night in Brussels.

Vucic said that there are around 7,000 such vehicles in Kosovo and some 2,000 in Serbia and that their owners will “continue to drive those cars without any problems and without any fines”.

EU Foreign Affairs chief Josep Borrell on Wednesday stated that the deal between Serbia and Kosovo means “that Serbia will stop issuing licence plates with Kosovo cities’ denominations, and that Kosovo will cease any further actions related to re-registration of vehicles”.

The dispute about Serbian-issued licence plates triggered mass resignations of Kosovo Serbs from institutions in Serb-majority municipalities in the north of Kosovo at the beginning of November.

Bislimi told media in Brussels after the meeting that “the agreement will open the doors for intense negotiations on the plan [for normalisation of relations between Kosovo and Serbia] proposed by the EU and supported by Germany and France.

“Serbia will stop registration and re-registration of cars [with Kosovo cities’ denominations] while Kosovo will stop imposing fines and giving reprimands. Fines and reprimands are suspended,” Bislimi added.

Petkovic said after the meeting that “this agreement means that there is no punitive policy against Serbs who drive cars with KM plates” and that “all car owners who have KM plates will be able to register their vehicles normally and extend the validity of KM plates”.

According to the law in Serbia, vehicle owners get new plates when registering their vehicles for the first time and then every year have to renew registration, which in practice means getting a new sticker that has to be put on the windshield, while plates and registration numbers remain.

Support for the deal

US State Department spokesperson Ned Price said the US “welcomes the agreement reached between Kosovo and Serbia on measures to avoid further escalation of tensions”.

“We welcome the decision by the parties to put the interests of all their people at the forefront of their decision-making and take steps to improve the everyday lives of their citizens,” he said in a statement.

Besides the plates, according to Borrell, Serbia and Kosovo also agreed “to fully concentrate, as a matter of urgency, on the proposal of the normalisation of their relations, as presented this September by the EU facilitator and supported by France and Germany”.

“The EU will ensure that key issues and principles related to normalisation will be addressed in the context of the proposal. The Parties understand that all past Dialogue agreements must be implemented”, Borrell said.

The head of Kosovo’s opposition Democratic League of Kosovo, LDK, Lumir Abdixhiku, said on Thursday that his party welcomed the agreement and added: “The only way to guarantee Kosovo’s success is close coordination with strategic partners, especially with the US.

“LDK sees the populist drama created by the country’s institutions as totally unnecessary. The return and acceptance of the same agreement, after all the drama, shows a lack of seriousness by current state leaders,” Abdixhiku wrote on Facebook.

Ramush Haradinaj, of the Alliance for the Future of Kosovo, AAK, also supported the agreement. “I welcome the agreement on licence plates. Now let the final agreement close with recognition [from Serbia], under American leadership,” Haradinaj said.

Vucic told media that Kosovo “two days ago had, in my opinion, a better deal than they got yesterday”.

“It is important for us that the [Borrell’s] communiqué clearly states the necessity of fulfilling and implementing previous agreements, which is of key importance,” Vucic said.