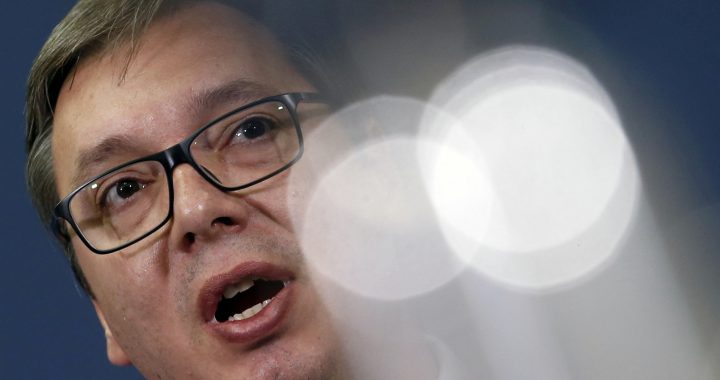 In an interview for Radio Television Serbia, RTS, Serbian President Aleksandar Vucic criticized a penalty of 30,000 euros administered to Belgrade-backed Kosovo Serb political party Lista Srpska. The fine was announced on September 27 by Kosovo’s Elections Complaints and Appeals Panel, ECAP, the body responsible for assessing procedural violations by political parties during the election campaign in Kosovo.

“Lista Srpska is experiencing terror and real political persecution in Kosovo, organized by the so-called institutions and backed by the international community,” Vucic told RTS.

The fine was issued after both BIRN and the Kosovo Democratic Institute, KDI, complained to ECAP about a promotional video for Lista Srpska, claiming it violated electoral legislation barring political subjects from publishing material inciting hatred or violence.

The video featured a voiceover stating: “When it is difficult, only together we win. In protection of what is ours, when Serbia calls, I give my vote.” According to BIRN, the statement violated Kosovo’s “constitutional order” as it invited “the jurisdiction of another state” into Kosovo and contained “an incitement of hatred against the majority community in Kosovo.”

ECAP approved the complaint, stating in its judgement that: “The clip has messages that incite and provoke hatred towards the existence of the state of Kosovo. According to the panel’s assessment, using such language incites hatred towards others.” Lista Srpska was given 15 days to pay the fine and the right to appeal the decision at the Supreme Court within 24 hours.

Responding to the decision, Lista Srpska said that the video was created in order to encourage greater voter turnout from Kosovo Serbs at the election and was not intended to provoke or incite any act of violence.

It is not the first time Lista Srpska have been fined on such grounds. During the 2017 parliamentary election campaign, Lista Srpska was fined 22,000 euros for a similar clip, again following a complaint from BIRN.

In his criticism, Vucic also claimed that other incidents had been ignored. “The ‘Great BIRN’ has complained about hate speech,” Vucic said. “Isn’t it hate speech when the party of Rada Trajkovic and Nenad Rasic call Lista Srpska ‘a monster’ in Albanian?”

Vucic is referring to a promotional video produced by the Kosovo Serb Sloboda coalition, who are running against Lista Srpska and do not have the backing of Belgrade. In the video, Sloboda candidate for MP Nenad Rasic refers to Lista Srpska as “a political monster.” No complaint has been filed about the video according to the ECAP list of complaints.

Numerous parties have been fined during Kosovo’s 2019 electoral campaign, which officially started on September 25. Thousands of euros in fines have been administered for violating election rules; from exhibiting posters nearby educational institutions and religious sites to appearing with children in promotional material. BIRN has continually filed complaints for such violations, which has resulted in a total of 59,100 euros worth of fines issued against various political parties and coalitions.