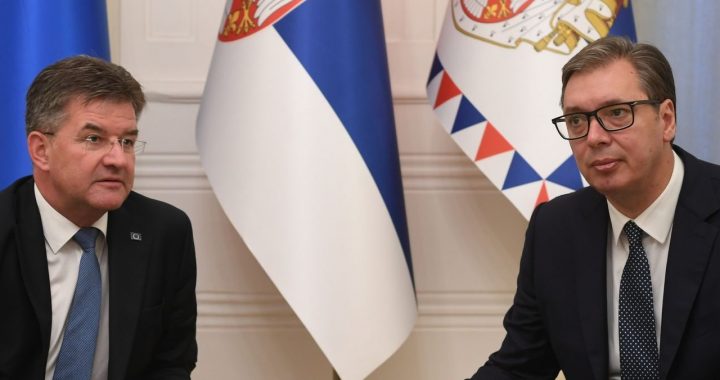 Serbia’s Vucic: ‘No Agreement Yet’ over Kosovo Licence Plate Dispute

Serbian President Aleksandar Vucic said after meeting EU and US envoys that no deal has yet been found to resolve a dispute with Kosovo over vehicle licence plates that has sparked border protests by Serbs.

President Aleksandar Vucic said after meeting the EU and US envoys for Kosovo, Miroslav Lajcak and Gabriel Escobar, in Belgrade on Thursday that the “talks were not easy” but efforts to find a deal to resolve tensions with Kosovo over vehicle licence plates will continue.

“We will continue the talks and I believe that in the days ahead we will be able to reach a compromise solution, at least for a small part [of the dispute],” said Vucic.

However that he warned that Belgrade and Pristina remain far apart on the issue and “regarding the licence plates and some major issues such a solution cannot be reached at all”.

Lajcak and Escobar visited Belgrade after Pristina as part of their attempt to bridge differences between Kosovo and Serbia ahead of September 1, when the Kosovo authorities intend to bring in regulations on vehicle licence plates and ID documents for border crossing which Serbs strongly oppose.

After a second round of meetings with Vucic on Thursday night, Lajcak said that he hoped that “we are on the right track”.

“I appreciate Serbian president sincere effort to support a European solution. Our talks will continue,” Lajcak wrote on Twitter.

US envoy Gabriel Escobar said that talks with Vucic were “tough and long”.

“We appreciate the President’s commitment to peace and stability. The work continues,” the US embassy posted on Twitter as Escobar’s statement.

Escobar and Lajcak also had talks on Thursday with representatives of Serbs in north Kosovo, but the meeting was closed to media.

There have already been protests over the licence plates issue and there are fears that there could be violent incidents on September 1 when Pristina intends to start imposing the new regulations.

The changes announced by the Kosovo government triggered renewed tensions at the end of July when Kosovo Serbs set up barricades and Kosovo police closed the country’s border crossings.