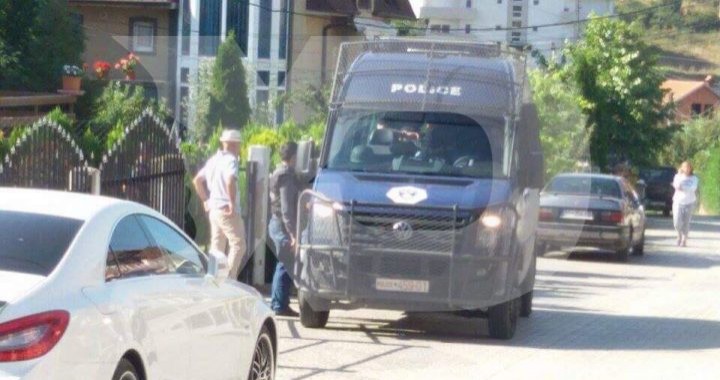 Activists from the opposition party Self Determination Movement, Vetevendosje, were arrested on Tuesday based on suspicions that they were involved in the explosive attack outside of the Kosovo Assembly building on August 4th. The arrests come after a string of explosive device attacks have occurred in Prishtina over the past month.

On the night of August 4, two days after a debate on the demarcation agreement with Montenegro took place at the Kosovo Assembly, an explosive device was thrown at the assembly building.

A few days later on August 9, another explosive, rendered harmless by Kosovo police, was found on top of the home of Murat Meha, the head of the state commission for demarcation. On August 22, a hand grenade shook the building of Kosovo’s public broadcaster, RTK. Finally, on Sunday night, an explosive device was thrown near the home of Mentor Shala, director of RTK.

No casualties have been reported to have resulted from these four attacks.

The six individuals arrested are Vetevendosje activists. Krasniqi is a spokesman for the opposition party.

A press release administered on Tuesday by Kosovo’s Special Prosecution in collaboration with the Kosovo Police announced the names of those suspected to have planned, organized, and executed the attack on August 4. The press release states that the six suspects, who will be in detention for the next 48 hours, have even “taken responsibility for carrying out this attack.”

Ademi’s lawyer Tome Gashi, along with Krasniqi’s lawyer Naim Rudari, have confirmed that the six suspects were arrested under suspicion of terrorism.

“Based on the Special Prosecution report, all of those are under suspicion of terrorism which, according to them [the Prosecution], is to do with the attack on the Kosovo Assembly on August 4,” Gashi said.

However, according to the lawyers, no personal statements have been released by the suspects.

“[Ademi] did not give any testimony because it is a bit frightening for a person like him who is a jurist by profession to be investigated for these kinds of criminal offences,” said Gashi.

In a press conference, leader of Vetevendosje Visar Ymeri said that the arrests are “classic acts of persecution against political opponents.”

According to Luan Keka, the police’s anti-terrorism director, the evidence collected also includes proof that the suspects bought the motorbike used by the attackers on August 4th.

But Dardan Molliqaj, general secretary of Vetevendosje, said that none of the evidence confiscated by the police are related to attack on the Assembly.

Molliqaj said that the arrested Vetevendosje activists were beaten by the police during interrogation. He appealed to institutions and organizations that deal with human rights to monitor their treatment at police stations.

Vetevendosje has called for citizens to gather in Prishtina to protest against the demarcation deal with Montenegro on September 1, the same day that Kosovo MPs are due to vote on its ratification.