As women in Kosovo cross the border in hopes of better healthcare, public and private health institutions in Kosovo and Macedonia are not publishing reliable data fundamental to improving public policies for sexual and reproductive health.

It was the start of an ordinary day for a nurse working at a medical clinic in the outskirts of Skopje, the capital city of Macedonia.

Ana (whose real identity will be protected), a nurse at the gynecological department of the clinic, learned about a patient whose situation the clinic had never seen before.

A young girl, a minor according to the nurse’s description, sought help at the hospital for pain in her stomach. However, the doctors found that she was 20 weeks pregnant, and neither her nor her parents – who she had gone to the clinic with – were aware of it.

“She said that she initially had stomach aches, and we later found that she was 20 weeks pregnant,” Ana said. From what the nurse was able to discover, the girl was from Kosovo. Ana hesitated to talk about what became of the girl’s unwanted pregnancy later on, alluding that she does not know for certain. The clinic itself offered no answers.

Ana said that she has rarely seen cases like this at the hospital, but that there are many women from Kosovo with unwanted pregnancies who seek abortions at her clinic.

“Sometimes we ask them about their marital status, and sometimes not. In most cases we do not speak to them too much because they do not speak Macedonian, and most of them are young and speak English. They receive the service and leave,” Ana said. “We have an administrator who speaks Albanian, and he often communicates with them about procedural issues.”

Despite this, Ana said that for those working in healthcare, it is rare to ask non-Macedonian women about the reasons for their abortion.

“It is normal for us who work here, but it does not interest us that much, if somebody wants an abortion at 18 or 22 years old, it is her choice. Whether they have a sex life or not, it is simply normal to us. A conversation about abortion between two neighbors may be strange, but not at the hospital,” she said.

At the University Clinical Center of Kosovo, QKUK, it is confirmed that young girls who are refused their requests for abortions by the professional committee –a board of three officials from the clinical center that approves abortions that have passed the ten week limit stipulated by law – and there are cases where they look for other solutions, including in Skopje. 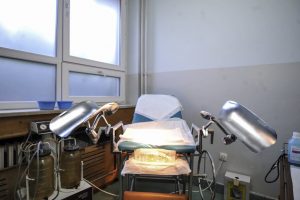 Authorities both in Macedonia and in Kosovo are aware that hospitals in Skopje can be a better alternative for Kosovo women who seek abortions.

“We hear that if the committee refuses her after the tenth week [of pregnancy], she goes to Skopje… They come here, we have cases when they are in the fourteenth week, why terminate it? Or in the fifteenth week, it’s murder,” the chief of reception at the gynecological clinic at the QKUK said.

It would not be surprising for people in Kosovo to hear that women have been seeking medical help across the border, it is common knowledge that that clinics in Skopje receive patients from Kosovo who mostly seek to receive the better healthcare services they provide there.

Director of the Sanitary and Healthcare Inspectorate in Macedonia, Irinka Sotirova-Buhova, is aware that there are patients from Kosovo that carry out abortions in Macedonia.

She said that in Macedonia, legal abortions are available at all healthcare institutions that have working permits covering the procedure, issued by the Ministry of Healthcare. However, data on patients registered to receive healthcare from Kosovo is property of Macedonian state institutions, and in public institutions, they do not ask for information on patients related to their country of origin.

Regarding institutions that operate without licenses, Sotirova-Buhova said that it is difficult to find data because abortions are not evidenced.

“Regarding the issue of unterminated pregnancies, the State Sanitary and Healthcare Inspectorate, in line with the law, acts according to the request. Often, there are complaints of complications for an abortion that happened,” she said. “However, the inspection on the ground in these cases does not generate results, because as the procedure is illegal, we cannot find data on the patient at the healthcare institution.”

Sotirova-Buhova said that her inspectorate in Macedonia has very constructive relationship with the Healthcare Inspectorate of Kosovo. The two bodies have agreed to address any “sore points” regarding patients and their examinations that are carried out in private healthcare institutions in Macedonia.

The chief inspector at the inspectorate in Kosovo, Ardita Baraku, despite confirming multiple meetings with her Macedonian counterpart in 2018, says that she does “not remember” addressing the topic of abortion.

“We discussed about the possibilities of collaboration, but I do not remember that this point [abortion] was touched upon,” she said.

One of the four clinics contacted, “Acibadem Sistina,” was asked whether Kosovo patients carry out abortions at the facility. In that hospital, abortions cost 9,000 denars, or about 150 euros. The price is the same for all patients.

Representatives of the clinic did not offer data regarding the age or the week of pregnancy of women and girls from Kosovo who request abortions. However, they did not deny that there are cases and requests. In a written response from “Sistina,” they stated that the clinic does not give details regarding patients’ data.

“The Acibadem Sisitina Hospital is a private and accredited hospital with the highest standards, and it respects the rights and privacy of its patients, and for this reason we do not think that it is proper to give information on examinations and operations,” the response reads, although the question was only about the age and week of pregnancy of women who received abortions, and not their identities.

The clinic where Ana works did not provide further information about the patient who sought help in the twentieth week of her pregnancy, or how the situation was resolved. However, this is not the only private clinic in Skopje which was asked about the number of requests for abortions by Kosovars.

A nurse from the “Sante Plus Hospital” briefly confirmed that the hospital has Kosovar patients who request abortions but did not give any figures. Still, she said that most abortions happen for medical reasons. Another private clinic, “Neuromedica,” said they forwarded the questions to the administration, but then did not respond. “Remedika,” considered the second largest clinic after “Acibadem Sistina,” also did not respond.

“According to our available data that we gather from Public Health Centers, the tendency [for abortions] has fallen in the past ten years, but as a public healthcare worker, I think that we need to improve the quality of data for better recording and pinpointing of illegal abortions, which are important to the real number of abortions and to the improvement of public health policies, especially sexual and reproductive health,” said Sotirova-Buhova.

On the other hand, there is an emerging debate in Macedonia about changing the law on abortion, which, as in Kosovo, allows abortion for family planning reasons until the tenth week of pregnancy, and only for medical reasons afterwards.

The last amendment to the law, approved in 2013 after a fast track procedure at the Macedonian Parliament, was followed by a series of protests from NGOs and citizens. The amendment obligates women to sign a written consent agreement for the abortion and attend mandatory counseling for three days before the abortion.

With the potential changes to the law currently being processed, the Macedonian Healthcare Minister Venko Filipche said that, among others, women will be able to carry out their abortion within the day and not wait three days for counseling, and instead of the 10 week requirement, abortions without the requirement for committee approval before they are carried out will be allowed until the twelfth week.

Regarding patients from Kosovo who seek abortions in Macedonia, Filipche said that it has been years since any patient from Kosovo requested such services in public hospitals. However, he said that they do not have data on Macedonians either.

“At our Ministry of Healthcare, we do not keep track of the number of abortions, neither for our citizens, nor for foreigners. Other healthcare institutions do this,” he said, stating that he is  aware that there are such requests for abortions in private clinics.

Public and private clinics in Kosovo, or in other countries, are not the only options women utilize for abortions. Without trustworthy and transparent public institutions that provide adequate care and reliable data, these women can be left in a dangerous position.

Era Istrefi among Politico’s 28 who ‘will shape Europe’

by Plator Gashi
Next: Big Deal